The Draft Budget That Inflamed Protests in Iran 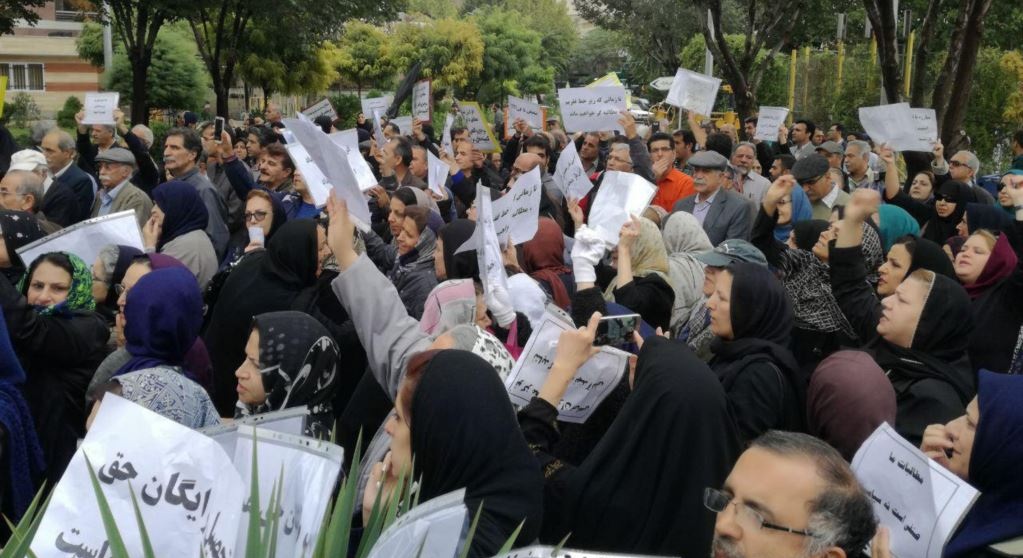 Protesters gather in Tehran on January 1 to protest the poor state of the economy. Image from IRNA news with the rights to republish.

This piece was originally published on January 8, 2018, on the website of Arseh Sevom, a non-governmental organization that promotes peace, democracy, and human rights for Persian-speaking communities.

A budget proposal that many workers and struggling households feel doesn't recognize their needs is at the heart of protests in the Islamic Republic of Iran.

Protests against the budget bill began as soon as it was introduced on 10 December. Teachers, bus drivers, unions, and retired people were among the first to take to the streets in front of parliament.

It was the first time that an entire draft budget was published at once. “By publishing the entire budget at once,” journalist Mostafa Khosravi told Global Voices, “the corruption at the heart of the system was more apparent.”

There are questions about funds going to religious and cultural organizations that lack transparency and accountability. Many of those organizations are unknown to many in Iran.

It's widely believed the national protests began in the north-eastern city of Mashad. However, 10 days before the break out of the national protest movement, citizens were already publicly expressing their anger on the streets at the draft budget. On the message sharing app Telegram, member of parliament Mohammad Taghi Akbarnejad shared his experience walking anonymously among people demonstrating in front of the parliament building:

I was in the middle of the protests, and a woman in her late 50s came to me and asked, ‘Are you an MP?’ I answered, ‘I am here like you.’ She told me, ‘If you can go to parliament, tell them I made a mistake becoming a teacher. You’ve turned as all into beggars. Please tell Mr. Khamenei, tell the president, tell everyone, tell them we are desperate. We don’t need this revolution. We hate the clerics.’

Later a woman in her 60s approached me calmly to tell me to hide my clerical robe. ‘The people are thirsty for your blood!!!’

I didn’t take any of this personally, I tried to show solidarity.

For many, the draft budget promises to exacerbate already desperate economic conditions.

Iran’s foreign policy is a particular target of anger. Protesters are irate that money is being directed to support wars in Syria and Yemen, as well as proxy actors in other countries such as Lebanon. One of the chants that has been heard in past demonstrations and again in these is: “Neither Gaza nor Lebanon, I give my life only for Iran.”

If parliament passes an increase on gasoline prices, the Revolutionary Guards will also receive a significant increase in funding: a 120% increase. The budget of Iran's militia, the Basij, is nearly the same as that of the regular military. In addition, the budget of The Quds Force (the secret wing of Iran’s Revolutionary Guards and active in Syria) is completely hidden from the public. While these grievances against this imbalanced national spending is not new, it seems it has come to a fever pitch after the high hopes expected for economic prosperity following the lifting of sanctions in January 2016.

“It’s corruption that people are railing against,” said analyst and journalist Pezhman Tavahori in an interview. “People feel that ending corruption will alleviate poverty.”

One objective of Iranian government is to spread Shia Islam in the region. That's an expensive mission, in terms of lives and finances. On Buzzfeed, journalist Borzou Daraghi wrote:

Ever since the US invasion of Iraq in 2003, Iran — a Shiite state — has had its eyes on its Shiite-majority neighbor, intent on taking over the levers of power, commerce, and the military. But this is just one part of Iran’s wider goal: to establish territorial dominance from the Gulf of Aden to the shores of the Mediterranean.

Can Iran’s Supreme Leader compromise on foreign policy goals in order to address some income inequality and financial suffering? Tavahori thinks not:

The current demonstrations may be suppressed, but the anger won’t end. I don’t think the Supreme Leader will give up this policy. Poverty and corruption will continue and before long people will be back on the streets