What's In a (Nick) Name? Ask the Caribbean! 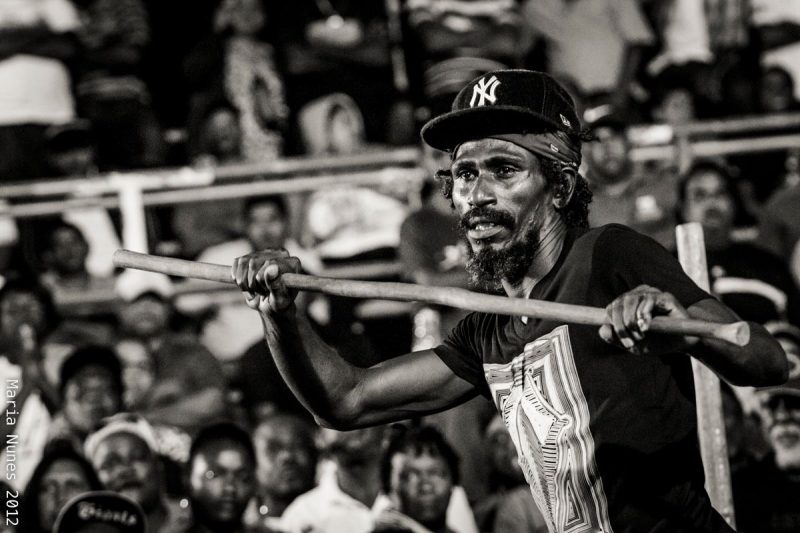 One of Trinidad and Tobago's legendary stick-fighters, David Brown, whose nickname is “Acid”. He is also known as “King David” or “Master of Pretty Stick” and, according to his bio from the “No Bois Man No Fraid” film media page, he comes from a long line of famous stick-fighters, some of whom had the nicknames “Birthright”, “African King” and “Harold”. Photo by Maria Nunes, used with permission.

Call it a leftover from its colonial past, when indigenous people and the very lands they occupied were reassigned Eurocentric names, but Trinidad and Tobago (indeed, the Caribbean as a whole) tends to have a preoccupation with renaming things.

The region has rebranded airlines, airports, buildings and by-ways, perhaps in an effort to reclaim some portion of its identity from the erasure it suffered.

The lighter side of this, of course, is that practically everybody in the Caribbean has a nickname — and not just a shortened version of their given name. Calling William “Will” or Pamela “Pam” is for those uninitiated in the art of creative christening. No, Caribbean people prefer nicknames like “Clock”, so declared because one of the arms of the young man in question was longer than the other.

Recently, Trinidadian photographer Maria Nunes shared a few nicknames she'd come across while transcribing interviews for a project, and she asked other Facebook users to chime in with “any classic nicknames of people [they] know.”

It led to one of the most quintessentially Caribbean Facebook comment threads. Here are a few of the highlights:

Many nicknames came about as a result of good, old-fashioned teasing. Kristal Ettienne recalled how she came to refer to a cherished neighbour:

Ole shirt – I called a man in my neighbourhood that after he teased me a day when he was wearing an old shirt. 20+ plus years later it's what we call each other on sight. I forgot his real name until my mother said it.

Other stories, like the one Avery Ammon told, were a bit more peppery:

‘Wine on meh [my] nose'; a certain deceased police inspector who was repulsively christened by one unpaid lady of the night […] so any way his full name became ‘Wine on meh nose Not meh glasses’ […] if you wanted to hear a police cuss then call him out…

Some nicknames, like the ones Tameika Mungo shared, had numerical significance:

Twice – he was an apprentice in my grandfather's woodwork shop. One day he cut his hand on a machine and mom went to dress it for him. When she had put methylated spirit on it, he literally ran around workshop twice screaming. And the name was born. Also the next apprentice that came and joined him at the workshop, we just called him ‘Triple’.

Filmmaker Kim Johnson knew of quite a few original monikers, including “Tobacco Kid (smoking since he 10, they say if he kiss a girl he give her lung cancer)”, “Barrel (was kinda tubby)”, and “Akanah (I thought it was African but he was Jamaican and his name actually O'connor)”.

Many nicknames were inspired by their owners’ personalities, characteristics or physical attributes:

Goggy, whose glasses were so thick they resembled goggles; Whisper, cos his voice was so loud; Tuki, cos his lips were as thick as a toucan's. […] Leech (who sucked all the vitality out of the class).

Tillah Willah chimed in about “a boy so obese he was called ‘Allyuh'”. (“Allyuh” is a Trinbagonian term typically used when casually addressing a group of people.) Most of the nicknames were funny to those doing the naming, but it was different being on the receiving end. Responding to Tillah, Amohr Recneps said:

Oh I [was] called that for the entire first term I entered Tunapuna Government Secondary by the boys not the girls. I was called Allyuh and Them and they would literally run or clear the way for me to pass. I laughed with them about it tho it hurt but it was my way of overcoming the rejection. Nowadays they call it bullying but by the time I hit third form the heckling done and I was just another regular girl. […]

Quite ironically, one unfortunate nickname was bestowed upon its owner because of a heroic act:

Cacadiver – given to him after he jumped into a latrine to rescue an old woman that fell in.

Also giving the thread its flavour was the fact that many commenters were familiar with the nicknames — and their owners. Its own form of oral tradition, the knowledge was passed along from person to person and sometimes even from generation to generation.

What was the nickname of the well endowed homeless guy who frequented downtown in the nineties most times with very little if no clothes on?

Popular culture definitely played a role in some of the names like “Planet”, who was “hairy like an Ape”, as was Trinbaonians’ bent for stating the obvious. “Sparkle Plenty”, for instance, was the nickname of a woman who “had a penchant for cheap jewellery”.

Some nicknames had such staying power that they were used more regularly than proper names. Nunes herself recalled:

One of my personal favorites is that Carlos Baynes from Tobago, one of TTs Best golfers ever, is known by one and all, child and elder, as SEXY. All up and down the Caribbean. Even in newspaper headlines.

This is not unusual; in fact, even a person's close friends may not know his or her given name — the nickname becomes the handle to go by. In a conversation that Nunes and jazz trumpeter Etienne Charles were having about this very topic, Charles remarked, “Sometimes, the only time you ever find out people's real names is when you go to their funeral.” 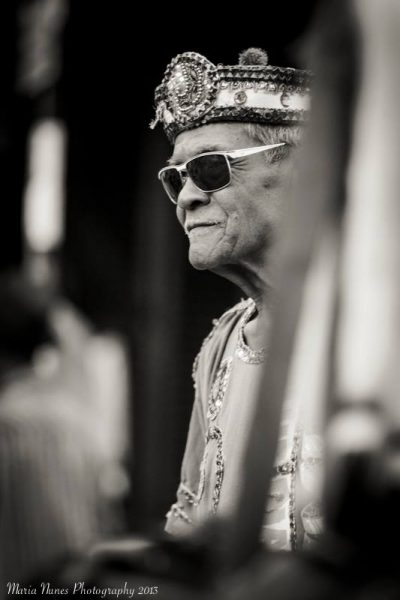 Carnival designer and wire bending artist, the late Narcenio Gomez, more popularly known as “Senor Gomez” or “By So, By So”. Photo by Maria Nunes, used with permission.

This was certainly the case for one of the nicknames mentioned on Nunes’ thread. The late Narcenio Gomez, a master wire bending artist who used to play traditional sailor masquerade in the country's annual Carnival and whose talents richly contributed to the national festival, was better known in Carnival circles as “Senor Gomez” — but his daughter had another story of a nickname that lives on after his death:

My late father when he was having a good time and his friends saw him, they would ask him where he was going and he said ‘By So By So’ that was only one of his many nick names ‘By So’

The nickname phenomenon also transcended language. There was a nod to the Spanish-speaking Caribbean with “NOSEotros” and Janine Mccollin-Lissandre shared:

Interestingly, in the little French village my husband's family is from, there was a fondness for hilarious nicknames too. There were names like ‘quequette téléguidée’ (loosely translated as ‘guided willy’), whose mother also became known as ‘la mère quequette”…

She also remembered hearing of a miserly shopkeeper “from whom getting anything on credit was as hard as getting water from stone. So the villagers called him ‘Stone’ and his children ‘pebbles'…”

Certain nicknames seemed to be wickedly appropriate, such as one teacher's nickname, “Totee Muff” (a “totee” is West Indian slang for a penis). Yao Ramesar explained:

He had a totee-shaped toupee with a Brillo Pad finish. We hooked it once with a fishing line lowered through the louvers in the infirmary. I remember gauging things from the reflection in their glass. He freaked out & started cussing, but we didn't get caught.

There was my merry-making uncle who was a well-known reveller and party animal. His nickname was TANTANNAH! cuz he never entered a fete, party, blocko, jam session, carnival band or family celebration without announcing his own presence with his long arms outstretched before him and making a loud trumpet-like fanfare with his mouth ‘Tan tan naaaahhhh!!’

Then there was this gem:

In a region that is known for heckling or “picong” (finding clever, often acerbic things to say in any situation) one thing is for certain — when it comes to nicknames, Caribbean people don't do it halfway.