Corruption and Poverty Lead to Rage and Despair in Iran 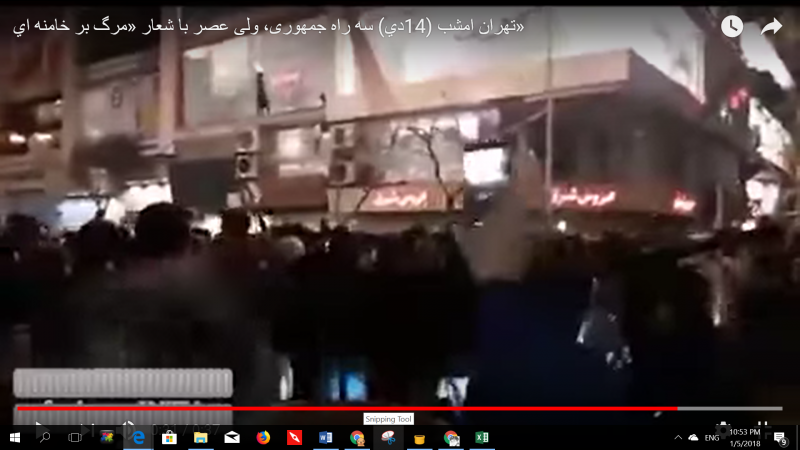 Screenshot from video of protests in Tehran from January 4, 2018. Available on YouTube: https://youtu.be/hNNVlONyNGs

This piece was cross-posted on the website of Arseh Sevom website, a non-governmental organization that promotes peace, democracy, and human rights for Persian-speaking communities.

“Where’s my money?” That’s what many in Iran have been asking over the past few years as they’ve watched inflation and corruption decimate their earnings.

Inflation has hit the poor and working class the hardest. The costs of food, utilities, and healthcare have risen dramatically over the past five years. In 2013, the cost of food increased by just over 57%; in 2017, it rose by a further 13.9%. Meanwhile, the youth unemployment rate hovers at about 25%.

Simply put, there is plenty of economic despair to go around. But it doesn’t end there. Desperate people have invested in pyramid schemes that enriched a few at the cost of the many. Workers all over Iran have waited up to a year to be paid for completed work. This traps them in inescapable debt and many land up in prison for using bad checks, placing even more stress on already struggling households.

In the last half of 2017, there were near-daily protests in front of Iran’s parliament. Teachers, laborers, and bus drivers demonstrated to demand higher pay and better working conditions. This is not new: these protests are more than a decade old now.

The Islamic Republic of Iran has been unable to deliver the freedoms and financial stability that its citizens long for. Some of this is the result of sanctions imposed by the United States; much of it, however, is due to corruption and bad governance.

US-imposed financial sanctions have actually provided excuses for bad planning and rampant corruption. As long as they are in place, the Iranian government can hide behind them, blaming everything from milk shortages to poor aircraft maintenance on sanctions.

Meanwhile, those who learned to game the system have raked in the big bucks. A perfect example is Iran’s Babak Zanjani who became a billionaire many times over thanks to international sanctions against Iran and his clever manipulation of his position as the Islamic Republic’s money launderer. In late 2013, he was arrested.

We’re not all in this together 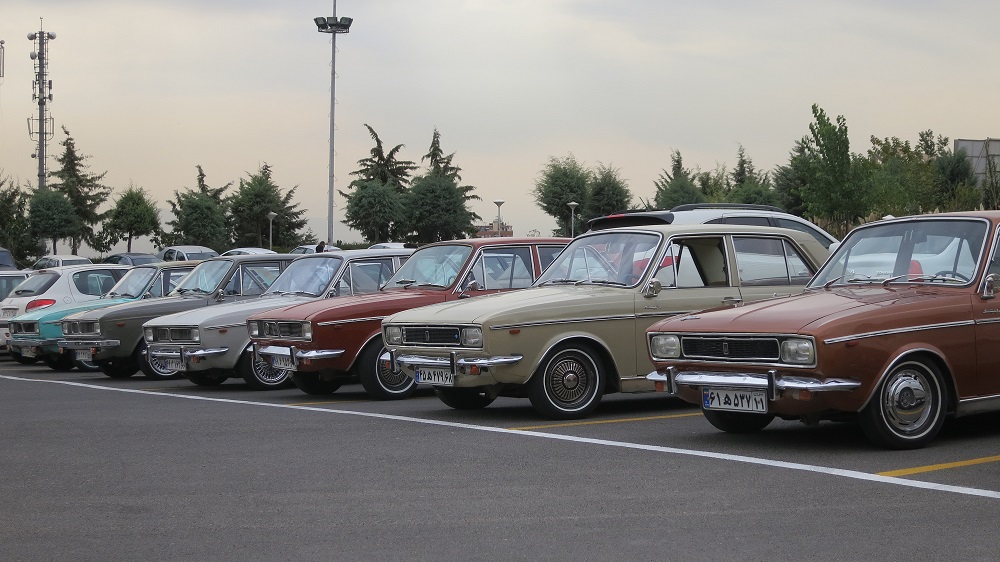 In 2003, Iran’s streets were filled with the boxy white Paykan sedans and the occasional foreign-made compact car. Cafes were rare; any public signs of wealth, subtle. Many people lived on salaries that wouldn’t pay even a month’s rent — $1,000 a month seemed like an extravagant amount of money.

By the time I left Tehran in 2007, consumerism was on the rise. International companies and luxury products were finding a market in Iran. Soon after, couples would be eating gold-flaked ice cream in tower-top restaurants and flaunting their wealth in Jaguars and Porsches. Soon, there would be a rise in evictions of long-term tenants in order to build apartment towers. Soon, all pretense of shared struggle would be gone. 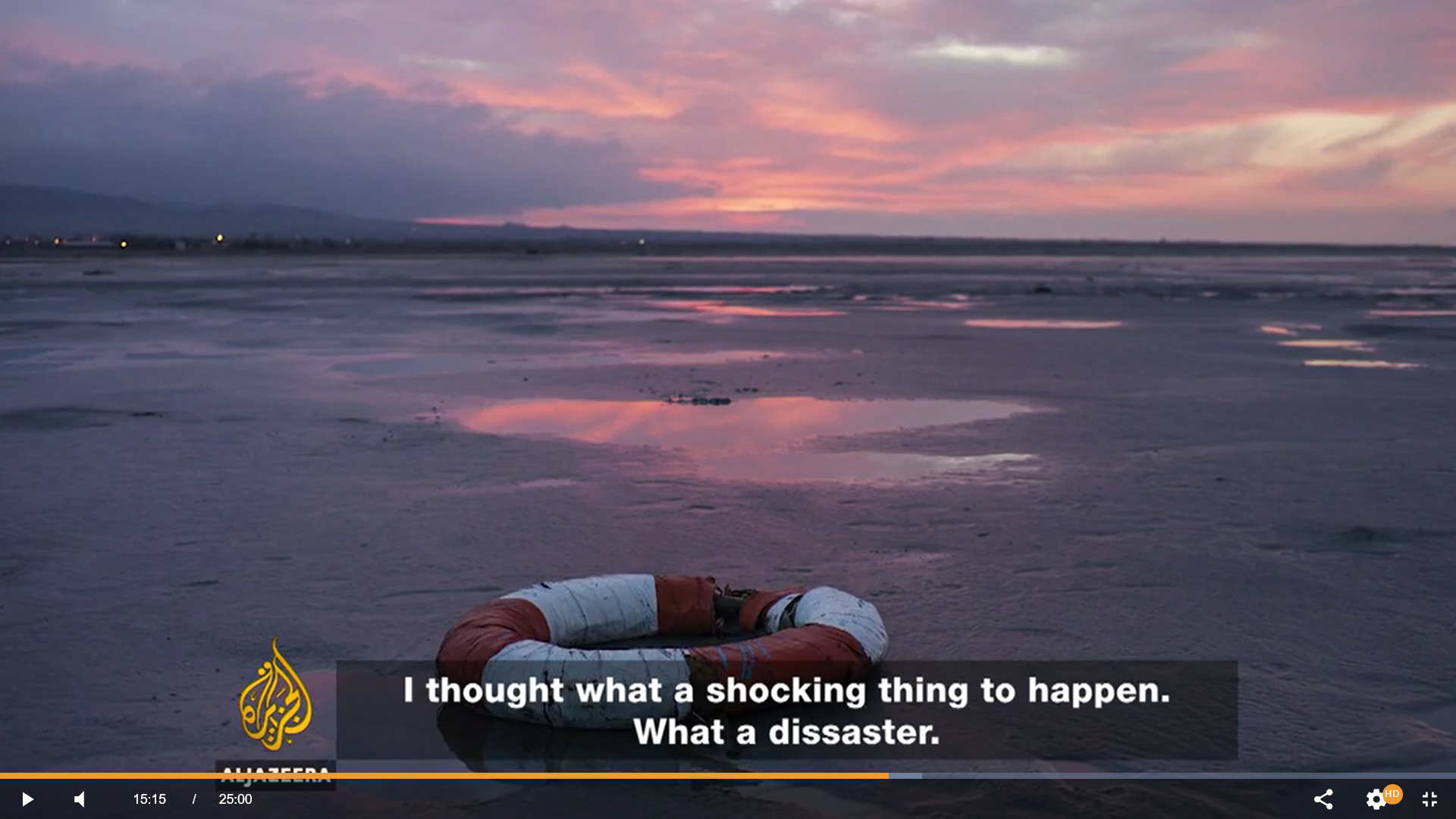 Tehran is being smothered in smog. Bad air days are increasing. People are suffering. In 2011, the Iranian government reported that nearly 3,000 people died every month because of complications resulting from pollution. That number may be higher, as research begins to show that many deaths from cardiovascular disease are actually the result of pollution, not lifestyle or diet.

Poor water management worsened during the Ahmadinejad administration from 2005 to 2013. During that time, newly constructed damns led to dry rivers, lakes, and aquifers. Once-fertile areas have been destroyed.

Private industry, with connections to the state, warned people against “exaggerating” the magnitude of the environmental crisis in Iran. An investigative report by environmental researchers found that scientific research on the crisis is often stifled.

Meanwhile, analysts predict millions of internal climate refugees. That's something to prepare for, not ignore.

Protests are growing and waning

Many people in Iran have looked at the conflict in the surrounding region and felt lucky to have been somewhat insulated from it. They feel threatened by Daesh (also known as ISIL or ISIS, the brutal militant group that has taken over areas of Iraq and Syria) and by Saudi Arabia. They are afraid of the possibility of national disintegration and the type of government violence seen in Syria. This fear has put a damper on public protest.

Iranians again show us that they are unpredictable. Those who had claimed that people were so afraid of a Syria-type scenario that they would not come to the streets, were wrong. As we say again and again, Iranians are always full of surprises. Violence and suppression won’t work forever.

This current wave of protests was apparently sparked by hardliners who initiated demonstrations in the eastern city of Mashhad against the moderate administration of Hassan Rouhani. The hardliners soon lost control, though, and people took to the streets in anger and desperation.

The Islamic Republic of Iran and the administration of President Rouhani have seen this coming. Over the past few months, there have been many protests from all sides: from teachers, bus drivers, and the working class. People all over Iran have become frustrated with Rouhani’s government. They see that the lifting of sanctions has pumped money into the country, but regular people, people who have been working very hard in Iran, have not seen the benefits.The level of corruption is high. The national budget shows money flowing into religious organizations without any accountability. The moderates and reformists have been quiet and have not taken the side of people suffering in Iran. Iranians have been quite patient with the Islamic Republic. That won’t last. This may be the last chance for non-violent change.

For the first time in decades, many people on the streets of Iran have been openly calling for an end to clerical rule. Some chanted for reinstatement of the Shah, while others have railed against the president and supreme leader.

This is in stark contrast to demonstrations in the aftermath of the 2009 elections, which was the last time masses of people took to the streets in Iran. Those protests called for a recount of the vote, for “small changes”. People sang nursery rhymes, not political slogans. One of the most chanted was:

The people of Iran have been struggling for just governance since their 1905 constitutional revolution. The country's democratic hopes have been dashed again and again. This is most notable in the case of the 1953 US- and British-led coup against Iran's democratically elected Prime Minister Mossadegh (see this Twitter essay by @_chloi for a good overview). In recent years many inside Iran have spoken of evolution, not revolution. These protesters are different though. Many feel that there is nothing left to lose.

The Iranian government is calling the protesters “counter-revolutionary.” Others are calling them revolutionary. In an unprecedented move, more than 40 students were preemptively arrested because of fears what they might do if they became involved in the protests. The Center for Human Rights in Iran has more information on this: Iranian Security Forces Have Arrested More Than 40 University Students.

History shows that protests have their own dynamics. They can grow, radicalize, and lead to revolution. But the same history shows that they can end in repression and concessions. What we know of Iranian society and government point to the second outcome.

What can civil society do?

IranWire’s Maziar Bahari suggested some changes to US policy to better support demonstrators:

Three simple suggestions for the US government and others:
1- impose sanctions on Iranian state TV, IRIB 2- lift travel ban for Iranians 3- condemn violence from all sides, both violence by the  government and those who promote violence against mosques and banks in Iran.

This is a very critical time for reformists in Iran. If they don’t find a way to support those demonstrating in the streets, they will lose all of the backing they’ve gained over the past six years. By this I mean, the seats gained by Reformists in Parliament and on city councils. Protesters are asking them for support. So far, their only response has been to tell them to calm down. If that’s the best they can do, there is no hope for them as a party.

With reports of nearly 1,000 arrested, the crackdown seems more effective than the “calm down”.  Journalist Golnaz Esfandiari reported that hardline news outlets are using Twitter to crowdsource the identification of protesters:

In a letter from prison, the vice president of the Defenders of Human Rights, Narges Mohammadi, published recommendations for supporting the demonstrations without violence. She asks that civil society put pressure on government to reevaluate the budget, and feels that this is the best way to support peaceful protests and bring about change:

Instead of talking, the government needs to take concrete steps to support and protect the rights of the people by making fundamental reforms.

In this critical situation, the members of parliament need to listen to the concerns of the people. They need to ensure that the proposed budget is not ratified.

We, the people, with determination and without violence, must stand firm in demanding our rights. The protest will be costly but it must also pay off. For now, the most urgent matter in the struggle against corruption and poverty is the 2018 budget proposal. We need to engage in peaceful protest in order to prevent its passage.

If I were not in prison, I would be in front of Parliament every day that the budget bill was under discussion. The members of parliament need to know that they are accountable to the people, that they represent the people, and that the eyes of the people are upon them.