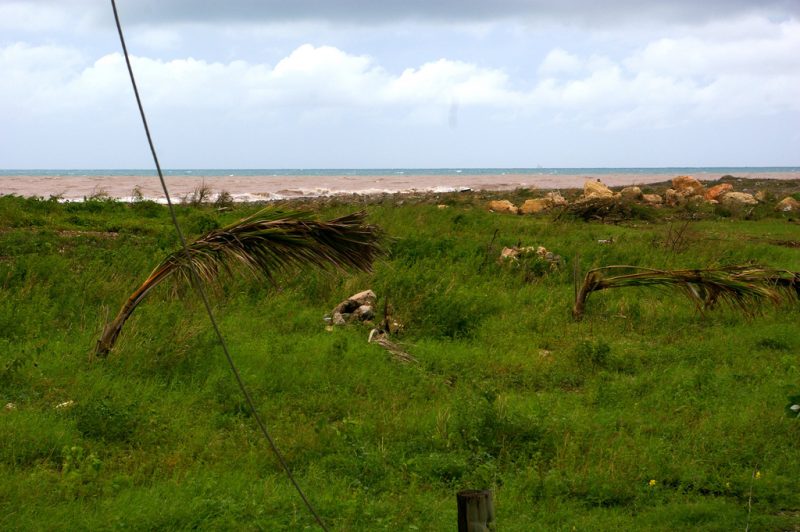 Windswept palms at the start of the Palisadoes strip in Kingston, Jamaica, the only access road to the airport. Photo by Christina Xu, CC BY-SA 2.0.

Fun is one thing; disruption is another. When the only route to Jamaica's international airport in Kingston, the capital, was blocked for several hours on New Year's evening because of the traffic caused by a party, many citizens were hopping mad, and one government minister in particular, thoroughly embarrassed.

The incident raised several issues surrounding the operations of the Jamaica Constabulary Force (JCF), including its current wage claim and pay issues. There has been an apparent stalemate in negotiations between the police force and the government, and several officers staged a “sickout” from mid-December right through to the Christmas/New Year holiday.

The debacle also called into question the JCF's competence in traffic management and crowd control, as well as its ability to enforce the country's laws. Police Commissioner George Quallo is currently sitting uncomfortably in the hot seat, after just nine months in office.

On the evening of January 1, 2018, there was a heavy buildup of traffic along the narrow Palisadoes strip — the only route linking the city of Kingston to the Norman Manley International Airport. However, as the popular annual dance party Sandz got underway at a beach location on the strip, an extraordinary situation developed.

Vehicles and party patrons themselves blocked the road, creating traffic chaos and preventing drivers — including visitors to the island trying to catch a plane home after their holiday — from reaching the airport. This was not a temporary problem that was quickly resolved: the road was blocked for six hours. Some travellers walked the considerable distance to the airport, while others chartered motorbike riders to transport them and their baggage.

One Jamaican on his way back to Florida tweeted:

Just did my first 5k on the palisadoes strip…with my laptop bag, carry-on & checked bag in tow. At least I made my flight. Thanks #Sandz ?

It is easy enough for me to look back at this and laugh (It would be a lot less funny, if I had missed my flight).

But if somebody in Port Royal had a medical emergency last night they would have probably died, and that's no joke. We need to do better.

The blocked road was visible from afar:

Palisados road from my house in red hills.
All those lights are cars. pic.twitter.com/zi5HbZaGmf

Jamaicans largely reacted with astonishment, disgust, a barrage of questions and, in some cases, a heavy dose of cynicism:

Billions of dollars spent to upgrade the Palisadoes road to prevent the airport becoming inaccessible due to a hurricane. But what a hurricane now can't do, poor governance can. #Sandz https://t.co/A7UwOFdWw6

#Sandz is a microcosm of what’s wrong with Jamaica at the moment. There is no plan, parking or otherwise, that can withstand the impact of collective indiscipline that is tolerated and allowed to escalate.

On Facebook, the disapproval was widespread. Terri-Ann Guyah was livid:

I am here at the airport from 8:45 pm after my flight has been delayed for over 4 hours in FL…only to see this! […] customs officers say it was worse last year..so how do they grant a permit for a party that has caused this problem before? How is it that there is no police directing traffic or parking patrons of the party?? Are we so corrupt and irresponsible that we can allow government to lose revenue because of a party?? Is this what we have come to??

In response to the incident, Minister of National Security Robert Montague demanded a report from the police commissioner almost immediately — and then rejected it as inadequate:

UPDATE: Security Minister #BobbyMontague has issued a stinging public rebuke of report submitted to him by Police Commissioner @GeorgeQuallo about incident which disrupted activity at Jamaica premier international report. Montague says he has rejected the “disappointing” report. pic.twitter.com/ViDwW2y51k

Meanwhile, Commissioner Quallo issued an apology to the general public the following day.

Some gave the police commissioner the benefit of the doubt, but many were far less charitable. Besides accountability, the general issue of enforcement was a major concern. Economist and university lecturer, Dr. Damien King, aptly illustrated the enforcement issue:

Police Commissioner @GeorgeQuallo told @Nationwideradio radio this morning that we need signage to prevent another Palisadoes traffic blockade. Here's what we think of signage without ENFORCEMENT, Mr Commissioner. pic.twitter.com/DrN0XIKL4W

Commissioner Quallo requested more time from the minister to submit a more detailed report, which is now due on January 5, 2018. In a second statement, Minister Montague appeared to be holding the high command of the police force accountable, rather than the rank and file, who are currently seeking a substantial wage increase.

The desired wage increase became even more relevant when Commissioner Quallo confirmed in a radio interview that an unnamed policeman attached to the Major Investigation Division (MID) was one of the promoters of the event. Although this revelation raised eyebrows, it did not come as a great surprise to many Jamaicans, since it is well known that police officers often “moonlight” and have other businesses on the side, including operating taxis and buses, and providing security services.

‘Without problem analysis, we will come up with the wrong solution’

One Jamaican blogger hinted at corruption as a hidden factor:

Sandz single-handedly held our country hostage…the security of our airport at seige, delaying flights, people frantically trying not to miss flights to subsequently become a nationally debated issue, as all involved [point] fingers […], only publicly avoiding the real issue of who had the most to gain.

Entertainment events are perhaps the most policed and regulated social activity, strangling the life out of an otherwise potentially striving economy, and one which we (Jamaica) have significant and under-explored foreign income generating possibilities that could touch literally all different types of local economies.

Corruption is real, and available at all levels if doing things the right way is made particularly and unnecessarily difficult and pervious to ‘spirit-tek’, where sabotage and manipulation is easy due to archaic systems and methodologies.

Trying to find a balance between Jamaicans enjoying themselves and following rules and regulations can be tricky. Junior minister Damion Crawford announced two years ago that the Palisadoes strip would become an “entertainment zone” in an attempt to find such a balance, and to minimise disruption while supporting music events. In October 2017, Culture Minister Olivia “Babsy” Grange announced the first entertainment zone — an old fort in a fairly isolated spot outside Kingston.

However, this latest fiasco has cast something of a shadow over the government's efforts. Did the police simply let everyone down, or were there more complex factors involved?

It's the why of the situation that must be explored, even if it's not customary in Jamaica to do so, civil society advocate and environmentalist Diana McCaulay argued:

There will be calls for an inquiry. For accountability. Blame will be shifted and avoided. Promises and commitments will be made. Then – rinse and repeat.

There is one step, however, that we rarely take – and that is problem analysis. Questioning the ‘WHY?’. Why did the Police give a permit for an event at Seventh Harbour for a second year, despite problems last year and according to one source, a decision taken by the Police High Command not to grant such permits? Was this poor communication? Poor record keeping? Short memories? A decision taken at a high level to overrule this sensible decision? Because a policeman was reportedly one of the promoters? Answering the ‘why’ takes us to targeted fixes.

Without problem analysis, we will come up with the wrong solution, time and time again.

While many more questions remain to be answered, Jamaican netizens hope that their police commissioner can provide a clear explanation of what went wrong — and that such a calamity will never be repeated. This has been a surprising and unexpectedly shaky start to the New Year.