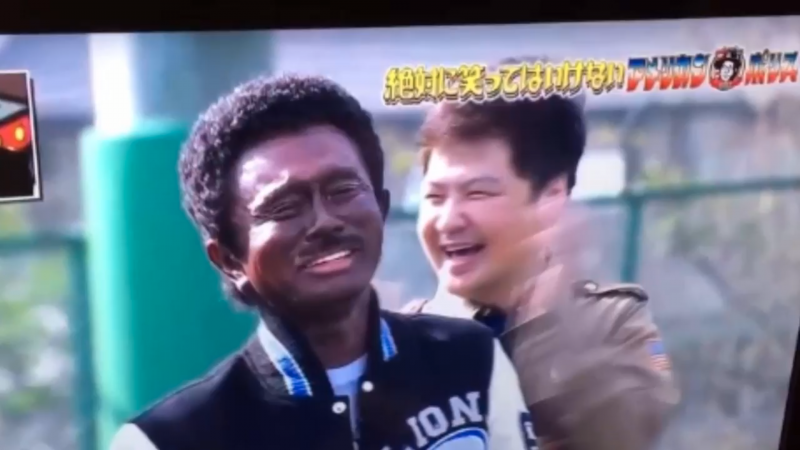 A popular comedy television program traditionally watched on New Year’s Eve in Japan has generated controversy after one of the program hosts, an iconic comedian, appeared in blackface.

The show, whose title roughly translates as “Definitely No Laughing: American Police 24 Hours” (絶対に笑ってはいけないアメリカンポリス24時), is a spin-off of a long-running comedy variety series in Japan called “Downtown no Gaki no Tsukai ya Arahende!!”, commonly abbreviated as GakiTsuka.

“Definitely No Laughing” is the second-most watched New Year’s Eve program in Japan, with the percentage of households tuning in for this year's show at 17.3 percent. It has consistently aired in this time slot since 2006, making it a New Year’s Eve classic alongside public broadcaster NHK’s singing competition called “Kohaku Utagassen“.

The show's premise consists of five comedians who try to survive 24 hours without laughing, or else face various penalties and “punishments“. Multiple guests, including famous actors and TV personalities, attempt to make the five comedians laugh by engaging in short, often sophomoric gags (not unlike those that feature on the American MTV show “Jackass”, but with a cast that includes former news anchors and fashion models).

Ten minutes into this year's show, the five main comedians were told to change into an assigned costume to wear throughout the whole program. Four of the comedians donned a stereotypical American sheriff costume, in line with the 2017 program's theme of “American Police”.

The remaining comedian, Hamada Masatoshi, a co-host of the show and a superstar in Japan, emerged from the changing room with his face painted dark brown and his hair in a short Afro style. The intent was to imitate American actor Eddie Murphy’s character in the 1984 film “Beverly Hills Cop”, complete with an identical jacket and facial hair.

Despite the racist implications, Hamada's blackface makeup was met with raucous laughter by the other comedians.

Blackface has a long history in Japan's entertainment world

Blackface originated in the minstrel shows of 19th century America. White actors would paint their faces black for comic enactments of black stereotypes, such as the “happy-go-lucky darky on the plantation”. Such performances contributed significantly to the proliferation of racist images and perceptions of blacks in the US, and the practice only died out during the Civil Rights Movement in the mid 20th century.

Minstrel shows in Japan date back to the very beginnings of Japan's relationship with the United States, and were first introduced to the country during a visit by the American Commodore Matthew Perry in 1854. The practice of using blackface in comedy has persisted in Japan since then.

Japanese TV is really out here putting people in blackface as a joke. What year are we in again? https://t.co/Ev91ETWA19

Is Japan the only country that doesn’t know that Black Face is UNACCEPTABLE and RACIST #racism pic.twitter.com/zoSXded3N0

Racism in #Japan. A Japanese famous comedian in blackface and it's air on the TV program. This is DISGUSTING.#ガキ使#Blackface#Racism pic.twitter.com/0Y76y70Stn

Japan-based American journalist Baye McNeil, who frequently writes about the experience of being black in Japan, took to Twitter to tried to explain why blackface could be considered offensive and should not be part of any comedy routine:

Note to japanese performing in #BlackFace: #Blackness is not a punchline nor a prop. Need jokes? Get better writers. Need a black character, get a black actor that speaks Japanese. There are several! But please #StopBlackfaceJapan #日本でブラックフエイス止めて not a good look! pic.twitter.com/lN0E3bWsgY

When he attempted to use Facebook to translate the above tweet into Japanese using a Facebook translation tool, McNeil discovered another problem: Facebook's English translation for the Japanese word for “black person” ( 黒人, kokujin) resulted in a deeply discriminatory epithet:

Not sure if this is a “bing” issue or a facebook issue but I’m pretty sure (at least I hope…Japan’s recent #blackface issues notwithstanding) the translation of 黒人 is not this!! pic.twitter.com/F9SVkFpe8a

Japanese Twitter users seem to see blackface as a joke

Unfortunately, a majority of Twitter users voiced no displeasure at the use of blackface as a joke. Rather, it was lauded by some as one of the best gags in the whole show.

Hamada’s face by itself eclipses the other skits

Several Twitter users even started to mock or criticize those calling out the gag as racist, with some framing the issue as politically-correct leftists running amok.

#GakiTsuka Hamada’s dress-up as being racist against blacks didn’t show up when I searched it yesterday, so I thought that it might not be commented on, but it came up as expected today. It isn’t correct just because it’s “Western common sense”. I think that it is better to draw the line depending on the nature of the gag rather than categorizing what act is good and bad.

Calling everything an issue of discrimination is in itself discrimination…
We’re laughing at the character of the dressed-up comedian Hamada, not that he is black
#GakiTsuka

The Japanese television industry had a similar controversy regarding blackface only two years ago, when the popular idol group Momoiro Clover Z put on blackface and dressed up as minstrel show performers for a TV show.

However, there is more and more it was only three months ago when discriminatory depictions of gay men in a televised comedy skit sparked a nationwide discussion on political correctness in comedy. Twitter users were quick to draw similarities between the two incidents and the Gakitsuka blackface.

Regarding this case, it feels like we’ve gone through this discussion already with Momoiro Clover→Momoiro Clover Blackface Problem, before the Music Fair broadcast

Along with the Homooda Homoo incident (discriminatory depictions of gay men), the anachronism is excessive.

A lack of awareness in Japan?

While some Japanese Twitter users complained about comedian Hamada's appearance in blackface, the backlash against actually calling out the blackface as racist seemed to be overwhelming in comparison.

One Twitter user suggested that no harm was intended by the skit, and the real problem is Japanese people still do not understand that blackface is wrong:

I’m embarrassed for my lack of awareness, but it seems that it’s not an issue of whether Mr. Hamada is discriminating blacks but the fact that blackface in itself racist is a global norm.

The issue lies in the production side’s lack of awareness, as well as the low awareness of the Japanese including myself.