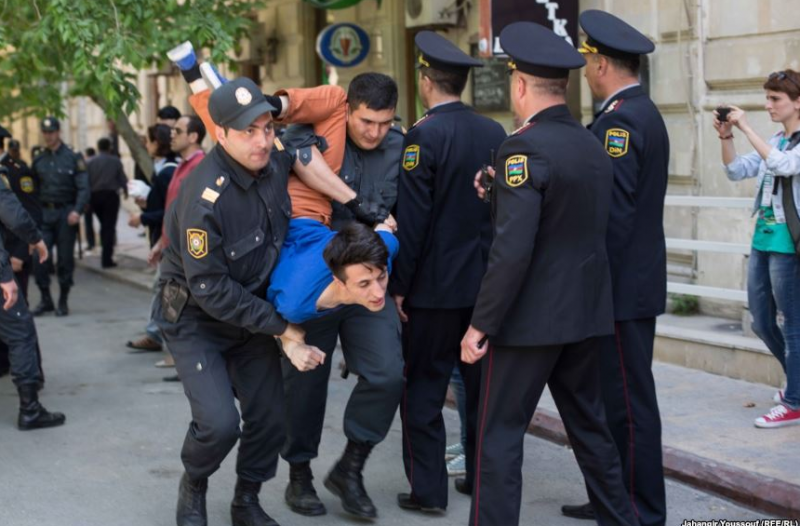 At a meeting of NATO allies in Brussels in November 2017, Azerbaijani President Ilham Aliyev highlighted the importance of free speech and internet freedom.

A summary published on the official presidential website [1] paraphrased Aliyev's remarks as follows:

This and other similar assertions have elicited raised eyebrows from many Azerbaijani journalists. Aliyev's words are a far cry from his actions over the past five years.

Between 2013 and 2015, a cascade of regulatory changes [2] and arbitrary legal threats put Azerbaijan's once-vibrant civil society of journalists, activists, and youth organizations in the line of fire. Many were arrested [3], on bogus charges. Others left [4] the country, out of fear of persecution.

As a result, much of the remaining conversation around democracy, rights and freedoms shifted to the online world. But each year, it becomes ever-more clear that there is not much tolerance for online dissent either.

The latest example came on December 1, 2017, when parliamentarians introduced and adopted a new set of amendments that will hold individuals, officials and legal entities responsible — and subject them to fines — for online dissemination of “banned” information.

If an internet information resource is entered into the List of Information Resources that Have Posted Information Banned from Distribution, it should immediately restrict access to any such information that it contains. Otherwise, the host and internet providers will face fines in the amounts of 1,500-2,000 AZN for officials and 2,000-2,500 AZN for legal entities.

Officials have not indicated how websites that support reader comments or user posts (such as Facebook or YouTube) will comply with these rules, if and when their users post content that falls under the ban

The ban covers a class of content known as “prohibited information,” which was established by a May 2017 court order authorizing the government to censor websites with specific types of content.

As per the court order, “prohibited information” can include the following categories:

The public prosecutor's office claimed online resources were blocked for posing a threat — but when we took a closer look [5] at the content shared on these websites, we found that they did not match the criteria for “prohibited information.”

Several of the websites that were blocked primarily featured stories on government corruption, rising suicide rates in Azerbaijan, poor economic and social living conditions, and independent news coverage of local protests. Three news websites and two satellite TV channels were swiftly blocked inside the country. And since then, more than a dozen online resources providing independent news and information have been blocked.

All this begs the question: For whom is this “prohibited information” most threatening?

Indeed, these legal reforms threaten everyone but the ruling elite of Azerbaijan. This is a classic trait of Aliyev's regime. In the years since he took the presidential throne from his father, Ilham Aliyev has only made the lives of his countrymen more miserable.

It seems that legal reforms in Azerbaijan are never proposed purely out of the goodwill of Azerbaijani parliament members. Although their primary purpose is to serve the public, we as Azerbaijani citizens do not even know for sure whether they were legitimately elected [6] to public office.

And so it was not surprising to see the second wave of legal amendments that were introduced and approved by the Azerbaijani parliament with the end of 2017 approaching. The lawmakers approved amendments to Azerbaijan's Code of Administrative Offenses, introducing high monetary penalties against owners of the internet information resources or domains for distributing prohibited information (deemed so by the authorities) or failing to prevent dissemination of such information.  December 15, Azerbaijan's National Parliament approved amendments to the bill on armed forces, prohibiting journalists from seeking certain types of information about military activity.

Organizations and platforms that have been held back by this recent wave of regulatory measures are now increasingly reliant on their Facebook pages and YouTube accounts to keep their voices present online. Many have built mirror websites where they continue covering critical stories and news from Azerbaijan.

Azadliq Radio, the Azerbaijani service for Radio Free Europe/Radio Liberty updates its readers [7] and viewers at the end of their daily news wrap up, providing an updated URL for their platform. Meydan TV relies on a mobile app.

Describing the fall of free Internet in Azerbaijan, civic activist Ali Novruzov wrote [8] on his blog:

What made the matter worse was that our even hypothetical Internet freedom was not guaranteed in the law books. Loose provisions of the laws were leading to occasional blocking of websites. Aside from some satirical blogs and Iranian-sponsored religious propaganda websites, even Imgur, an innocent photo-sharing platform fell a victim for a short time. However, blocking of websites was an exceptional measure back then. Despite being an arbitrary measure, the government was resorting to it only in selected circumstances.
[…]
With oil prices plummeting and economic situation getting worse on daily basis, it was evident that the government was no longer inclined to tolerate any dissent whether it was online or offline. The days of the hypothetical free Internet were also numbered.
[…]
While curbing basic rights and freedoms, going after activists, are a rule of thumb when it comes to persecution of active members of Azerbaijan's civil society, polishing of existing laws seem to have made things far easier for the ruling government especially when it needs to answer in front of the international rights watchdogs and institutions. First it is none of their business leaders like to say, even when a pinch of criticism is steered their way, and secondly, we have laws, according to which the authorities lawfully abide by.

These recent legal amendments, as well as the on-going show of power between authorities and Azerbaijan's crippled civil society, indicate that President Ilham Aliyev's talking points about free expression and the internet are just words. In Azerbaijan, free and open the internet is not.