The People of Iran Are Raising Their Voices: Scenes from the Protests 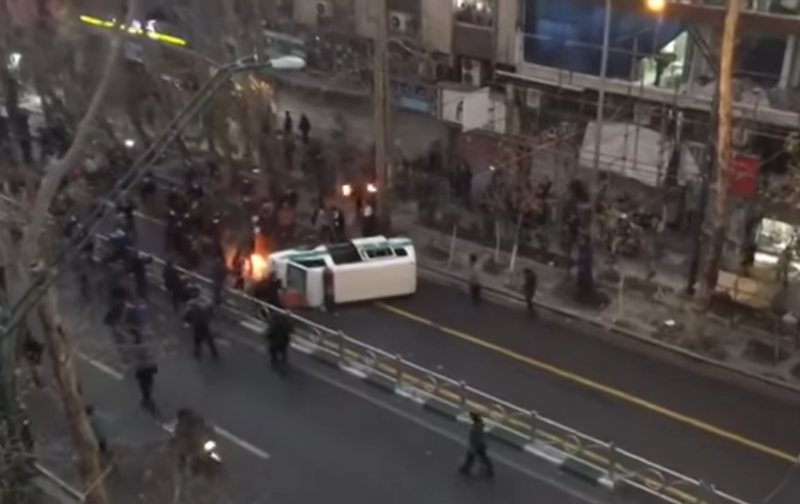 Protesters overturn a police vehicle on Tehran's Valiasr street. [Photo taken from amateur video filmed in Iran and shared by Voice of America]

The last century has witnessed countless examples of the struggle and sacrifice of ordinary Iranian people, fighting for everything from the nationalization of the oil industry to women's suffrage, to overthrowing a monarchy. Yet at each turn these heroic struggles have been suppressed, co-opted, or re-branded to suit a particular discourse or narrative. A simple example is the amazing diversity of secular, radical, and feminist forces involved in the 1979 revolution in Iran, who have nevertheless been obscured by the enduring image of this event as a seizure of control by reactionary mullahs.

There are many complexities underlying the new wave of protests currently taking place in the country, which are being framed simplistically by some so-called “Iran experts” as an instance of the actions and passion of ordinary citizens being used to serve specific political interests and ends. This includes the growing frustration with corruption and entrenchment of the Islamic Revolutionary Guards Corps (IRGC), the branch of the Iranian armed forces formed after the 1979 revolution, in the economy. It is also important to understand the political infighting plaguing the regime, as well as the long-standing pressures and contradictions that have resulted in this outburst.

Yet the reality of Iran is right before us in its purest form, in need of no explanation by talking heads. These protests are about freedom, opportunity and democracy—ideals both universal and self-explanatory.

In order to let the people of Iran speak for themselves, I have attempted to highlight a few poignant images, slogans and actions that offer a glimpse into what is happening in Iran right now. I leave it up to readers to draw their own conclusions.

Why People are Protesting

In the video below, a young woman narrates the scene at Tehran University as the IRGC and security forces arrive at the campus, noting that many students have been beaten and some been arrested and taken away. Despite the physical assaults, she notes that “…the students have remained standing and are continuing to shout their slogans.”

In another video from Tehran (see below), protesters chant “death to dictators” while fighting off tear gas.

In the video below, a man in Behshar films as he comments on the treatment of Iranian citizens by police. The man narrates the brutal arrest and tasing of what appears to be an unarmed protester. “Look at what they do to people in this society. Look, look. They shocked him over nothing.” As he continues filming, people in the crowd begins to shout “let him go”, while others begin to walk towards the police. The video ends with the man saying, “it’s now come down to ordinary people having to fight back.”

Below, a large crowd gathers in Shiraz chanting for fellow citizens to join their protest.

It is interesting to note that while some have claimed that protests in Iran are part of a movement for reform headed by the so-called moderate President Hassan Rouhani, the current protests appear to have transcended factional infighting. In this video from Hamadan, protesters are heard chanting, “clergyman have some shame, free our society”, followed by “Death to Rouhani!”, indicating a disdain for the clergy and the Islamic republic as a whole.

The clip below shows a man throwing stones at security forces in Ahvaz while chanting “Death to Khamanei!”—words that could carry a death sentence in Iran.

The video below from Mashad show fires burning, and screams from the crowd seem to indicate a clash with security forces.

In Lorestan, protesters are seen dragging a bloodied body through a crowd while chanting “I will kill he who killed my brother” and “Death to Khamanei!”

In a film attributed to Bandar Abbas, protesters set fire to a billboard with the image of the Supreme Leader Khamanei. An act of rage and defiance that goes beyond the price of eggs or the desire for political reform.

In the video below from Mashhad, a police vehicle appears to have been flipped over and set on fire by protesters.

While in Zanjan, protesters surround fleeing security forces and pelt them with objects as they attempt to escape.

In Kermanshah, a group of security forces are seen fleeing a large crowd of angry protesters.

A microcosm of Iranian society features in this videotaken from a taxicab reportedly in Tehran. On the driver passengers witness security forces beating protesters, with a female passenger remarking that people are unhappy and shouting to ask the security forces why they are beating the protesters. The driver, apparently perturbed by her tone, tells her to let it go and  to stop talking or he will kick her out of the car. The female passenger, ever defiant, demands to be let off. As the driver lets her out he grumbles about not wanting his car to be damaged, as we witness more confrontations through the taxi's windshield.

It is clear that in this struggle there are those who are no longer willing to stand by and witness injustice quietly. We should listen to their words and take their actions for what they are—the brave defiance of a country ready for change.