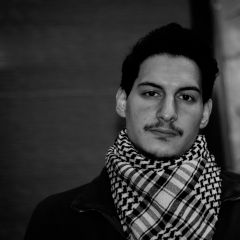 Qasem Al-Hallak was shocked when, at the age of 13, a doctor revealed that a little wart in his neck contained cancer cells.

“I thought it [was] only an inflammation,” he told Global Voices.

Al-Hallak resides in Hazrama, Syria, a town in the opposition-held territory of Eastern Ghouta, about 10 kilometers from Damascus, where nearly 350,000 inhabitants have been besieged by government forces for the last four years.

Al-Hallak is not the only one in this area who has to endure cancer.

Dr. Wisam Muhammed, 35, a cancer specialist and the manager of Rahmah Center for Curing Cancer, the only center specialized in tumors’ treatment in Eastern Ghouta, told Global Voices that their patients deserve treatment as Syrian citizens but because they were born in Ghouta, the siege prevents them from receiving adequate care.

Overall, 80% of Dr. Muhammed patients are children and women—people who are largely ignored in Syria’s war and political disputes.

“They are victims of the Syrian crisis and of their illness,” Dr. Muhammed said.

Rahmeh Center for Curing Cancer was established in 2013. Dr. Muhammed said that they keep an eye on previously diagnosed patients in addition to studying new cases and providing medical analysis for chemical curing processes. They have 1,228 patients, 665 of whom receive some form of treatment despite a lack of medication.

It’s the biggest disaster we face, and 60 of those who are being treated must be evacuated now. We can save the others if medications allowed to get inside.

Nowadays, the center is the last resort because there are no alternative solutions. A patient who needs a chemical dose may not be able to receive it, and the center takes in patients from all the cities of Eastern Ghouta.

In 2014, the Syrian Arab Red Crescent, a humanitarian organization based in Damascus, evacuated some patients through the Wafedeen crossing, a military checkpoint where aid, goods, and food passed through, and the only current entry point into and out of Eastern Ghouta.

They were sent to special hospitals in Damascus, where the chances of curing them are higher.

Many others also evacuated from tunnels before the government discovered them. Opposition forces started digging tunnels in 2015 to smuggle in food, goods, medication and other necessities.

There were three main tunnels connecting Eastern Ghouta with the Eastern neighborhoods of Damascus such as Barzeh, Qaboon and Teshreen during the truce with the government that lasted until May of 2016, when the truce broke. After that, government forces attacked the neighborhoods and took control over them, leading rebels to close the tunnels by blowing them up.

Eastern Ghouta has been besieged by Syrian government forces since the middle of October of 2013. There are three main opposition forces located in Eastern Ghouta: Jay Al-Islam, which controls the north of the territory, while Faylaq Al-Rahman and Ahrar-Al Sham control both the middle and southern parts. 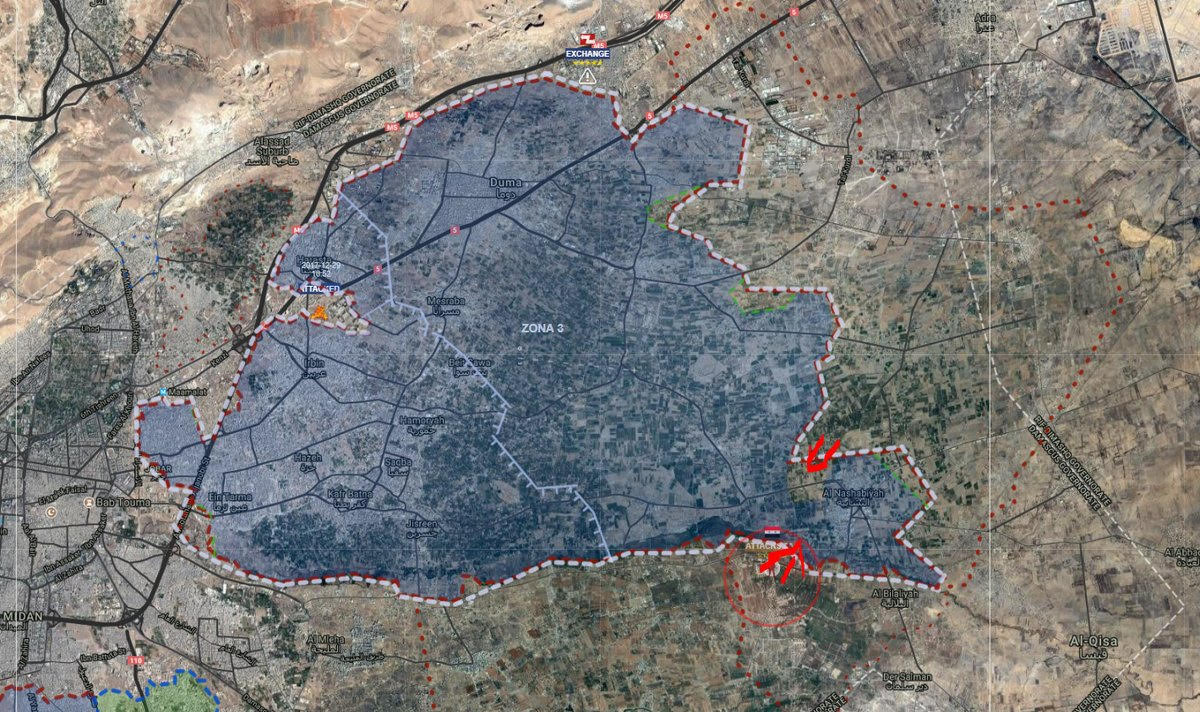 Map of Eastern Ghouta dating to four days ago. Provided by the author.

Since the beginning of the center’s work, 325 of 665 patients have been cured while 130 have died. The last 27 death cases are a result of the siege, the according to the center. Thirteen have run out of medicine, 41 others are monitored and 54 more patients are being studied in the center.

“We make medical analysis and give medication to patients free of charge,” said Dr. Muhammed, who added that medication needs to be carefully distributed due to low supplies.

[At] the [beginning] of 2017, the siege [tightened] … so the huge number of patients leads to drain treatment and [a shortage] of many medications. Now what we have in our hands serves only 3% of patients.

Al-Hallak registered three years ago in Rahmeh Center, which is about 7 kilometers from his home. His skin has been darkened by the many hours of walking under the sun with his father and the distance is just one of many difficulties he faces.

Every week he commutes to the center by foot with his father for chemical treatment and medication to avoid high prices of transportation for chemical treatment and medication. Since he started taking chemical medication, his body has weakened, and due to the food shortage brought on by the siege, he feels it is impossible to gain the strength back. He takes chemical doses every 15 days along with a daily painkiller and anti-inflammatory medicine.

Muhammed Al-Hallak, Al-Hallak's father, a 43-year-old worker in free trade, thought he was going to lose his son by “the no-treatment disease,” as he describes it. Muhammed Al-Hallak and his wife agreed at first not to tell their son too many details about his illness to protect his feelings. Later on, however, they couldn’t hide it anymore and had to kindly tell him about it, choosing to deal with it as the ‘common flu’ to avoid fear.

The main problem that makes difficulties is the siege.

Now 15, Al-Hallak's cancer-ridden body doesn't resemble his age due to the disease and treatment. A lack of medication continues to create health problems for him. His father is currently out of work and has six sons to support. A single packet of anti-inflammation medicine can cost 1,500 Syrian pounds ($3 USD).

Due to the dire conditions in Eastern Ghouta, Muhammed hopes to receive more financial support from the only center in the region that specializes in curing many cases like his son's.

Yaser Al-Shami, the administrative officer of Damascus Countryside Specialist Hospital, the only centre in the region that specializes in curing cases like Qasem’s, stated that his center is unable to pursue all levels of treatment, and post-surgery and radial therapy materials do not exist at all.

Al-Shami demanded the government open crossings for patients from Eastern Ghouta and apply all the terms of the de-escalation agreement established on September 15, 2017 between Turkey, Russia, and Iran in the sixth round of the ‘Astana Peace Talks’ for Syria. The agreement also calls for a reduction in violence in Syria and opening trade crossings. Al-Shami said that honoring the agreement can save those suffering in Ghouta.

“There [used to be an] ability to treat cancer cases by chemical doses and other required materials, but nowadays, there is not much medicine, so the circumstances are not suitable for the patients at all. They could be helped by [receiving] medication in Eastern Ghouta, in addition to having humanitarian crossings open for food and evacuations.