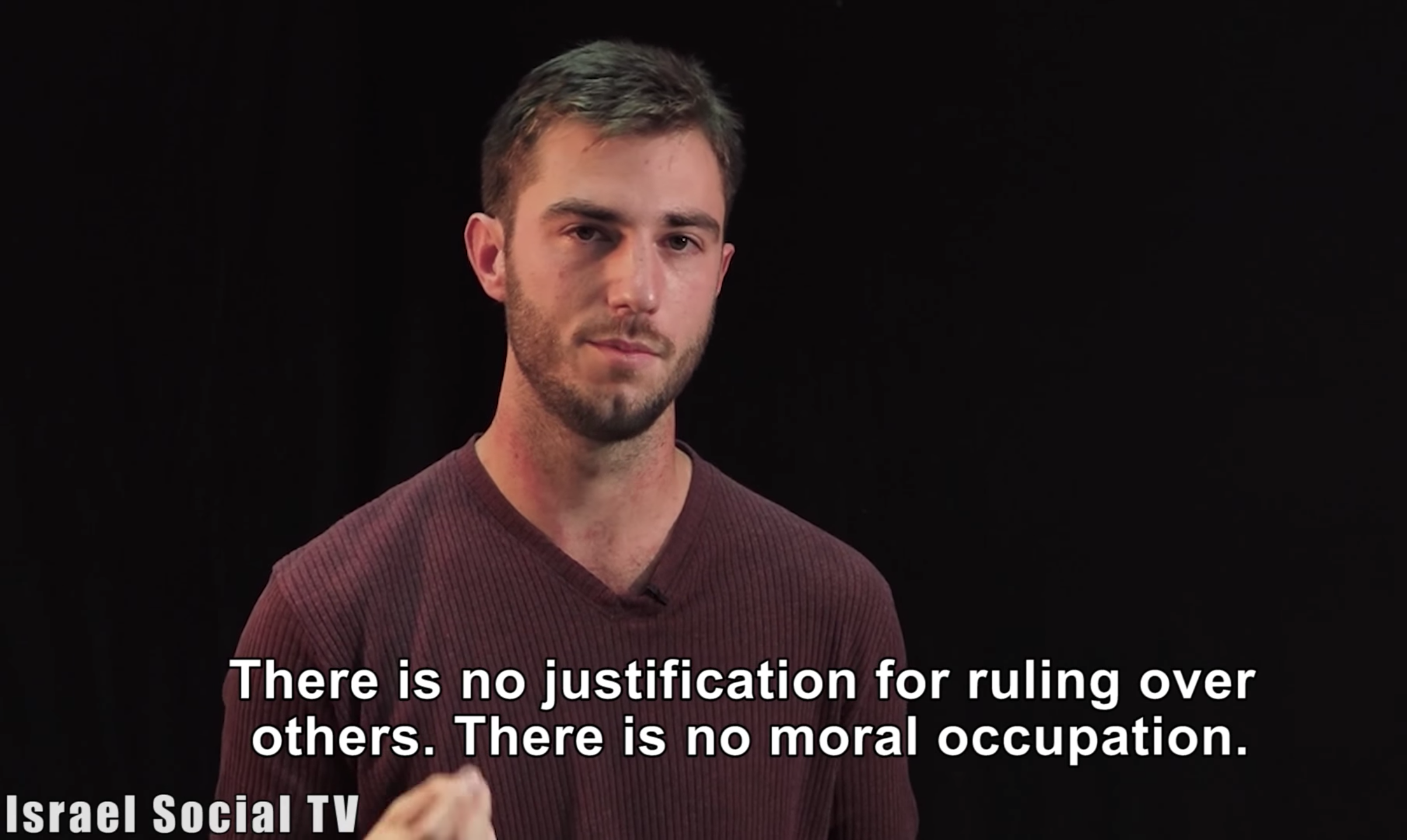 “There is no justification for ruling over others. There is no moral occupation.” Mattan Helman in a screenshot from “Morality and Conscience Face Every Law” published on YouTube by SocialTV.

Mattan Helman, 20 years old, refuses to serve in the Israeli military, even though doing so means he is breaking the country's law.

Helman is an activist from HaOgen in central Israel, approximately 26 kilometers north-west of Tel Aviv. He was assigned to the Nahal Brigrade, one of the Israel Defence Forces’ (IDF) main infantries operating in the occupied Palestinian territories, but believes joining up would legitimise Israel's “immoral” control over the West Bank (including East Jerusalem) and Gaza.

At the time of writing, Helman was serving his second sentence, of 20 days, in Military Prison 6, since the 18 of December, 2017.

Helman spoke about his decision in a recent interview with the Israeli activist group SocialTV, which was shared by other well-known groups such as Jewish Voice for Peace.

Israel took over the territories during the 1967 Israeli-Arab war, referred to in Arabic as ‘النكسة’ (An-Naksah, “the setback”), and 50 years later continues to not only occupy them, but expand its claims on the land — to the condemnation of the international community.

In 2004, for example, the International Court of Justice (ICJ), the United Nations’ primary judicial branch, ruled that a wall built by Israel in and around the West Bank was illegal as it crossed Palestinian territory, warning that the wall “could become tantamount to an annexation of Palestinian land, and impeded the Palestinian right to self-rule”.

The following is a graphic entitled “Palestine Shrinking, Expanding Israel” by the data visualization group Visualizing Palestine showing “the military, legal and financial tools that have been utilised in the gradual transformation of historic Palestine into ‘Greater’ Israel, mapping the extent of the territory now defined as Israeli ‘state land’, on which Palestinians — even those holding Israeli citizenship — are now largely excluded from living.”

In the interview, Helman said he knew he would be jailed for his decision, but was willing to accept it:

I know that refusal is breaking the law, but opposite to every law is morality, conscience and limitations.

There has been much social injustice in the past that was legal. The holocaust in Europe, apartheid in South Africa and slavery in the United States were all cases of legal injustice.

Conscientious objection to military draft is recognised under international law. As the Quacker United Nations office explained in a January 2015 report:

Both the Human Rights Committee and the UN Human Rights Council have recognised the right of conscientious objection to military service as part of the right to freedom of thought, conscience and religion enshrined in Article 18 of both the Universal Declaration on Human Rights and the International Covenant on Civil and Political Rights.

However, those who conscientiously object to serving in the military in Israel risk prison.

Helman said he made his decision a long time ago. In the ninth grade he researched the topic, and asked himself three questions:

What are we doing there, what does it do to our society, and how does it affect me?

When he told his parents, he explained, they initially took it very hard but ended up understanding and supporting him.

Helman argued that “a law requiring enlistment in an army that oppresses an entire people is not a moral law and I do not feel compelled to obey it.”

While he does not oppose the need for an army, he says that it “should be used solely for defense” and “an army that occupies an entire people group is not defense. Occupation is not defense.”

Finally, as for why Helman didn't join the army and try to change policies from within, he explained that it was impossible:

True there are those who are in the army that disagree with the policy of occupation, but they still contribute to it and are part of it.

Helman's choice found some support among Israelis. When he went to the recruiting office and declared his refusal to enlist, a number of Israeli activists stood by him, blindfolded, holding signs that say “Stop closing your eyes to the crimes of the occupation”.

At the protest, one activist, Omri Baranes, said:

From minute to minute, I understand how resisting the draft and going to prison is important and relevant today. We live in a fascist and racist state, full of incitement. Although we are a little group, we are strong.

Baranes was herself imprisoned at the age of 18 for refusing to serve in the IDF, along with Tair Kaminer, several times. As of June 2016, Kaminer Tair Kaminer had served 170 days in military prison when her fifth term ended, before receiving a sixth sentence.

They are not the only conscientious objectors to refuse to join the army. In 2003, there was an estimated 1,100 IDF soldiers “declaring they will not serve in Israel's occupied territories”.

The first “Refuseniks”, as they are called, seem to have appeared in 1982, in response to Israel's invasion of Lebanon. At the time, 168 people refused to serve as they felt, in the words of Israeli group Yesh Gvul, that the invasion was “an act of naked and futile aggression.”

In its list of 2017 Refuseniks, Israel Social TV mentioned what's called the ‘seniors letter 2017′, signed by over 60 draft refusers in a video featuring interviews with some of them.

To give two more examples, among many:

In 2016 Tamar Alon, 18, and Tamar Ze’evi, 19, were arrested and imprisoned by army authorities because they didn’t accept to serve in the occupied territories. Alon said:

I believe that the ways of war, violence and oppression will not allow us to maintain a democratic state and be a free people in our land.

Atalya Ben-Abba, a 19 year-old from Jerusalem, made the decision listing her “objection to serving in the army is grounded in reasons of conscience”, adding:

In order to bring security to all people in Israel and Palestine we need to end the occupation.

Further away, War Resister’s International, a global pacifist and antimilitarist network with over 90 affiliated groups in 40 countries, sent a letter to the Israeli Defense Minister Avigdor Lieberman” asking him to reconsider Helman’s case.