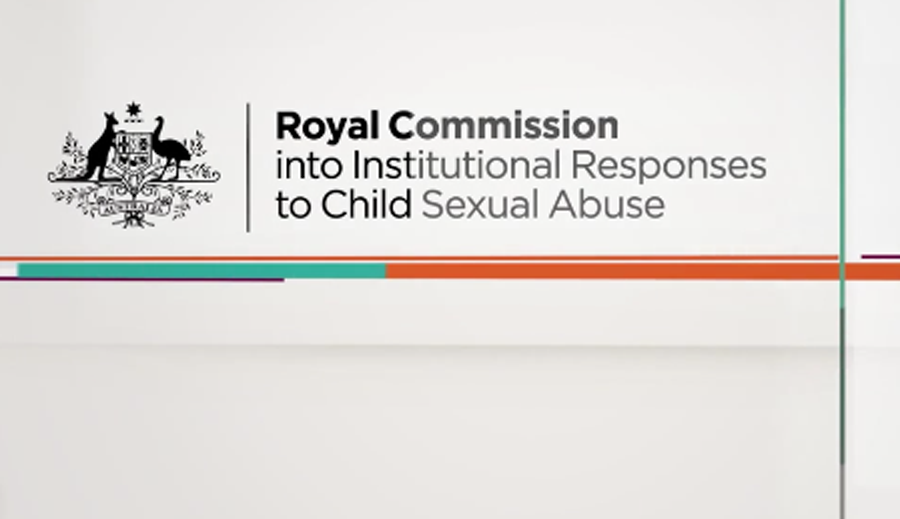 Screenshot from video ‘Giving evidence at a public hearing’ by The Royal Commission into Institutional Responses to Child Sexual Abuse (CC BY 4.0)

Australia's Royal Commission into Institutional Responses to Child Sexual Abuse was always certain to stir controversy, particularly with regard to the Catholic Church, and it did just that when it delivered its  final report on 15 December 2017.

The Royal Commission came about because of, as the report explains, “the sexual and other abuse of children in institutional settings, and the reluctance of those institutions involved to address this problem.” Its five years of hearings had already revealed widespread criminality, cover-ups and systemic failures across a wide range of both religious and other organisations.

According to the final report, the commission, which cost 500 million Australian dollars (380 million US dollars), was contacted by 16,953 people covered by its terms of reference, heard from 7,981 survivors of child sexual abuse in 8,013 private sessions, received 1,344 written accounts, referred 2,562 matters to police and made 409 recommendations.

For many people, its real achievement has been to air the voices of individual survivors who in many cases have waited decades to be heard. A total of 3,956 survivor “Narratives” are on the commission website with this warning: “This story is about child sexual abuse. It may contain graphic descriptions and strong language, and may be confronting and disturbing.”

It has also published a book, “Message to Australia“, containing handwritten messages from survivors to be kept at the National Library of Australia. They can be viewed online. These are just three of the 1,054:

I now feel free and can live my life.

Please be kind to children. Don’t tell lies. Always tell the truth if children are hurt like me.

Thank you @CARoyalComm for entrusting us with the stories from child abuse survivors in the book, Message to Australia. We will keep them safe.https://t.co/U3LgPKO1Rg pic.twitter.com/Z0WP9AJJtM

The ‘Message to Australia’ by survivors of child sexual abuse given to the Child Abuse Royal Commission has now been published online: https://t.co/PJDTmFE3hc
Suffice is to say that it makes for heavy (but thoroughly important) reading. #CARoyalComm pic.twitter.com/b5DI6BYOwr

One of the key issues has been the redress of past and future child sexual abuse, including monetary compensation. Recommendations from 2015 calling on the Australian federal government to set up a single national scheme have yet to be fully implemented.

Federal parliament has yet to pass legislation and some key states and institutions have not committed themselves. Queensland law professor Ben Mathews examined the implications in an article for news analysis site The Conversation:

This watershed inquiry has created the conditions for a seachange in how society deals with child sexual abuse in institutions, which can flow to our treatment of sexual abuse in other settings.

[…] We must focus our efforts on the future, but we must also ensure we properly deal with the past. Perhaps the single most important aspect of this is the redress scheme.

Others have a problem with the proposed scheme's coverage:

Controversially, the government proposes to exclude from redress anyone convicted of sex offences, and those sentenced to prison terms of five years or more for crimes such as serious drug, homicide or fraud offences.

This proposal is profoundly flawed and a step backward. […] Although it might be politically popular – and less expensive – to separate applicants into the categories of “deserving” and “undeserving” victims, it is morally wrong to do so.

Matthew Bowden is one of many people on social media who agree:

It’s essential we don’t apply a moral judgement to redress & create a divide between a perceived deserving & undeserving survivor of child sexual abuse. The National Redress Scheme needs to be for ALL @CLAN_AU @cporterwa @DanTehanWannon @TurnbullMalcolm https://t.co/8AceWVmVMk

‘As a human being and a Catholic I am appalled…’

A considerable amount of media and public attention has concerned the Catholic Church in Australia. This graph from the Final Report – Preface and executive summary helps to explain why: 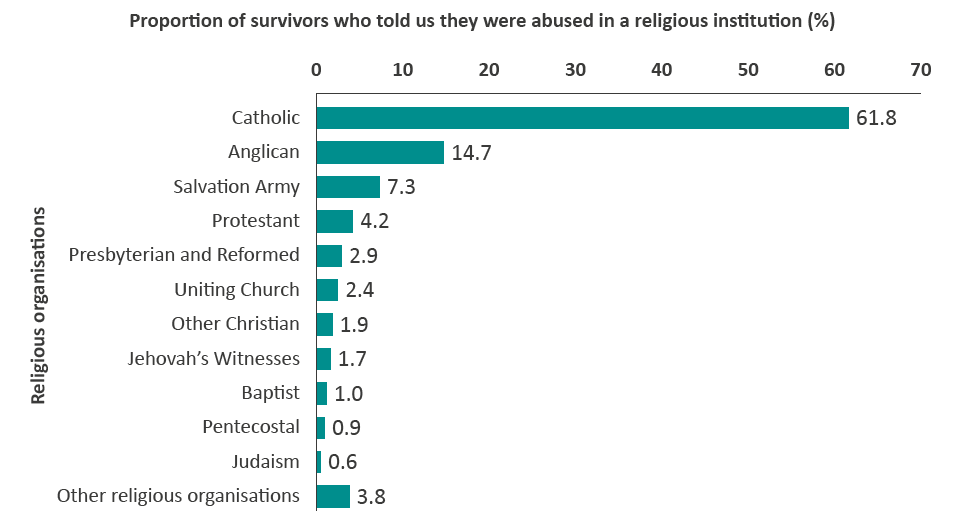 Proportion of survivors who told us they were abused in a religious institution (%) – source Final Report – Preface and executive summary (CC BY 4.0)

Two issues are particularly challenging for the Catholic Church. The commission recommends (Reco. 7.4) that “information disclosed in or in connection with a religious confession” not be exempt from laws regarding mandatory reporting. The so-called sacrosanct (untouchable) nature of the confessional has brought strong responses such as @noplaceforsheep’s tweet:

If you think Catholics are being picked on, don’t forget it’s the only institution that has committed to continue its practice of protecting child abusers.

Adrian Piccoli reacted strongly to news that the Catholic archbishop of Melbourne, Denis Hart, had repeated his belief that the seal of the confessional can't be broken:

As a human being and a Catholic I am appalled that this “man of God” would put protecting his place in the church ahead of protecting a child from sexual abuse. Surely it’s worth being excommunicated if it was necessary to save even one child from abuse. https://t.co/WElMJJXiQx

The @Pontifex comments on the final report of @CARoyalComm and says he will study in depth. https://t.co/a7cCBck8yR

I saw the recc about celibacy and snorted. Yeah, I bet the pope will get right on that

Meanwhile a committal hearing for Australia’s only Catholic cardinal, George Pell, will take place next March to decide whether he will stand trial on undisclosed sexual charges. It will be held behind closed doors.

There are many reminders online that the commission has exposed child sexual abuse by numerous religious groups and other organisations. For example, Jim Luthy has clearly lost all trust in the Salvation Army:

Why did you think you could trust the @salvos? They are a church that abused children in every conceivable way. I was in one of their homes. They committed crimes against children & then denied it ever happened. Liars. Donate elsewhere please. https://t.co/wegyrIqBvT

The royal commission is arguably the most significant outcome of Julia Gillard’s three years as prime minister from 2010 to 2013. Her role in calling the inquiry was not forgotten:

The #CARoyalCommission was conceived and brought into being by @JuliaGillard..

She will go down as one of our greatest ever Prime Ministers for this act of courage & decency..

The other person to receive high praise is commission chair Justice Peter McClellan, who is to retire as an appeal judge of the New South Wales Supreme Court in 2018:

Royal commission chair Peter McClellan to retire, supported by abuse survivors https://t.co/c0EbeaCcV4
The occasion found the man. Maintained the confidence of all throughout. Australia is indebted to him and many others.

Some final words from the commission:

We hope that the act of sharing these narratives with the public will contribute to a better understanding of the profound impact of child sexual abuse and that survivors will feel validated, heard, encouraged and strengthened by their publication.