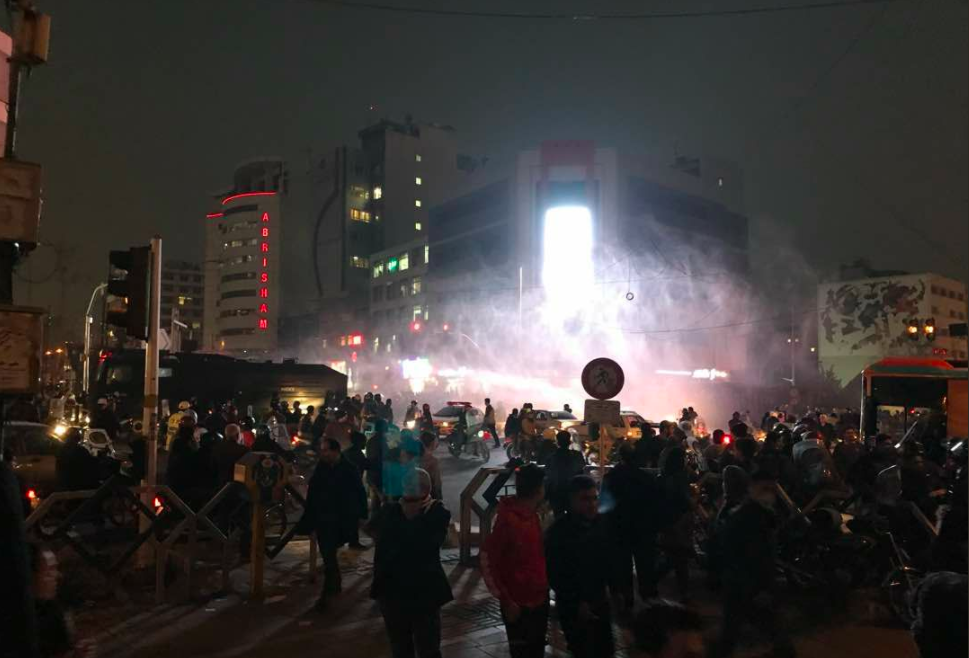 It's clear by now that something has been brewing in Iran. On 28 December, protests broke out in Mashhad [2] over the ‘high prices’ of everyday goods and spread to smaller towns and major cities by 29 December. Theories about what is driving the current situation abound, with many conjectures and theories being prematurely shared on the issue.

I am skeptical of those who have more answers than questions about #Iranprotests [3].

To better understand the current situation, it is important to look at Iran's recent history and unpack some of the potential motivations behind these events. Here is a look at what is happening on the ground, how it differs from the 2009 protests, and why some people think that there is a lot more to this situation than meets the eye.

Scenes on the ground:

These protests have been the first on this scale since the 2009 protest movement against the re-election of President Mahmoud Ahmadinejad [5]. As in the 2009 protests, there is a widespread national mobilization against the status quo; however, these current protests lack the support, and in some ways, the leadership of the reformist candidates that the Green Movement [6] had with Mir Hossein Mousavi and Mehdi Karroubi. This time, the protest chants seem to speak about a general dissatisfaction with both the reformist, the moderate, and the hardline elements in Iran.

Here is what we do know so far: there are protests occurring across the country; there is footage of various protest chants which outline people's disillusionment with not only the Islamic Republic's ruling system but also the moderate government of Hassan Rouhani; there does not seem to be one collective goal or leader in mind; however, the protesters seem to be voicing dissatisfaction with unemployment and economic stagnation; there are many perspectives and interpretations being spread across social media; there have been fears that the Internet will be cut off; and there have been some Iranian users reporting some offline connections, disrupted cell services, as well as VPN services no longer working.

OpenVPN is not working

But Psiphon is working.

Mobile Internet from Hamra Aval was off from 21h until now in Karaj.

However, in general, the country remains online and the steady stream of protest footage is coming in from all across the country.

Personal experience: I had access to the internet all day long without any problem. some said they had few problems w/ internet for 1 or 2 hours, but every things went back to normal. Infact in these 3 days of protests there is'nt any serious disruption yet.

At the moment, the only Internet loss seems to be access to the major social media platforms Telegram and Instagram. In Iran, there are an estimated 40 million monthly users (in a country with around 45 million users online) on Telegram and around 20 million on Instagram. Telegram founder Pavel Durov  [17]tweeted this message about the situation:

Iranian authorities are blocking access to Telegram for the majority of Iranians after our public refusal to shut down https://t.co/9E4kXZYcP9 [18] and other peacefully protesting channels.

What is behind the protests?

While many experts are weighing in on the situation, one notable commentator inside of Iran raised a few questions. Sadegh Zibakalam, a reformist-oriented University of Tehran political science professor, noted the reasons behind the protest and some of the peculiar new chants in favour of the former deposed monarchy. The post was shared widely on Instagram [21] and Telegram [22]:

It's true that the government of Mr. Rouhani has not been the most successful in terms of economy, but what is the cause of the upset of the people today and the frightening situation of Iran is not just the politics of Rouhani in these past 6-7 months, nor even last 4 years….

The nature of dissatisfaction and frustrations are different since 2009. The 2009 protests were political but now the protests are economic and apolitcal. Who thought that in Iran after 40 years of the Islamic Republic that you would hear chants in favour of a monarchy and a king, and even a few slogans calling for the return of the king and the Pahlavis?..

Despite the surprising chants in favour of the monarchy, it remains unlikely their return and support is a widespread theme of these protests, but rather one type of chant in series of demands, expressions and protests.

There is also a general feeling that the events were spurred on by hardline elements to undermine President Rouhani. Journalist Golnar Motavelli reports this theory from Tehran through her monitoring of Iranian media:

7/ This is significant because it shows that the Mashhad protests, whether spontaneous or not, in the very least had the sympathy and support of the hardline conservative establishment, particularly in the city itself

According to Golnar however, it seems since the chants in the protests have taken on the theme of overall dissatisfaction with all the leaders of the system and that, those who hardline conservatives who may have initially supported the protests, have essentially lost controlled.

10/ “something else is going on behind the curtain” he then said, addressing whoever it is he thinks that is (ostensibly hardline elements), that “their smoke blew back in their faces”, a Persian way of saying “you shot yourselves in the foot”