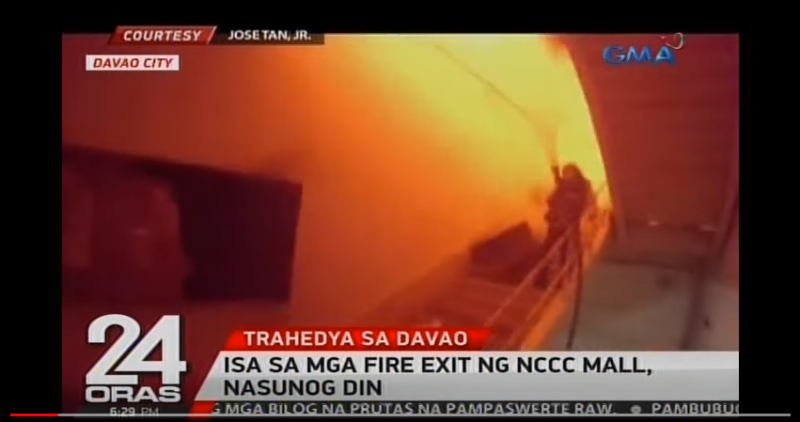 Survivors of a mall fire that led to the death of 38 workers in the southern Philippine city of Davao have turned to social media to share testimonies and grieve. A fire gutted the four-story NCCC Mall in Davao on December 23 at 9:30 the morning and was declared extinguished on December 24, Christmas Eve. Their stories reveal how the NCCC Mall was not structurally equipped to handle the blaze. Authorities say that 37 of the 38 victims are call center workers of Survey Systems International (SSI), a United-States-based outsourcing company operating a branch on the mall’s top floor.

Labor rights activists have compared the tragic fire to a factory fire in a Philippine export processing zone earlier this year wherein over a thousand workers are allegedly still missing and a deadly slipper factory fire in Manila last 2015 that burned alive 72 trapped workers.

The following are SSI call center workers’ personal accounts posted publicly on Facebook detailing their escapes from the burning call center. Val Huera recalled a tone of exuberance before Christmas break when the fire occurred:

It was the last day of work before the holiday celebrations so everyone was excited to go home. 5-10minutes before 10am, we smelled something burning like plastic or toxic fumes and seconds later, smoke started coming out from our airconditioners. Everything happened so fast because in just a few seconds the smoke started to get very heavy and dark so we all ran to the fire exit near the locker area shaking and shouting.

Huera described how the fire exits became impassable because of the heat:

People were already crowded as we approach the fire exit. I heard someone shouting, “Balik kay dili maagian ang fire exit. Init kaau sulod!” [“Go back, fire exit is impassable. It's so hot inside”]. So we slowly moved back inside but as we approached the attendance area, people from the 2nd fire exit came rushing towards us and said it's also impassable there.

He expressed fear and realized the sprinklers did not work:

I honestly thought i was gonna die that time ‘coz i already had a hard time breathing. The sprinklers did not work so someone who has water with them threw it in the air and i even got some water on me which apparently turned into black ash stains on my jacket.

Simultaneously, the lights went out. There was no electricity. It was dark, people started screaming. Smoke was starting to cover us. I maintained composure, I saw my girlfriend and grabbed her and she was at my left arm. At my right arm is one of our agents, at our back is one agent as well, and upfront is our 5 months pregnant agent. I told them to stop crying and cover their mouths. ZERO VISIBILITY. I was just trying to remember how many steps I have to make to get back inside the office.

A colleague who was just behind me got trapped in the locker area and was not following me anymore. I saw them and heard them say, “go back go back it is too hot it is unbearable! CR [Comfort Room]! It is very traumatic. Those trapped in the locker areas are my co-workers! Unfortunately they were unable to go out to the lobby! Both fire exits were impassable. We even tried to break the glass at the locker by the billiard hall because people wanted to jump out! But the glass was too thick and unbreakable. We were unable to see anything anymore and the smoke was too painful to the throat! I cannot imagine what they felt inside struggling to breath.

Reggio Colina testified that no alarms sounded when the fire broke out:

No alarms from the mall or any word from any mall employee downstairs that there was already a fire going on minutes ago on the lower floors. We only found out when smoke just came out from the AC and everything was almost too late.

We tried to back in on every possible entry and it was too hot and the smoke was too thick. It was too hot for the face and even those with gear looks like the plastic on the helmet would melt… We kept on going back to the entry points but the heat was too unbearable even for the fire [fighting] special unit wearing special gear.

Labor groups like the BPO Industry Employees Network (BIEN) are calling for an independent investigation to hold those responsible accountable:

We have seen too many similar man-made disasters to our fellow workers in the Philippines alone—Kentex fire in 2015 and HTI fire earlier this 2017 to name a few. What happened in SSI in Davao only shows that even workers in the so-called ‘sunshine industry’ are not free from fatal work hazards… Justice must be served to the victims and those accountable must be penalized so as to avoid future workplace deaths.

Hours to go before Christmas. Makasad because of what had happened sa davao. Typhoon vinta and NCCC mall on fire. Sad to hear the zero survival of those people trapped inside. God, help us to survive all of this. #VintaPH #NCCC #ccto pic.twitter.com/N4zUo6OQcg

Fewer etchoserang people. But NCCC employees seen in the area.
S&R is temporally closed atm, according to guards. pic.twitter.com/cGKj8b6Yi0