From Political Icon to Tyrant: President Duterte, According to Philippine Protest Effigies 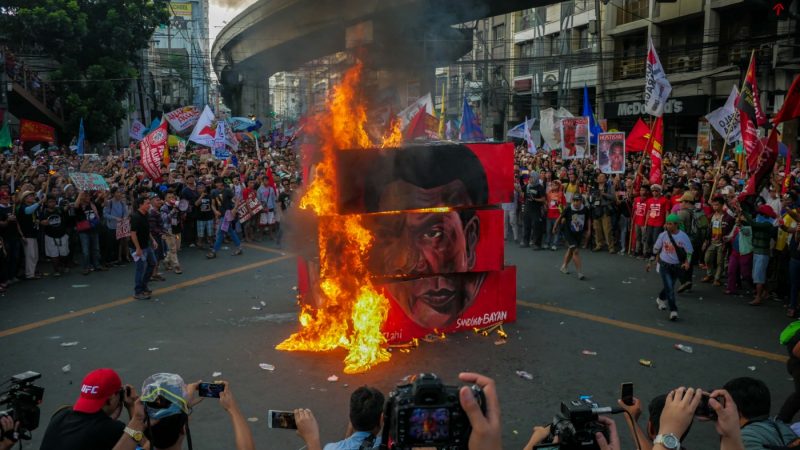 Rody's cube being burned at Mendiola bridge just outside the gates of the presidential palace. Source: Manila Today. Used with permission.

The world saw a glimpse of the creative protest art in the Philippines when international mainstream media took notice of the Donald Trump effigy burned by protesters during his visit to the country for the Association of Southeast Asian countries, or Asean, meeting from November 12 to 14.

The figure of an angry Trump with four arms formed into a rotating swastika was created by the Ugatlahi Artist Collective and even got featured in the US-based popular comedy program “Jimmy Kimmel Live”.

“The Fascist Spinner” symbolizes fascism, war, militarism, and plundering of resources. Duterte the “Strong Man” hiding behind Trump's leg represents him being a lap dog of the US. #BanTrumpPH

Year after year, effigies are one of the much-awaited centerpieces in major protest actions in the Philippines led by the leftist activist umbrella group Bagong Alyansang Makabayan, or Bayan for short. Bayan means “people” in Tagalog.

The effigies typically depict Philippine presidents or other figures and how they exploit and oppress the Filipino people. It has become a ritual to end rallies with the burning of the effigy to symbolize collective indignation against the reigning order.

The Bayan protest effigies created since the coming to power of President Rodrigo Duterte have interestingly also reflected the evolving position of left-leaning activists and rights advocates towards his administration.

There was no protest effigy during Duterte’s first State of the Nation Address on July 23, 2016. Ugatlahi Artist Collective, which has traditionally done Bayan’s effigies since the 1990s administration of President Joseph Estrada, instead prepared six 9-feet-tall paintings that portrayed what they considered to be the people’s agenda.

Many have initially welcomed Duterte's resumption of peace negotiations with the armed communist movement, the appointment of leftist ministers in the Duterte cabinet, assurances of releasing all political dissidents, and promises of implementing reforms.

But this relatively positive view of Duterte soured soon enough as the bodies of drug suspects, allegedly killed by state forces with no due process, kept piling up; peace negotiations with the armed communist movement got bogged down; and talks of social reforms came up empty-handed.

Come December 10, 2016, an effigy of the late dictator Ferdinand Marcos was burned in Mendiola bridge just outside the presidential palace compound during the protest action on International Human Rights Day. The remains of Marcos, who died in 1989 after ruling the Philippines for 21 years with authoritarian brutality, would be given a hero's burial on a year later, on November 17, 2017, by Duterte.

In a Facebook post, the group warned Duterte against following Marcos’ footsteps lest it will be his effigy’s turn to burn next.

And this was indeed what happened next with the burning of a succession of Duterte effigies, including one depicting a missile with Duterte's head being ridden by Trump during the anniversary of the Philippine Senate’s rejection of the US military bases on September 16, 1992.

LOOK: An effigy of US President Donald Trump and Pangulong Rodrigo Duterte that will be burned at the rally during the Caravan.

“Doots in Boots” — an effigy apt for the iron-hand and oppressive rule of Duterte and his administration. #LakbayMagsasaka pic.twitter.com/UZEW4TrZNn

LOOK: Protesters prepare to burn an effigy of Pres Duterte and US Pres Trump in front of police forces. | via @aprilrafales pic.twitter.com/iHiksKgUtx

During the September 21, 2017 rally remembering the dictator Marcos’ declaration of martial law in 1972, Ugatlahi created a 10-foot Rody’s cube effigy modeled on a Rubik’s Cube with Duterte’s face side by side with Marcos, Hitler, and a puppy.

Protesters burn an effigy of President Duterte's in Mendiola, Manila today. More on the Phillipines tonight on Lateline/Background Briefing pic.twitter.com/wuTkIyN7L2

The figure symbolized Duterte’s affinity with dictators and alleged puppetry to the United States with the rising number of human rights abuses amidst the imposition of martial law in Mindanao, the war on drugs, and all-out war against the communist movement.

Ugatlahi’s latest effort features Duterte’s face, which can be unfolded to reveal a demon inside accompanied by some of his recent statements: It was unveiled during this year’s International Human Rights Day protest in Manila City.

REAL FACE. Ugatlahi Artist Collective unveils an effigy depicting the fascism of the Duterte administration. Written on the effigy are some of the statements of the president.

Duterte's statements read: “I will admit it I am a fascist so I will categorize you already as terrorists”. “You should all endure poverty and hunger I don't care”. “I will follow America anyway they say I'm an American Boy”. “I will bomb all those schools of the Lumad”.

In conclusion, the artwork has shown how activists’ view of Duterte has changed, from one of guarded optimism over a populist figure seen to be open to pushing certain social reforms into one that considers him a tyrant out to destroy whatever democratic space is left in the country for human rights and progressive politics.