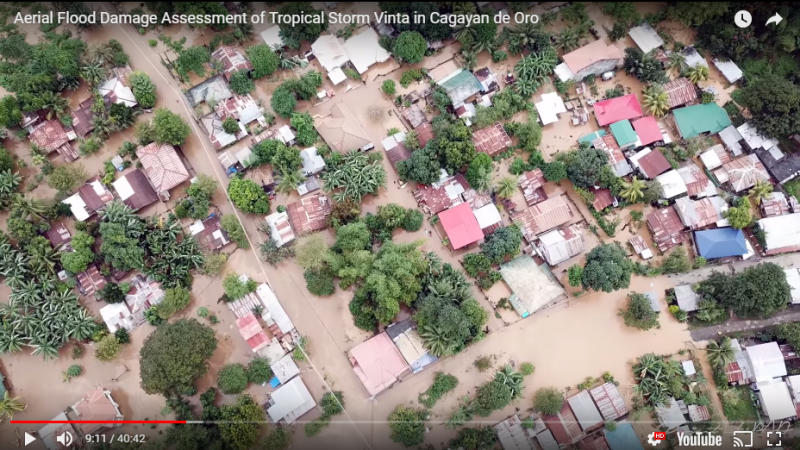 Tembin exited the country on Christmas Eve, December 24, leaving behind a trail of devastation across Mindanao, especially in the provinces of Lanao del Norte and Lanao del Sur and on the Zamboanga Peninsula. A mudslide caused by the storm wiped out the remote village of Dalama in Tubod, Lanao del Norte.

Netizens used the Twitter hashtag #VintaPH to monitor and give updates on the situation in the provinces battered by the tropical storm. Here are some photos showing the damage left by Tembin, as curated by social media users:

An aerial photo of part of Cagayan de Oro City that is flooding as of this moment, 22 December 2017, 10am.

Let’s also include in our prayers the families residing in Pagalungan, North Cotabato who are affected by #VintaPH. Unlike in Davao, they don’t have their evacuation center and as of the moment, no relief goods were sent to them ? pic.twitter.com/tkimluOJYr

Nature can flood their lives… but Filipinos won’t stop flooding the world with smiles and laughter. #BecomingFilipino #VintaPH #CagayandeOro pic.twitter.com/ADJOAGo8sb

Various groups are using social media to coordinate disaster response and relief efforts too. Some netizens have also expressed sentiments online attributing the severe impact of tropical storm Tembin to logging and large-scale mining by big corporations in Mindanao:

my two cents after #vintaph

my two cents after #vintaph

Deforestation by means of illegal logging in the Bukidnon area is the only reason I see why the city is quickly flooded and especially for the quick rising water from Cagayan de Oro river.

I CANT IMAGINE HOW THEY CELEBRATED CHRISTMAS IN MINDANAO AFTER TYPHOON #VintaPH DEVASTATED FAMILIES AND KILLED THEIR LOVED ONES, WHILE THE ILLEGAL LOGGERS AND MILLIONAIRE MINERS ARE ENJOYING HAM ON THEIR TABLES!
ANO @HouseofRepsPH and @senatePH masaya na kayo?

I CANT IMAGINE HOW THEY CELEBRATED CHRISTMAS IN MINDANAO AFTER TYPHOON #VintaPH DEVASTATED FAMILIES AND KILLED THEIR LOVED ONES, WHILE THE ILLEGAL LOGGERS AND MILLIONAIRE MINERS ARE ENJOYING HAM ON THEIR TABLES!

Guys, these are the effects of climate change and illegal logging. We must do something against them.

What happened to our fellow Filipinos in Mindanao because of the sever tropical storm #VintaPH is saddening.

Guys, these are the effects of climate change and illegal logging. We must do something against them.