In Memory of Aleppo 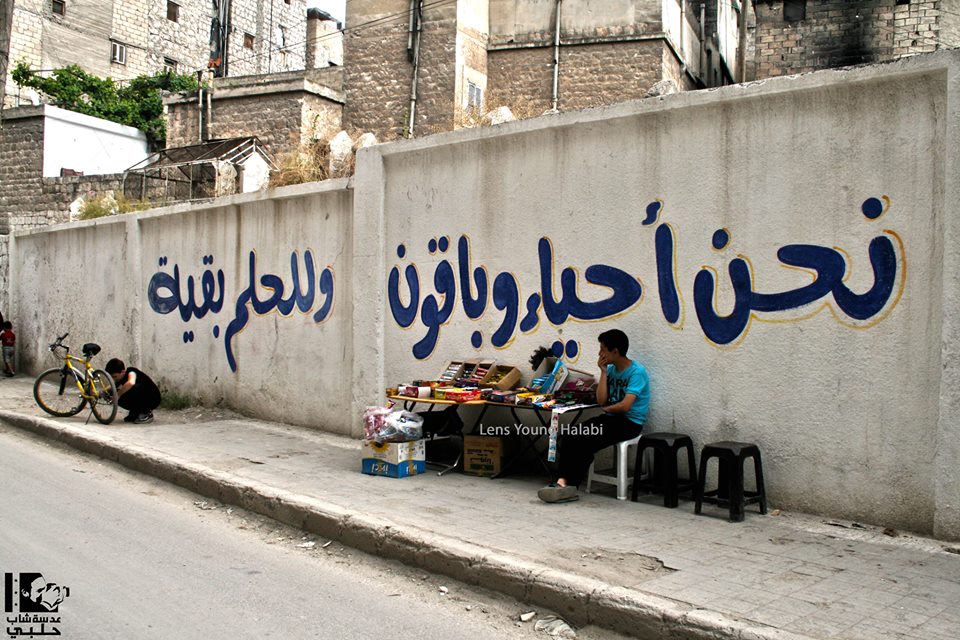 Photo by Lens Young Halabi showing a wall in 2013 with the sentence “we are alive and staying; for the dream we stay”. Used with permission.

To all those who will inhabit the places we left….

We once had a revolution there. I never resided in those neighborhoods, but was a visitor, a stranger, with all my little rituals, such as greeting the neighbor on the staircase in the morning, my frantic searches for products that were not customarily sold there, my long, obsessive conversations with taxi drivers in order to gauge their political leanings and their views on checkpoints.

We still have a revolution there, in Bustan Al Qasr. There you will see—unless the Barbarians have erased it—a childish sketch of a soldier and a bearded man with a hammer above them and the phrase: “a revolution that will crack heads”. This marked the beginning of our second revolution, one against those trying to confiscate our rights by force of weapon or religion. But you probably don’t know about the many revolutions we have had there, painted by Abu Maryam. You would probably not hear our voices as we tell you who Abu Maryam is.

We have a revolution there. At the “Karaj IlHajez” checkpoint some of our friends received such a beating! They were protesting to open the checkpoint for civilians.

We have a revolution there. At the medical center, we said farewell to martyrs, one after the other, and had countless conversations, talks, friends, injuries.

We have a revolution there. In the graveyard, we have friends. The closest of whom to me was Mustafa. We opened a school there that held his name. It is there too. The school gave us a reason to go on; we believed we were paying our debts. Mustafa’s grave and his school are yours now. If you ever pass by them, treat them with dignity, for this man was a wellspring of love, giving and devotion. We were part of his vision, and we failed.

We have a revolution there. A foolish foreign fighter wrote on the walls: “Freemasonry over”. We often laughed at his faulty grammar. And when the outbreak of Leishmania occurred, and some of us carried out spraying campaigns, we had our own graffiti which said: “Leishmania over”.  That was how we adapted, that was how we looked for solutions. That is why you will find our schools and our hospitals in basements. We were adapting to the bombings. We were trying to resist. We had a revolution there….

The Eye Hospital! There we protested over and over against Sharia Courts. There, ISIS murdered 35 of us. There, our protests erupted to expel them. There I was jailed—don’t swear yet—for there was also where I was released, because we have a revolution there.

Turn it back into a hospital. Not like our underground hospitals, but one for all people. The place is teeming with spirits that will look after the ill.

Old Aleppo was our resting place. There I used to go to sing; we the evil terrorists loved to sing, to love, to cook and at “Falafel House” to eat everything but falafel.

You would be amazed at the piles of rocks. These were the houses of families, houses that were probably all they had. They were forced to leave. Take some time to shed a tear in memory of their memories.

You would not recognize it. I used to leave for months, but could never get used to the magnitude of the destruction whenever I came back. That was what your neighbors faced, so shedding some tears would do no harm.

You would find, if they allowed, countless bodies under the rubble. It was not our intention to leave our bodies like that without a proper burial. It wasn’t that we were negligent, but the jets were targeting all groups, and it became impossible in the last months to move the vehicles.

Give them, if you’re ever allowed, a proper burial. You will not be allowed to find out their names, for sure, but please don’t just give them random numbers. Use your imagination and bury them together. Syrian families have been scattered enough, and nobody likes to be buried alone.

We have a revolution there. Curse it, or mourn it. It is there, in the rocks, in the graves, in the earth and above in the air.

On the wall of a graveyard we once wrote: “We are alive, we will keep going, and the dream will be realized”. Take whatever is left of us and keep on dreaming. Soon everything else of yours will be confiscated.