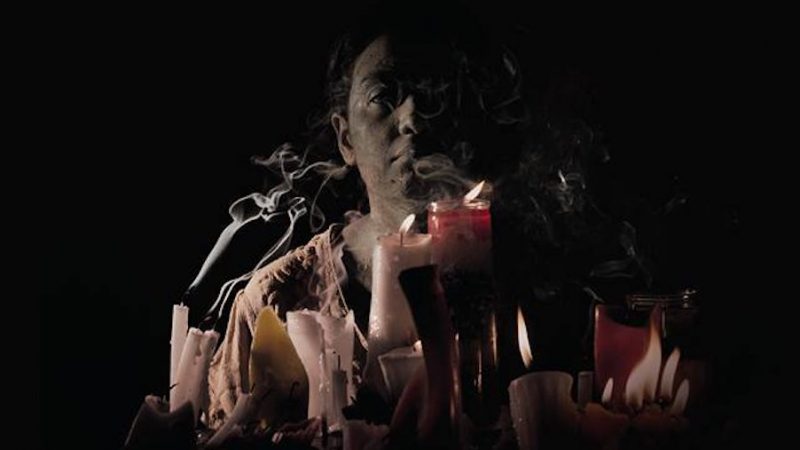 Detail from the theater piece poster of “Los Ausentes” (The missing ones). Image for public promotion widely spread on social media. Taken from the Ministry of Culture Twitter account.

In recent times, El Salvador has been marked by increasingly high rates of violence.  [2]In addition to gang  [3]activity and the harsh measures employed by the police force, the country is also plagued by the growing disappearance of victims [4] and the painful reality of mothers looking for their children's bodies.

These stories of the disappeared are at the center of two new Salvadoran theater productions which aim to place the victims and their families at the center of the narrative, calling on the public to think about the expansion of violence in El Salvador [5].

For many families, losing touch with a loved one — even if only for a couple days — brings the silent certainty of death. However, in many of these cases, there are neither corpses nor investigations [6] that help provide clues about what happened. These forced disappearances leave families — particularly those from the most vulnerable communities — with open wounds. In most cases, they are also left without any kind of protection from the State [7].

To find peace and to bury their children, these mothers search endlessly for the remains of their loved ones, even when their search is full of loose ends and unanswered questions. These are the stories that are often left untold in discussions about the violence afflicting El Salvador.

“Los Ausentes” (the missing ones), a new play by Alejandra Nolasco, [8] was born out of this silence. It was inspired by photographer Fred Ramos’ photo essay  [9]which details pieces of clothing that were last worn by victims of violence. For Nolasco, Ramos’ work was a calling to take action and led her to write a play centered around the character of Milagro, a mother looking for the remains of her son who was killed by a gang.

I don't want to look away. I want to look at what's going on. I'm moved and heartbroken by the fact that so many mothers in my country are looking for bones so they can bury them — even if that's all they find. I have no idea what that must feel like. I'm not a mother and I've never had to look for someone that way. [But] I ask myself the question, If I lost the most beloved thing in my life, what would be my limit? That's also the question I wish the public could ask themselves, so we can put ourselves a bit on other people's shoes. Other people that, for having less than we have, are always screwed in this small piece of a country in which we all live.

Theater as a mirror

For authors like Carlos Dada, “Los Ausentes” is proof that Salvadoran theater is going through a transformation. According to Dada, who wrote about Nolasco's play on elfaro.net [10], Salvadoran theater continues to weave together different stories of violence from the country's recent history. This history is a continuation of social ruptures with roots that go deeper than many people suspect, bringing about cycles that tend to repeat themselves.

If theater aims to be a mirror, “Los Ausentes” is a horrifying one. One that will project a grotesque image of the country we all inhabit to those in the Luis Poma Theater. […] A quarter of a century ago, the National Theater was marked by the great premiere of the post-war years, Carlos Velis’ “San Salvador after the eclipse” […] Today, after the disappointment, the uncertainty and the failure, the stage is, once more, the space where our dramas are represented. These are the same mothers looking for their disappeared children. The same sick society. The same shredded fabric. The broken text.

“Life back then was learning how to die”:

For the Moby Dick company, the aim of their production, “Bandada de Pájaros” (Flock of Birds), is to build a bridge between recent history and current events. The piece centers around the possible destiny of the disappeared during the Salvadoran Civil War, [11] a conflict which officially took place between 1980 and 1992.

75,000 people are thought to have died during the conflict — many of them civilians. In addition to the stark death toll, The Commission of Truth documented around 5,000 forced disappearances [12]. For many, very little has been done to look for those who have vanished. At the same time, many of those that perpetrated crimes have been protected by the Amnesty Law [13] that came with the Peace Agreements of 1992; [14]agreements that left a lot of questions and no answers for the victims.

The main characters of “Bandada de Pájaros” are the Márquez sisters, who have been disappeared during the war for not accepting the advances of a soldier. The sisters emerge from the earth amongst the dead leaves, existing in a space between life and death. Through their dialogue, the audience discovers different horror stories from the conflict.

For the actors of “Bandada de Pájaros”, the play is a discussion about the past and also a reflection of the present. It is about bringing back taboo subjects that are relevant to the violence that exists in the country today. Actress Dinora Cañéguez sees the play as a means to rescue the memories of the war. She also sees it as a way to understand the present:

“We talk about the martyrs of the war. And not only those of the war, but also [the martyrs] of today's [violence] as well…”

In an artcile published also in El Faro, journalist María Luz Noches sheds light on the symbols inside the play. The beginning and the end are seen in imaginary rivers and also subtle references to other pieces of art. One of those pieces is Carlos Cañas’ renowned painting “Sumpul”, which took the name of the river where one of the most serious crimes against humanity [15] took place during the war.

Bandada de Pájaros is full of symbolism; an abandoned flat field covered with dry branches is the place of encounter for Susana and Engracia [the sister characters of the play], a deserted environment, an imagined river that makes them wonder if it's indeed the beginning of life. A pile of filthy clothes, a gloomy atmosphere reminiscent of Carlos Cañas’ “Sumpul” where blood becomes flowers.

“Life back then was learning how to die”, says Ríos [one of the actresses] quoting [Salvadorian poet] Roque Dalton's words [18]. And watching the stage from the seat, we feel something dying inside ourselves.