The Chinese Communist Party Forbids Members From Celebrating Christmas, Calling It a Festival of Humiliation 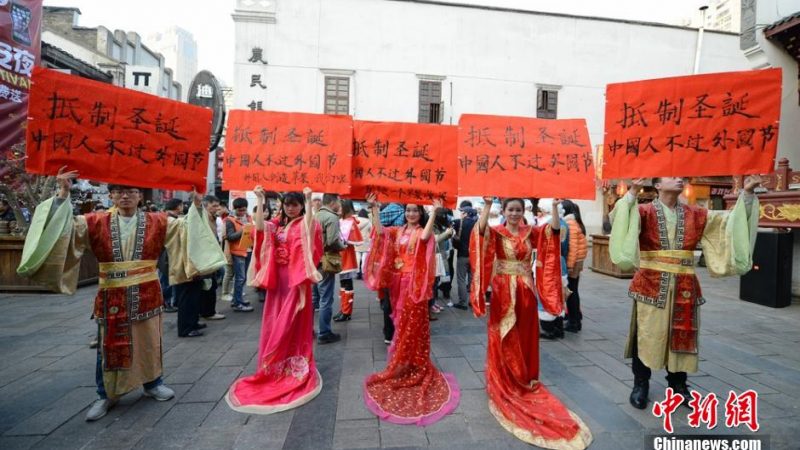 A number of Chinese Communist Party provincial headquarters have issued notices forbidding their members from celebrating Western festivals. These include Valentine’s Day, Easter, April Fool’s day, Halloween and, most recently, Christmas. In preparation for this holiday season, media outlets have also been instructed not to report any news related to Christmas, a celebration that the party feels is an unwanted reminder of China's historical humiliation by the West.

The movement against Western festivals emerged about a decade ago and was led by a group of contemporary Confucian scholars against a “Western cultural invasion”. Recently, Chinese President Xi Jinping has embraced this idea of a national cultural revival.

In January 2017, the General Office under the CPC Central Committee and the State Council jointly issued a high-level report titled, “Suggestions on the implementation of projects to promote and develop traditional Chinese culture excellence”. The report outlines a cultural revival project that combines Confucian values with the single-party political system which aims to rebuild the Chinese people’s cultural confidence.

This year, the anti-Christmas campaign has been marked by the circulation of an article that recites the history of Western military invasions in China during the First and Second World War, arguing that Christmas is a festival which represents Chinese humiliation.

The article defines the Christmas celebration as a religious practice:

Christmas Eve and Christmas, along with other western festivals of religious value, have been widely celebrated by Chinese young people for their exotic cultural traits. The phenomena is also thanks to the promotion of some individuals and organizations. The business sector also helps foster the atmosphere to attract consumers. The impact of Western festivals in society is getting stronger and stronger, while national holidays are less visible.
It can be understood that young people love chasing after unconventional and popular cultures and the business sector wants to make money from Western festivals. But for CCP members and officials, they should not follow the trend as the issue is a matter of political belief and practice.
All these Western festivals have religious backgrounds and should be considered to be a part of religious practice.

It also argues that the popularity of Western festivals is a form of cultural invasion that members of the CCP should not be taking part in:

If an atheist is celebrating religious festivals, his or her belief is inconsistent.
Moreover, festivals are the embodiment of the value of a national culture. Every nationality has its festival heritage which brings the nation together.
If a nationality is so keen on celebrating other nations’ festivals, the phenomena is indicative of a very serious cultural invasion. If party members and officials are not aware of this, they have lost their political sensitivities and progressiveness.

The article recites the history of the Eight-Nation Alliance to argue that Christmas is a festival of Chinese humiliation. The international military alliance was formed in reaction to the Boxer Movement in China which took place between 1899 and 1900. Supported by the Qing government, the Boxers attacked and killed foreign missionaries, nationals and Chinese Christians across northern China. The conflicts led to the invasion, occupation and looting of Peking in 1900.

Apart from Japan, all of the countries have Christianity as their national religion. […] The spread of Christianity in China during war times is imprinted with the word “humiliation”. Christmas is a festival celebrated by Christians and, is hence, a wound of Chinese people. It is not suitable for the Chinese. We should not forget the shameful history of our country.

Many party members said that they have received notification from CCP branches in universities or state corporations, informing them that they should not take part in Christmas celebrations. On Twitter, @szshu shared the news about CCP’s Western festival ban:

The Communist Youth League (CYL) in Anhui wrote on Weibo on 17 of December that Christmas should be regarded as a festival of Chinese humiliation because of the history of Western invasion. A number of authorities have banned CCP members from celebrating Western festivals. In Hengyang of Hunan, the disciplinary department of the CCP has banned members and officials, as well as their family members, from attending Christmas parties.

Media must not report news related to Christmas. New media platforms of all levels, do not forward posts related to the “foreign holiday” topic. (December 22, 2017)

On Weibo, one of China's most popular social media platforms, some agreed with the CCP’s Christmas ban:

For three decades since the drastic transformation in USSR and eastern Europe, Western ideology headed by the U.S has been advocating for peaceful transformation in China, like boiling a frog in warm water. China has lost its ideological battlefield for three decades. Just look around, there are so many Western slaves. This is a desperate defensive act, a cultural battle without gunfire.

However, others mocked the ban:

So the means to promote traditional festival is to ban other festivals. Wow, should I praise you for being so smart?

Karl Marx is a pure foreigner, should we believe him?

We forget our ancestors because we celebrate Western festivals? Our ancestors do not have enough confidence or have they lost their sense of existence? anno Domini (AD) means “in the year of the Lord”, we should not use that anymore and use the lunar new year instead.

I am a party member, but my girlfriend is not. She wants to spend Christmas with me, what should I do?