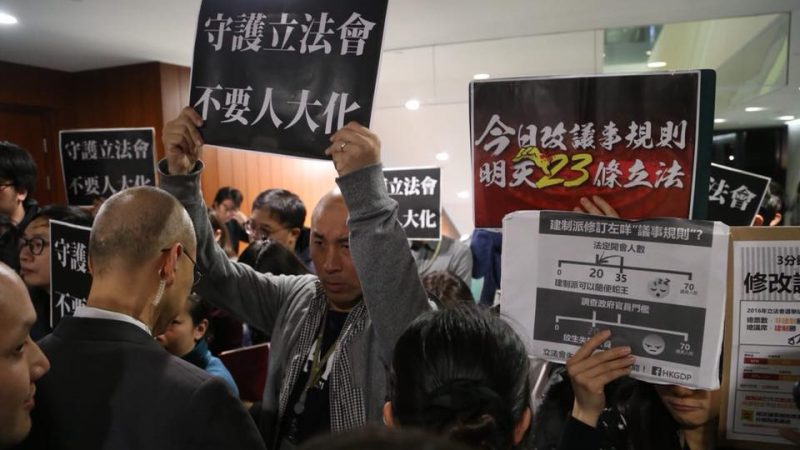 Santa Claus isn't the only thing coming to town, some in Hong Kong fear, after pro-Beijing lawmakers in the city's Legislative Council approved changes to procedural rules that aim to quash democrats’ filibustering of controversial legislation and expenditures for huge construction projects.

Hong Kong is a special administrative region of China with more economic and personal freedoms than the mainland, a set-up known as “One Country, Two Systems.” In recent years, however, Beijing has been pressuring Hong Kong to introduce new laws that strengthen the “One Country” part of the principle.

For example, the Hong Kong government is in the process of introducing a law that punishes those who deliberately disrespect the Chinese national anthem. That is because in October, the Standing Committee of the National People's Congress incorporated the mainland’s own restrictive national anthem law into Hong Kong’s mini-constitution, thereby compelling Hong Kong to pass local legislation on the matter.

There's another constitutional obligation looming for Hong Kong: Article 23 of its Basic Law, as the mini-constitution is called, requires that potentially troubling national security laws be implemented: 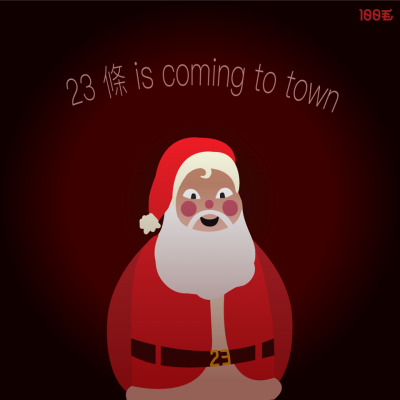 “Article 23 is coming to town.” A political satire of the newly passed Legislative Council house rules by social media outlet 100 Most.

In 2002, the Hong Kong government proposed an anti-subversion bill to satisfy Article 23 that would have, among other things, criminalized seditious speech and could have even criminalized NGOs having connections with foreign groups. The effort was met with a massive protest, and the legislation process has been halted ever since.

Many people, however, believe otherwise. One viral image reflecting that concern was distributed by Facebook-based media outlet 100 Most. It shows Santa Claus framed by text that reads, “Article 23 is coming to town” in a riff of the classic Christmas song.

An important change to the understanding of quorum

So what rules were changed? On December 15, pro-Beijing lawmakers successfully modified the Hong Kong Legislative Council’s Rules of Procedure, the most controversial changes being:

1. the reduction of the quorum needed for the “Committee of the Whole Council” stage, from 35 to 20;
2. the increase of the number of lawmakers’ signatures needed to form an investigatory committee, from 20 to 35.

The details of how these changes affect legislative process are complicated, but to explain it in simple terms: The current Legislative Council has 70 members, with the pro-Beijing camp outnumbering the democrats. Without the power to veto, the democrats have instead delayed readings of bills in an attempt to influence lawmaking, either by reviewing the text of the bills clause-by-clause or demanding a headcount to confirm there is quorum, or both.

The Basic Law's Article 75 defines quorum as “one half of all its members,” or 35 according to current composition. If there are fewer than 35 legislators in the main chamber, the chair then suspends the section until the quorum meets the minimum. This tactic bought democrats time to raise public awareness of the issues at stake.

Pro-Beijing lawmakers, however, have slammed the filibustering as destructive. The procedural change reducing the quorum needed for the “Committee of the Whole Council” from 35 to 20 is meant to disrupt the democrats’ stalling; the pro-Beijing camp argues that the “Committee of the Whole Council”, which has up until now functioned as a meeting of the whole Legislative Council, should be understood as any other sub-committee which does not abide by Article 75's quorum requirement.

The second controversial change, increasing the signatures needed to form an investigative committee from 20 to 35, also seems directly aimed at democrats, who currently have no more than 30 lawmakers.

Knowing that they would not be able to block the changes inside the Council, pro-democracy legislators and their supporters camped outside the legislature to call for public attention for five days between December 11 and 15.

On December 15, to stall the voting on the changes, a number of democrat lawmakers protested inside the chamber. Eleven of them were ordered by Council's president to leave, and the changes were passed.

A petition co-signed by a group of university professors and scholars argued that the changes will end up weakening the Legislative Council’s power to counter-check the government:

We object to the amendment proposals because once such amendments are passed, they stand to gravely weaken the Council’s power to monitor the government, already minuscule as they are, and allow the all-powerful executive authorities to escape legislative oversight even further, rendering a much increased chance of Hong Kong heading towards an authoritarian system.

Daniel Tam, an assistant to pro-democracy lawmaker Chu Hoi Dick, explained the technical details of how the changes will undermine the authority of the Legislative Council as a whole:

The Committee of the Whole Council is formed between the second and the third reading to review the bill, and the result of the revision is further deliberated in the third reading. If the quorum is reduced to 20, that means it takes only 10 lawmakers [actually, 11 would be the minimum majority of votes required] to decide on the actual text of the third reading. A law, which is likely to take effect for a few decades and affect Hong Kong people’s daily lives, is to be determined by 1/7th of the total number of legislators before it enters the third reading. Such changes definitely will harm the internal operations and the integrity of the Council.

The changes to the Council’s house rule could have a direct impact on a series of upcoming bills that potentially curb Hong Kong people’s rights and freedoms, university professor Sing Ming argued, quoting a comment from his friend on Facebook:

Once the Legislative Council is turned into a rubber stamp, all large white elephant projects, over-expenditures, evil laws and so on will be passed swiftly even before ordinary citizens notice the issues. National education, national anthem law and Article 23 will not have due deliberation in the Legislative Council. In particular Article 23, when local enacted, could be written according to the liking of the Chinese Communist Party. Though reinterpreting the Basic Law that Article 23 is the Hong Kong version of the mainland's National Security Law, the crime of “provoking trouble” could come into existence in Hong Kong.

Pro-democracy legislators have asked the chair of the Legislative Council to seek clarification from the court on the interpretation of the Basic Law's Article 75 on quorum. If the changes are in violation of the Basic Law, all laws that passed under the new procedural rules would be voided.