Screenshot from the Public Service Announcement (PSA) done by American singer, actress and activist Mandy Moore for PSI Caribbean, for the Gender-Based Violence “Make It Stop” Campaign in Trinidad and Tobago.

On December 17, 2017, news broke in Trinidad and Tobago about the murder of Samantha Isaacs, who was shot dead by the father of her child. The perpetrator subsequently killed himself.

Gender-based violence has become an increasingly difficult issue for the Caribbean region to deal with, but Trinidad and Tobago in particular has been plagued with a significant number of femicides.

This most recent murder struck a chord with many female netizens, partly because — as was firmly established by the globally viral hashtag #metoo and the regionally recognised #lifeinleggings — women have a sense of being under constant threat, and partly because murders like Isaacs’ could have been prevented.

Kahriym Garcia, Isaacs’ former partner, had a history that should have been a red flag for the authorities — his grandmother had reportedly taken a restraining order out against him because he tried to kill her; on one occasion, he put a knife to Isaacs’ mother's throat; and he would repeatedly threaten to kill Isaacs and her family. Isaacs attempted to take Garcia to court for child support and sought a restraining order against him, but the magistrate kept delaying the case.

We mourn the loss of 27-year-old Samantha Isaacs.

Samantha was shot by her abusive ex-boyfriend in Trinidad & Tobago.

She leaves behind a 4-year-old son.

Our thoughts and condolences go out to her son and family. May justice prevail… #lifeinleggings #evaw #restinpower pic.twitter.com/yXR3RDgS1b

In an editorial posted the day after Isaacs’ death, the Sunday Express wrote:

Every murder is gut-wrenching but there is something particularly awful about a victim being pursued to a preventable death despite seeking the protection of the police and the courts. […]

No one can plead innocent to the risks faced by women desperately trying to escape an abusive relationship. Yet, such cases continue to be treated with a certain casualness by institutions and by individuals for whom victim protection is never highest priority. […]

With close to 50 women already murdered this year, the issue of violence against women is no theoretical matter. […]

Counselling, policing, protection, detection—policies and programmes for all of these and more have been discussed ad nauseum. What remains to be done is implementation.

For many of us this is another Sunday of re-living our own traumas at the hands of lovers, relatives, friends. For many of us this is another Sunday of opening old wounds, past hurts and wondering if we are next. People are sharing stories and crying out for help and most of us, especially those of us who do this work every day, cannot bear the burden of another story. What happens after the story of is shared and we are submitted to the anonymous violence of online shaming?
If it's too much, please switch off. Disconnecting from this is an act of radical self care and survival. We are all angry and we are all terrified and we are all hurt. But we are still here. We owe it to those who are no longer with us to seek help and healing.

The “online shaming” she talks about refers to the curious phenomenon among some social media users — women included — of victim shaming and showing sympathy for the father, who Isaacs reportedly kept from seeing their child.

Comedian Simmy Behave, who experienced an abusive relationship herself, was having none of it. Creating a powerful hashtag, #nomoresilence, she began to curate women's stories of domestic violence and explained why:

From my experience, that's what it felt like. Silence. You lose your voice in an abusive relationship. You feel like you can't say anything or you have to choose your words more carefully.

So you stop speaking up. You hide from friends and family or you get isolated from them.

Sometimes you will make all the steps needed to get out and you will be successful but there are some who don't make it out of physically abusive relationships alive.

It's not about choosing your partner carefully. [The country's prime minister recently faced a backlash for suggesting women needed to be more vigilant.]

Calling Trinidad and Tobago “a ‘licks-based’ society” (“licks” is a local term for “beatings” and corporal punishment is all too common as a means of “disciplining” children), she also encouraged men to share their perspectives under the above hashtag.

Netizens immediately answered the call, many anonymously for fear of being harmed. The comedian posted scores of harrowing accounts on her Facebook page that included tales of a skewed sense of ownership, a dangerous dependency syndrome, beatings during pregnancy, and sexual assault, some of which occurred when the women were minors.

Some women were desperate to be free of their abusers in the new year, while others wanted to help them. One survivor lamented the state of the court system in the country, and others admitted they no longer went anywhere alone. One woman remained in the abusive marriage for decades, and heartbreakingly, a child of abuse spoke of how she repeated the same patterns in her own life.

The hashtag has raised questions that many social media users have been asking for some time, about hyper-masculinity and the way boys are socialised, about resulting male aggression, and about women's inability to leave abusive relationships, no doubt tied to the failure of state systems and institutions to protect them.

Criminologist Renee Cummings has been consistently sharing advice and resources on this and other violence-related topics via her Facebook page. In February 2017, she noted:

There seems to be a growing misconception that interpersonal violence, intimate partner violence or domestic violence that ends in homicide (man murders woman) is a crime of passion. It is not. If anything IPV and DV are more akin to acts of terrorism than crimes of passion. An intimate partner/ex-intimate partner leaves where ever he is or lives and comes down to a victim's job with a knife hidden, calls her on the job and asks her to come outside to talk, and then slashes her throat when she turns around to walk off is not a crime of passion; seems a lot of thought went into that? No passion there!

Cummings also made the point that “stalking is a serious crime, everywhere in the world but T&T!” and took aim at “the lackluster response of law enforcement and the criminal justice system”.

Most netizens agree that while gender-based violence may be a complex issue, immediate solutions include enforcing the law and doing more to protect victims. At present, the inverse seems to be happening, prompting activist Brendon O'Brien to sum up the situation on Instagram in a poem he wrote in honour of Samantha Isaacs: 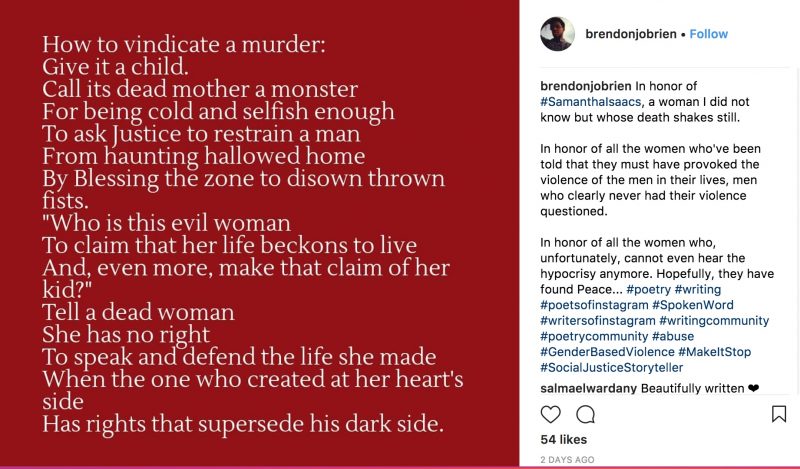 Victims of domestic and gender-based violence in Trinidad and Tobago can contact the following organisations for advice and support: