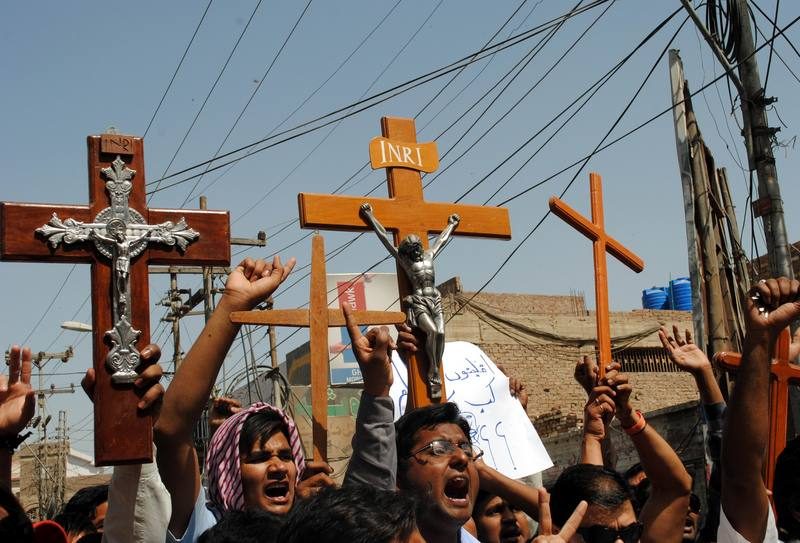 Pakistan's Christian minority protest against an attack on their community members in Lahore in 2013. Image by Rajput Yasir. Copyright Demotix (10/3/2013)

On Sunday, December 17, 2017, a bomb went off at the gates of the Bethel Memorial Methodist Church in Quetta, Pakistan. The bombing occurred while worshippers were attending service, leaving nine dead and more than 50 injured.

According to media reports, one of the two attackers attempting to go in the front entrance was shot dead by the police force before he could enter the church's premises. Two other attackers who attempted to enter through the back gates are still missing as the police continue the search operation. The attack occurred nearly a week before Christmas and has shaken the minority Christian community in Pakistan. ISIS has claimed responsibility for the attack.

People took to social media, condemning the attack and showing solidarity with the families of the deceased and injured. Netizen Dua Fatima Khan condemned the attack on Twitter:

I strongly condemn the terrorist attack in #Quetta. My thoughts are with the families of the deceased and prayers with the injured. #Pakistan

Heartfelt prayers and condolences for the families of all those who were killed in an attack on a church in Quetta.

A truly low point for a society when its mosques, churches, imambarghas or temples need security.

In response to these terrorist attacks, people once again began voicing their support for the implementation of the National Action Plan(NAP), a plan put forward to combat terrorism in 2015. This plan was put into action after the tragic incident which occurred at the Army Public School in Peshawar, Pakistan, that led to the death of 149 people, most of whom were children.

Filmmaker Rehan Khan took to Twitter to criticise the government:

Another attack. Another thread of condemnation. No sign of the National Action Plan #Quetta
No let up in terrorist attacks.
Sincere condolences to those who have lost their loved ones.

#Quetta Enemies of Pakistan & Humanity attack anything they can, schools, markets, hotels, mosques, shrines & churches! Prayers for the departed souls & my one question to Govt is: Security forces alone cant eliminate terrorism, WHEN WILL YOU IMPLEMENT NATIONAL ACTION PLAN?

Freelance journalist Syed Hussain tweeted a photo of clerics of all faiths showed solidarity to the Christian community:

#Christians and religious leaders from other faiths take part in a service for the victims of a suicide attack on a church in Quetta at the Sacred Heart Cathedral #LAHOREpic.twitter.com/ZtdqvfzYPF

Protection of minorities in Pakistan

Christians make up approximately 1.6 percent of Pakistan's 200 million and have faced discrimination for the past several years. One of Punjab's deadliest attacks occurred in Lahore during Easter in 2016 and resulted in the deaths of over 70 people, including several children.

I woke up to images of young children killed in #Quetta only because they are Christian. Christians being targeted during Christmas is not new, yet the Islamic Government of Pakistan has no realistic security and protection plan for religious minorities.

Someone please help me explain how we are protecting our Christian brothers and sisters… pic.twitter.com/wMhkUsmr7l

The persecution of religious minorities is not new to Pakistan; since 2015, more than 200 people have been killed and more than 300 have been injured in such attacks.

Most recently, discrimination against minorities has also cropped up in government. Retired military captain Muhammad Safdar Awan, who is a current member of the National Assembly, demanded that the Physics Department at Quaid-e-Azam University, which was named after Nobel Laureate Dr. Adbus Salam, change its name. As Salam belongs to the Muslim minority Ahmadiyya community, the requested name change appeared to some as an act of discrimination against the group.

For minorities in Pakistan, the Quetta attack is another reminder that — until hatred and religious intolerance are tackled — they will not be able to practice their basic right to worship freely, without the fear of being killed.