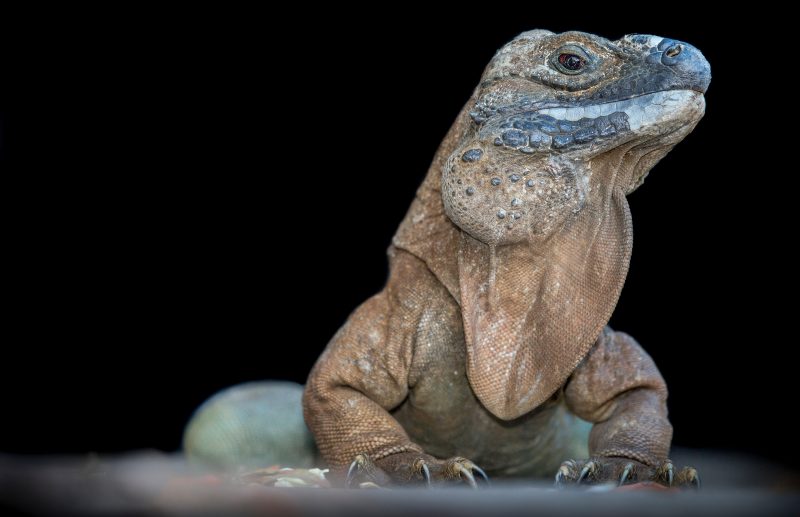 The Jamaican government’s decision to create a wildlife sanctuary in an area once threatened by a megaport development has brought joy to the hearts of environmentalists, who campaigned for years to “Save Goat Islands.” While there are questions over how the sanctuary might work in practice, for the most part the proposal is being seen as an early Christmas present.

The wildlife sanctuary is intended to protect the critically endangered Jamaican Iguana (Cyclura Collei), which had been thought extinct but was accidentally rediscovered in the Portland Bight Protected Area's Hellshire Hills in 1990. The animal is the subject of the Head Start program at Kingston's Hope Zoo, which rears the animals in captivity and releases them into their natural habitat once they are old enough to deal with any possible predators.

Local campaigners — and the overseas conservation organisations that supported them — had exhaled back in September 2016, when Prime Minister Andrew Holness announced that he had decided not to proceed with plans for a proposed Chinese transshipment port.

The Jamaica Environment Trust tweeted that Jamaican Iguanas were now celebrating in the area where they have been released into the wild:

Great News in Jamaica! Goat Islands in the Portland Bight Protected Area (PBPA) has been established as a wildlife sanctuary for endemic and endangered species, including the critically endangered endemic Jamaican #Iguana. via @jamaicaobserver https://t.co/E3qBGJoXUX @iguanafndn pic.twitter.com/90xWUTmZyZ

The Fort Worth, Texas-based International Iguana Foundation shared on Facebook:

ITS OFFICIAL!! the Goat Islands will finally be designated a wildlife sanctuary that will include the Jamaican Iguana as its flagship species. This has been our ‘end game’ for many years but that dream almost vanished in 2013 when the area was on the verge of being handed over to Chinese interests for development. The IIF and our partners launched an opposition campaign that successfully fought this idea for 3 years until the Jamaican government finally bowed to public pressure. We want to thank our many supporters who helped fund this campaign that kept the pressure up to Save The Goat Islands and the Jamaican Iguana. Victories in the conservation world and few and far between these days, and this one is particularly sweet. From all of us at the IIF, we hope you will join us in celebrating this hard fought success.

High-profile environmentalist Diana McCaulay had led the Goat Islands campaign with her team at the Jamaica Environment Trust (JET), advocating tirelessly against a transshipment port in the already protected wetlands and islands on Jamaica’s south coast. The group gained supporters at home and abroad in what became a classic example of environment versus development. The two islands are part of the Portland Bight Protected Area (PBPA), which includes two-thirds of Jamaica’s mangroves and a large area of dry limestone forest — both vulnerable habitats that are home to many endangered and endemic species. The PBPA is managed by another environmental NGO, the Caribbean Coastal Area Management Foundation (C-CAM). 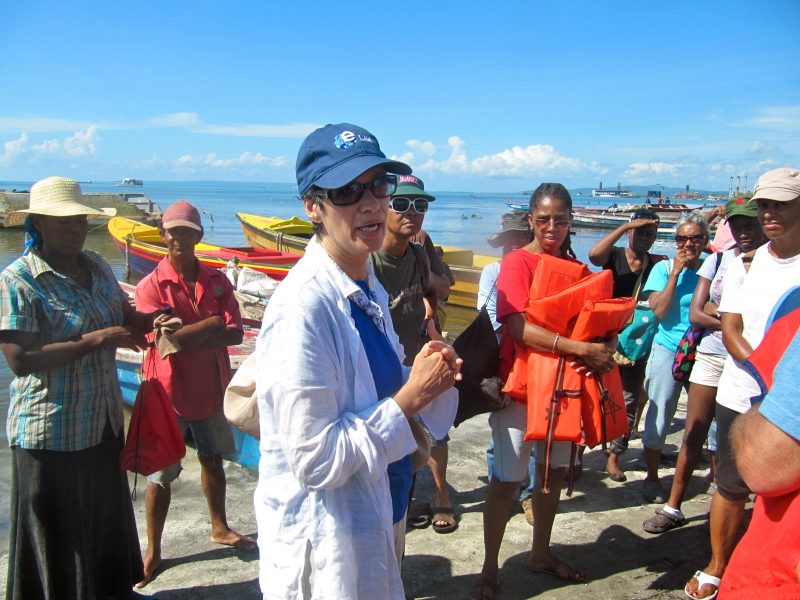 Jamaican environmentalist Diana McCaulay (in the blue baseball cap), talking to conservationists and supporters on Old Harbour Bay fishing beach, near Goat Islands, at the height of the campaign — in September, 2013 — to save the area. Photo by Emma Lewis, used with permission.

The announcement would have been especially gratifying for McCaulay, who will retire at the end of 2017 as the CEO of JET, which she founded 25 years ago. Many Jamaicans have praised her determination and successes as an environmental activist:

#Winning @dmccaulay. Take a bow because you fought hard for these. Respect due to the #GOJ for listening & doing the right thing. Protect our #Environment #Jamaica https://t.co/q4mIzq2Z9L

Mary Veira, who focuses on environmental concerns in the tourist resort of Negril, commented:

I owe much of the awareness of my environment and the importance of protecting to her, to this lady – Diana McCaulay.
Great Jamaican woman.

McCaulay recently delivered a high-profile lecture on “The State of The Rock” in the Caribbean International Network (CIN) Lecture Series at the Schomburg Center in New York. As the first woman to speak in the series, she made a passionate plea for the Caribbean environment and stressed the existential threat of climate change to the region.

Accomplishments aside, some questions are being asked about the designation of a “wildlife sanctuary” and whether the iguanas might swim from the islands to shore. Conservationist Wendy Lee asked:

I am happy for any positive news on the environment, but aren't the Goat Islands already supposed to be protected as part of the Portland Bight Protected Area and proposed Biosphere Reserve?

I am not sure under what act the Wildlife sanctuary was declared however this is what we want. Portland Bight Protected Area was submitted for Biosphere status and was withdrawn by the government. We are hoping to resubmit in 2018. Positive environmental news. A victory for Jamaica. Now lets implement plans to establish. On to the next threatened area???.

So what are the next steps for the proposed wildlife sanctuary? Diana McCaulay observed:

An assessment of what's on Goat Islands now will have to be done, especially of any invasive species. Also an assessment of the habitat – and then a decision taken about what can go there. Iguanas and likely other reptiles https://t.co/mrq9QYwgqB

So will there be a transshipment port somewhere else on the island? Last year, the prime minister suggested that there might be another location, but there has been no confirmation of this, so far.