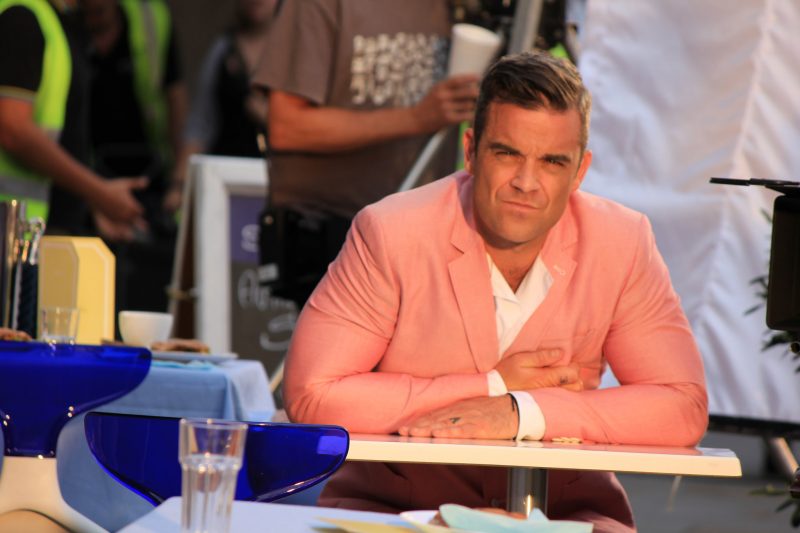 British pop singer Robbie Williams has sparked online rage in Uzbekistan by pointing at his bottom during a concert in the capital, Tashkent.

Those unfazed by the singer’s mildly saucy gesture, meanwhile, are bristling with irritation at the cost of tickets for the December 15 show.

Williams’ performance, which was organized by Uzbek-Russian billionaire and co-owner of London football club Alisher Usmanov, was a rare event for Uzbekistan. Prominent Western artists rarely make it to Uzbekistan, and those that have gone there in the past have done so at a cost to their reputation. This show was seemingly intended to demonstrate how the country is opening up since the death last year of dour authoritarian President Islam Karimov.

Williams began his concert by emerging onto the stage in an Uzbek-style khalat, or robe, and briefly introducing himself to the crowd in his characteristically irreverent manner.

“This is my band,” he said, pointing to the back of the stage.

“[And] this is my arse,” he added, turning around and throwing up his robe to expose his underwear. “Tonight your arse is mine,” he summed up, eliciting a volley of confused shrieks and laughter.

In the English provinces, from whence Williams hails, the act of flashing one’s buttocks in public is accepted — not to say encouraged — in a spirit of Hogarthian exuberance, but the stunt has gone down poorly in chaste Uzbekistan.

“We need to filter out Western culture, if you can even call this culture!” fumed Saiyora Hodjayeva.

Mukimjon Halmatov went further and suggested that the concert has left Uzbekistan prone to a wave of potential destruction that he likened to an onslaught of disease and terrorism.

“Some people bring in the swine illnesses [sic], some people bring AIDS or even the sickness that is [the Islamic State]. They now want to infect Uzbekistan with the disease of democracy. Evidently that is what Robbie was brought here for,” Halmatov wrote, without any apparent irony.

While these might be extreme and colorful positions to take, it is clear that Williams badly misjudged his antics and failed to do even basic homework.

Uzbekistan is a broadly conservative society and the authorities have occasionally sought drive this point home with broadsides against the perceived ills of imports like hip-hop. And some prominent local performers have fallen foul of morality monitors with output deemed excessively sexual in content.

“It is odd that the singer would come out on stage in a robe while not wearing trousers,” Shaikhov wrote. “He showed lack of respect to our culture by lifting his robe and revealing his rear parts to the people sitting in the audience. What is this, a sign of his education? Is this what you call respect for the Uzbek people?”

Still, it was hardly as if the average Uzbek could even have afforded to get to attend the concert anyway. Tickets were selling in the eye-watering, for Uzbekistan, range of $190 to $225. Official average monthly salaries in Uzbekistan are around $125.

For all that, the concert hall was completely packed.

Despite the vocal grumbling over the bottom-flashing, Williams’ fans came to his defense. It was the ticket prices that annoyed them.

Zarina Ubaidullayeva, a Tashkent resident and an admirer of the British performer, said that the furor was quite overblown.

“It was just a joke. It isn’t like he ran around naked onstage. There is no call for judging him so harshly,” Ubaidullayeva told EurasiaNet.org. “But then there was the other matter of the expensive tickets, which meant that I couldn’t afford to go to the concert. Since Usmanov was sponsoring this, then could have made entry free or at least set symbolic prices.”