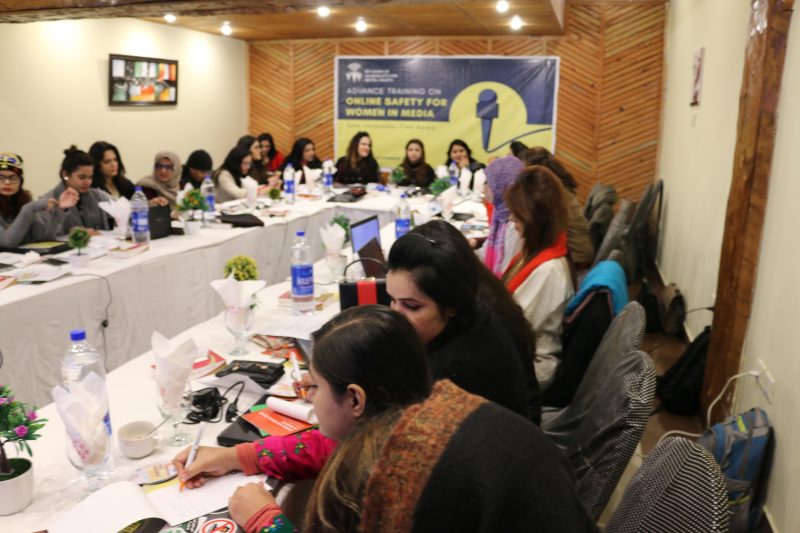 Women gather at DRF's Advanced Training for Online Safety for Women in Media. Photo by DRF, used with permission.

Last week, Digital Rights Foundation, a not-for-profit working on digital rights in Pakistan, launched the “Network for Journalists for Digital Rights.” The network seeks to help journalists keep safe while working online by providing them with resources and training.

The network is seeking news members in order to ensure that reporters across the country are thinking of their digital security and are empowered with tools to help them to do their work more securely.

The network launched with a two-day digital security training attended by more than two dozen women journalists from across the country. Pakistan ranks 147 out of 180 in the world rankings of Reporters Without Borders’ 2016 World Press Freedom Index. “Journalists are targeted by extremist groups, Islamist organizations, and Pakistan’s feared intelligence organizations,” stated the RSF.

The safety issues faced by women journalists range from harassment in workplace to threats and intimidation in retaliation for their reporting. Last year, at a consultative dialogue on Safety Challenges for Female Media Professionals, reporters spoke about the lack of mechanisms in place to help with instances of sexual harassment at workplace. Meeting leaders urged media organizations to have an established code of conduct to deal with issues of harassment with media houses and to implement these guidelines immediately.

The network hopes to empower journalists to practice and promote online safety within media houses and to raise awareness regarding digital rights issues in mainstream media.

DRF now regularly publish reports about the nature and degree of online harassment in Pakistan, based on the findings of the hotline staff:

According to our findings in the first four months of its operation the helpline received 513 individual complaints. The total number of calls were 535, with 406 of them being individual cases. 62% of the calls were made by women, whereas 37% of the callers were men. The platform where people face the most harassment was found to be Facebook and most of the complaints were regarding fake profiles, non-consensual use of information, blackmailing, unsolicited messages and hacked accounts or devices. Majority of the cases received by the Helpline were from Punjab (41.3%) whereas 23.90% individuals did not disclose their location. The helpline also got calls from Sindh (17.8%), Khyber Pakhtunkhwa (4.70%), Balochistan (1.30%), Azad Kashmir (0.70%), Federal Territory (10.10%) and outside Pakistan (0.20%).

The cases reported to the helpline are filed with Federal Investigation Authority (FIA), the government authority responsible for dealing with cyber crimes.

Although Pakistan's Cyber Crime Law addresses online harassment, digital rights organizations argue that these laws are being used against activists, bloggers, and journalists using online spaces for commenting against the state and security agencies.

Despite the odds, the network has raised news hopes that by bringing journalists together and raising their awareness of these issues, they can help each other to stay secure online, fight online harassment and effectively report on issues of online safety.

Author Anushe Noor Faheem participated in the launch meeting of the network.