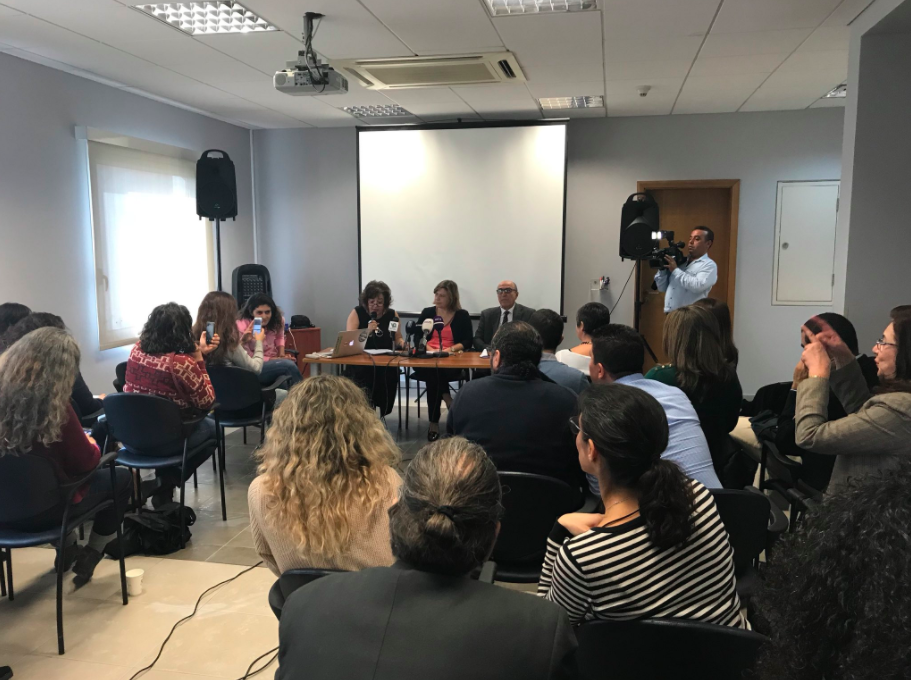 Photo of the press conference announcing the launch of the Waste Management Coalition on December 14, 2017. Photo by Bassam Khawaja, used with permission.

Just over two years after the country was halted by an uncontrolled waste crisis, a new waste management coalition has been announced in Lebanon which aims to pressure the government to find sustainable solutions for the still unsolved trash problem. The coalition, which will go by the simple name, ‘Waste Management Coalition’, consists of multiple environmental organizations and civil society groups, according to the Francophone daily L'Orient-Le-Jour. 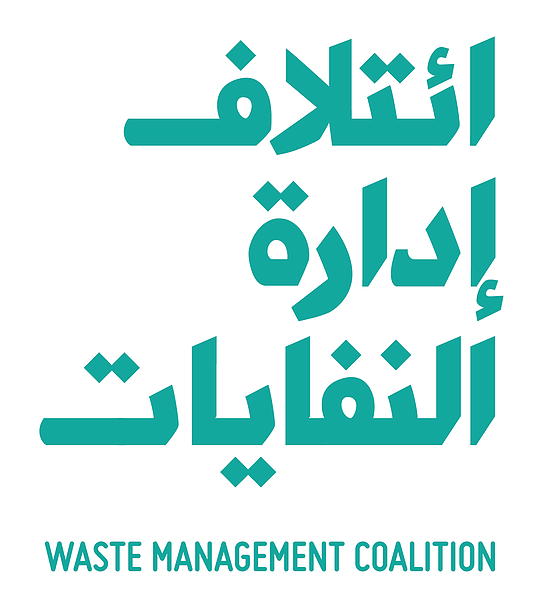 Also joining the coalition is the ‘You Stink’ Movement, a loosely organized protest movement that started in 2015 in response to the government's inability to replace the Naameh landfill that received waste from Beirut and the Mount Lebanon's region (an area where roughly half of the Lebanese population resides).

The announcement was made during a press conference at Greenpeace's Beirut headquarters at the same time the government was debating and postponing the decision to expand the two coastal landfills in the Costa Brava and Borj Hammoud areas that were part of the authorities’ short-term emergency plan to deal with this crisis in March 2016.

The report, released on December 1, focused on the health effects from the burning of open dumpsites that have proliferated since the waste crisis. This type of open waste burning is linked to severe impacts on human health, from heart conditions and cancer to skin diseases, asthma, and other respiratory illnesses.

The coalition's main objective is to pressure the authorities responsible for solid waste management in Lebanon to produce and apply a sustainable strategy that relies on integrated solid waste management. The group is demanding that the government implement the reduction of waste generation at the source, the reuse and recycling of waste and finally disposal using the appropriate techniques that comply with national and international environmental regulations.

Press conference at Berytech: @BeirutMadinati launches with other groups a Waste Management Coalition to advocate for viable solutions. Amazing when citizens are so competent and their rulers not! pic.twitter.com/LQ8ZLY0VOY

Soulaïma Chamat, a professor at the faculty of medicine at the public Lebanese University, asserted during the press conference that the coalition will use all its available means to pressure the government and concerned administrations to adopt and implement an efficient strategy for waste management, insisting on the negative effects this crisis has on public health and on the importance of raising awareness in the future work of the coalition.

Despite numerous warnings, the Lebanese government is still in denial about the possibility of a new trash crisis. With the Minister of Environment recently denying the existence of such a trash crisis, stating that people should not be alarmed as trash would not come back to the streets.

The activist group ‘Megaphone’ released a photo of the Minister's quote in English and Arabic with the caption: 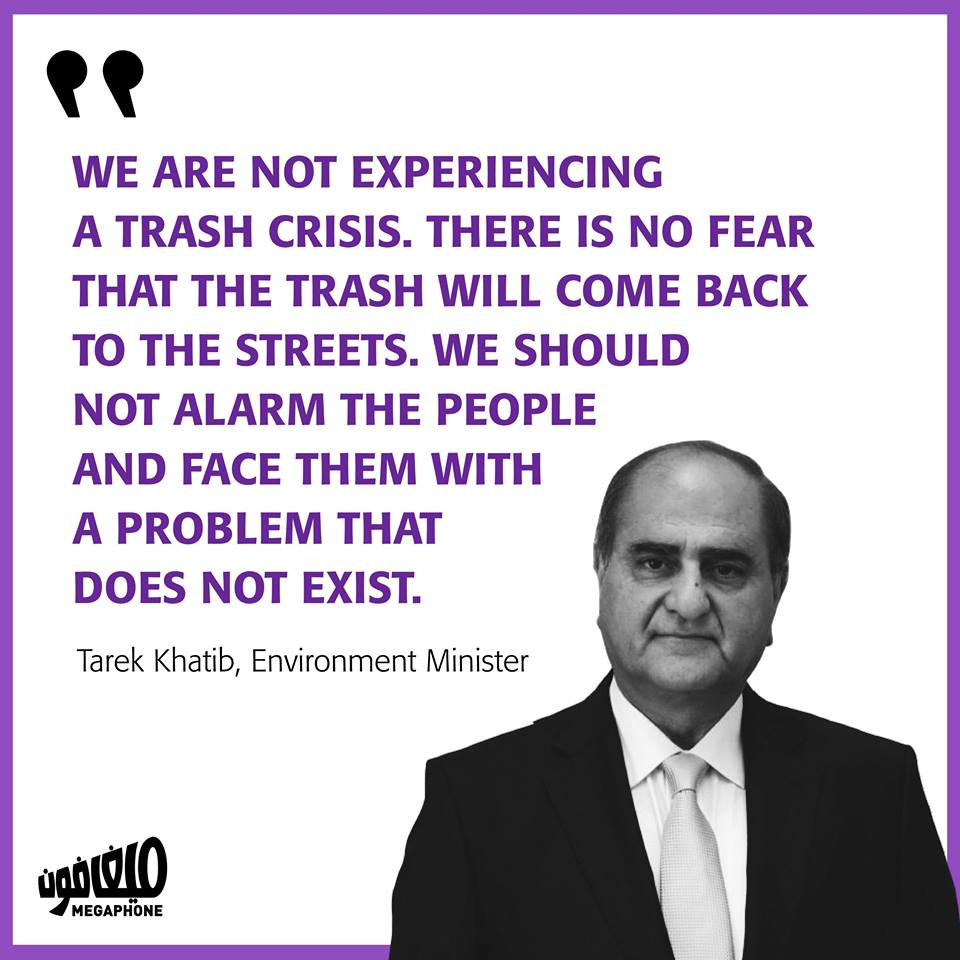 The Minister's quote published by ‘Megaphone’ on their Facebook Page on December 10, 2017. Used with permission.

Speaking to Global Voices, Bassam Khawaja, Lebanese researcher at Human Rights Watch said that “the government should listen to what this coalition and the Lebanese people are saying,” adding that:

They want a long term sustainable waste management solution that respects people’s right to health and a safe environment—not more short term emergency plans that leave most of Lebanon littered with burning piles of garbage.

Hanadi Nasser, an activist with the ‘You Stink’ movement, explained to Global Voices why the planned incinerators are not the way to go:

The [planned] incinerators will jeopardise people's lives with their toxic ashes and its not clear what they're going to do about them and where they are planning to get rid of them. You Stink wants to be part of the coalition to pressure the government and the municipalities to work on our demands and to establish sustainable environmental solutions based on recycling, and reducing waste.

As for Greenpeace, this was their statement to Global Voices:

Greenpeace Arab World and all members of the WMC hope that by mobilising enough people power and by using all available tools such as legal actions, peaceful protest, awareness campaigns and on-ground initiatives, enough pressure will be applied on the authorities leaving them no choice but to back down from their current and planned activities (coastal dumps, incinerators…) which are nothing less than an ecocide.

According to their website, the coalition's objectives are divided into four main categories.

First, on the technical level, the coalition wants to put up a fight against the incinerator proposal and the open burning currently taking place, pressuring the government to instead adopt a strategy of waste reduction at the source.

Second, on the legislative level, the aim is to pressure the government to abide by and enforce the international environmental conventions it is part of and punish any violations.

Third, on the management level, the coalition seeks to return the waste management file to the Ministry of Environment, which will prepare a comprehensive vision, policy, projects and long and medium term plan in all matters related to the environment, including a proposal for implementation steps and a plan to monitor the implementation based on a participatory approach.

And lastly, on the social development level, they wish to continue awareness campaigns to promote the basic principles of reduce, reuse and recycle.

Finding a solution for Lebanon’s trash problem is getting urgent once again as the two temporary landfills of Bourj Hammoud and Costa Brava are due to reach capacity in 2018, and the added pressure of the Waste Management Coalition might put this into gear.