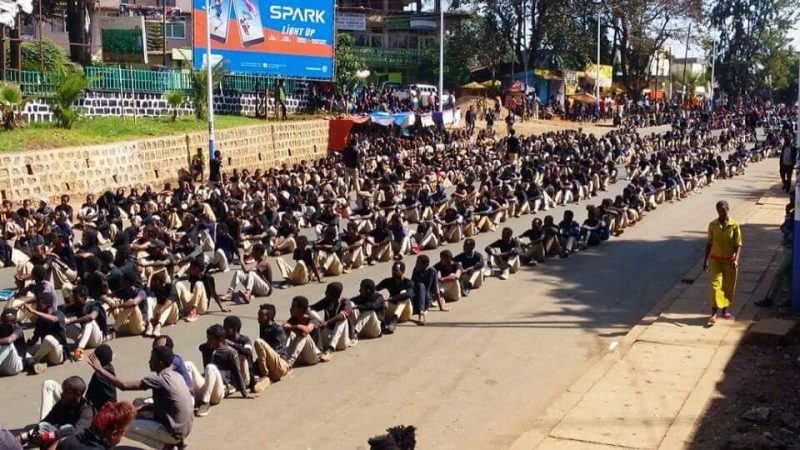 Students in Nekemte, a town in Western Ethiopian mourning for people killed in Chelenko, used by permission

At least 15 people were killed on December 11, 2017, when members of the Ethiopian Defense Force fired on peaceful protesters. The demonstration was prompted by the killing of an individual by members of security forces of Ethiopia’s Somali Region, in the latest chapter of a longstanding border dispute between Ethiopia’s two largest states — Oromia and Ethiopian Somali in Eastern Ethiopia.

According to reports from local authorities, one person died after being transferred to the hospital following the attack, and more than 12 were injured in the violence which began in Chelenko, a district town in eastern Oromia:

As journalists managed to get more details, this news from the BBC Afaan Oromoo says five people of the same family were among the #Chelenko victims in east Hararghe of #Oromia region who were shot dead by members of the national defense forces on Monday https://t.co/2kP7K7UdDL pic.twitter.com/cvfhWSoKgM

Some suggested that the statement is merely a symbolic initiative. Others considered it as a signal of the power struggle raging within the multi-ethnic governing coalition, the EPRDF, which comprises four ethnic-based parties: the Tigrayan People Liberation Front (TPLF), the Oromo People Democratic Organization (OPDO), the Amhara National Democratic Movement (ANDM) and the Southern Ethiopian People's Democratic Movement (SEPDM):

TPLF's sham coalition EPRDF in disarray—OPDO walked out of the CC meeting, ANDM also followed today. This TPLF machination has certainly run out of steam. TPLF must go! The country needs orderly transition before it's too late. #OromoProtests #OromoRevolution #Ethiopia

The power struggle involving the four EPRDF parties has been simmering since last summer. The row between the Oromo People's Democratic Organization (OPDO) and the Tigrayan People's Liberation Front (TPLF), was exposed when Abdula, the speaker of the Ethiopian Parliament and a prominent member of the OPDO, resigned from his position in October:

The TPLF apartheid like regime propagandist redefines the English definition of a ‘minority’. To misquote the famous saying, “two things are infinite: the universe and TPLF'S stupidity; and I'm not sure about the universe.” pic.twitter.com/fVSJNzZoo6

Power is heavily concentrated among members of the TPLF. However, there is some fear that if the OPDO continues down this road, it will be looking to defend itself using weapons, which could plunge Ethiopia into a civil war that will make the current conflict seem like just fisticuffs:

#Ethiopia‘s TPLF leadership should seriously consider requesting US Government mediation to organize a conference among all parties that will produce new democratic dispensation – before law and order collapse completely.

Despite the fact that the Oromo and Somali people who live along the border of Oromia and the Ethiopian Somali regions share close familial, religious and cultural ties, tensions are high along most of the disputed 1,000 km border. A brutal crackdown on the Oromo community living in Ethiopia’s Somali region has triggered a massive humanitarian catastrophe in eastern Ethiopia. By now, roughly 50,000 Oromos have fled into Ethiopia’s historical town, Harar, since last August.

Protests raged elsewhere in Ethiopia as well. A clash between followers of two football clubs from Ethiopia's northern states, Amhara and Tigray, led to the death of a football fan from Tigray, which in turn caused episodes of violence in three universities located in the Amhara, Oromia and Tigray regional states. Last week saw one particularly violent night at Adigrat University (situated in the Tigray region), where a student from the Amhara region was killed. Gruesome images of the victim subsequently went viral on social media:

Political uncertainty in #Ethiopia as fresh #OromoProtests spread in response to state-sponsored killings of civilians in Oromia and student clashes in parts of the Amhara state. https://t.co/bW7DRGh9aX

In what appears to be reprisals, two students from Tigray were reportedly killed at Welega University, located in the Oromia region. The number of incidents and casualties, as well as the number of people involved and the ethnic tone of the conflict over the past few days, has raised the prospect of even greater violence in Ethiopia, according to analysts. The Ethiopian government grudgingly characterizes the recent unrest as ethnic conflict, but also points the finger at diaspora-based activists and social media. However, opposition groups argue that Tigrayan politicians instigated the violence as a tool to maintain the status quo:

Commenting on the recent clashes inside univ. campuses he said they were different from previous demands of univ students that were attended to by the gov. The recent clashes have taken a clear ethnic dynamics & have resulted in the killings of students, Dr. Negeri further said. pic.twitter.com/GCtAeQiNJs

On December 13, mobile internet services and social media services were cut off in most parts of the country in an attempt to avert the deepening crisis.