Twitter Japan is Not a Safe Space for Minority Users 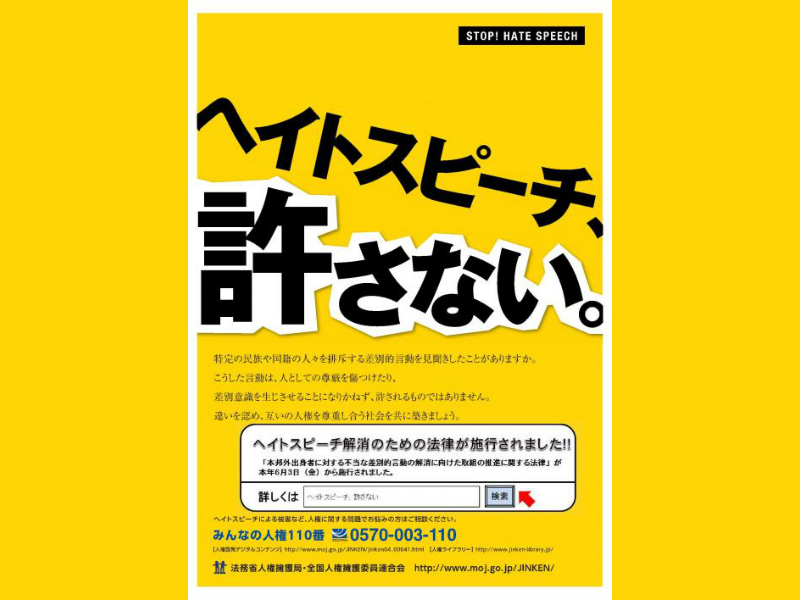 The absence of measures to control online hate speech discourages freedom of expression among ethnic minorities in Japan, especially resident Koreans, according to a series of reports published by Kanagawa Shimbun, a regional newspaper. The report details how online hate speech makes non-Japanese residents in the country uncomfortable online.

While various city, regional and national efforts have been made to address hate speech, Twitter Japan has been slow to respond, prompting demonstrators to gather on September 8 in front of Twitter's head office in Japan, asking for stronger measures against hate speech on the popular social media platform.

Kanagawa Shimbun, which serves the city of Yokohama and the rest of Kanagawa, Japan's second-most populated prefecture beside neighboring Tokyo, has been covering community efforts to fight against hate speech in the city of Kawasaki, which promotes multiculturalism with foreign residents accounting for 2% of its population.

In a December 1 article, Kanagawa Shimbun writes that while online hate speech in Japan targets almost anyone, it particularly impacts ethnic Koreans, and especially in real life. The article cites a survey showing a much higher ratio of survey takers of Korean origin refraining from internet usage for fear of seeing hateful comments.

Expressions of hate speech have stoked tensions between Japan and neighboring countries, leading to claims that Japan is not following its obligations under the UN's International Convention on the Elimination of All Forms of Racial Discrimination.

Most of whom (resident Koreans)were born and raised in Japan. Since they don’t have Japanese nationality, they are technically foreigners, though many have never stepped outside of Japan. The government has always insisted they can become Japanese nationals, and each year about 7,000 do, but in any case, many want to keep their Korean identity.

According to a 2017 Japanese government survey asking about the use of internet among foreigners, more than 40% of non-Japanese users in Japan have encountered xenophobic or discriminatory articles or online posts indicating the desire to evict foreign residents from Japan. Nearly 65% of them find online racism and xenophobia ‘unpleasant’, while nearly 20% of users said they have experiene of refraining from using the internet to avoid hateful content.

At a glance, out of internet using survey respondents, the percentage of those who came across discriminatory online articles and posts is 41.6%, but when you give a closer look, some areas are high in numbers. By nationality or territory, for survey respondents of Chinese origin the percentage of seeing such content becomes 47.6%,  67.7% among those of South Korean origin;  78.3% among those who identify as ethnic Koreans. Also, when you look at their types of residency, [the experience of seeing discriminatory content becomes much more common among longtime residents], it's 64.7% among special permanent residents of Japan,  71.6% among long-term residents who have been living in Japan “since birth”, and 58.9% among those who have been living [in the country] for “more than 40 years”.

Same can be said about refraining from using the Internet. While the ratio is 19.8% among survey respondents who encountered discriminatory content, if you break it down by nationality or territory, the ratio is  21.9% among those who identify as (Mainland) Chinese, 27.5% among those of Taiwan origin, 37% among those of South Korean origin and 47.8% among ethnic Koreans living in Japan. By residency type, it is 31.9% among permanent residents of Japan; 36% among respondents who reported living in Japan since birth.

The CEO of Twitter Japan seemed concerned about the hate speech on the platform but did not talk about taking an initiative as a company in a recent television interview:

Unfortunately, hate speech exists as part of our society. It actually exists. We cannot act like as if it does not exists. As such it exists, so it is up to the society to change, rather than wanting not to see them and keep the society from changing.

Kanagawa Shimbun published an online article denouncing these remarks and highlighted a third-generation Korean-Japanese mother who used to enjoy Twitter until she and her son became victims of multiple defamatory comments. The Yokohama District Legal Affair Burea eventually ordered them to be deleted but she felt forced to stop using Twitter, after continuous hateful comments.

“Reading the [Kanagawa Shimbun] article makes me feel weary. [Weary] of racists of course, but also [weary of] Twitter Japan responding this way.

In June 2016, the Japanese government enforced the Act on the Promotion of Efforts to Eliminate Unfair Discriminatory Speech and Behavior against Persons Originating from Outside Japan, after years of recieving recommendations to meet the UN Convention on the Elimination of All Forms of Racial Discrimination.

The law delegates local municipalities to implement measures to eliminate hate speech. The city of Kawasaki was one of Japan's first municipalities to compile guidelines aimed at preventing hate speech at public facilities operated by the city. However, when it comes to online hate speech, it is not clear to what extent government agencies have power.

Under the Act's supplementary resolution:

(iii) Measures shall be implemented relating to efforts towards the elimination of acts of encouraging or inducing unfair discriminatory speech and behavior against persons originating from a country or region other than Japan, etc. being committed through the Internet.

However, the law does not criminalize hate speech, and local municipalities claim they have little power or resources to address hateful online content.

While the Japanese government is also working on implementing an information technology strategy to match an already roaring digital civic sphere and make Japan “one of the world's most advanced IT nations”, so far little has been done to tackle online hate speech.

Will Twitter Japan do more to address online hate speech?

Japan is one the top five markets for Twitter in terms of active users, making the platform more popular than Facebook. Like in other countries, a lot of political discussion in Japan happens on Twitter, including the spread of misinformation, especially during elections.

Just like the recent accusations by female comedians against Facebook that they are silencing women while so many violent comments by men are left visible, some users in Japan speculate that Twitter Japan puts unfair pressure on progressive influencers, especially seeing racist trolls kept active, reminding users that Twitter is just another service of a private company rather than a public space for free speech.

Since October, Twitter headquarters in the USA has been working to update its rules for creating safer online spaces including measures to heighten transparency on political ads and provide clearer account suspension processes.

Twitter's global council of safety partners will implement these changes but Japan's partners are limited to suicide prevention organizations.

While this global council may be a good string behind Twitter Japan, the challenge for non-English speaking users in Japan is how these changes will come into effect at the local level.