Women line up to vote in Egypt's 2011 parliamentary elections. Photo posted by UN Women on December 2, 2011. Used under a Creative Commons license [1].

In 2015, Hala Yousef, the Minister of Population in Egypt, reported that [2] out of all marriages in Egypt, 15% are child marriages. Although the age of marriage increased to 18 in 2008, the practice continues to be a phenomenon across the country, and especially in poorer regions.

In addition to violating the rights of children, these practices often lead to direct violence on the children, who are almost always girls.

A 2001 study showed [3] that 29 percent of married children have been beaten by their husbands. In 2014, the American University of Cairo's Social Research Center found that [4] 27 percent of girls married before the age of 18 had been physically abused by their husbands.

Furthermore, in a report [5] from 2016, a UN panel concluded [6] that the persecution of well-known women human rights defenders contributes to Egypt's ongoing poor record on women's rights:

The continuous persecution of women human rights defenders such as Azza Soliman [7] and Mozn Hassan [8]… establishes and reinforces a pattern of systematic repression of the Egyptian women’s rights movement, aiming to silence and intimidate those working tirelessly for justice, human rights and equality.

To address these issues, Global Voices spoke to Samah Mansur, an Egyptian activist who has worked on women's rights for over 10 years. 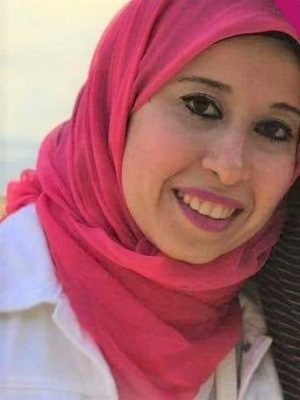 Mansur works as an officer of the gender and women's rights unit at the Appropriate Communication Techniques for Development Center [9] (ACT). She is a member of the “Say No To Child Trafficking” [10] Initiative, a group that works on monitoring and documenting child trafficking and child marriage in Egypt. Mansur also helped establish the “I Saw Harassment” [11]Initiative to raise awareness and combat harassment in Egypt.

In 2007, she was awarded a prize by the United Nations Development Fund for Women for her research on fighting violence against women.

Nevena Borisova (NB): How did you start working on women's rights?

Samah Mansur (SM): I’ve been fortunate to come from a family where volunteering is considered absolutely important. My parents believed that the best gift they could ever give me is to help people in need. I was allowed to spend copious amount of time at charities, and shelters to help orphans, battered women, and people in need, beyond what I was taught in school and so nurtured me into volunteer lover that I am today. Since 2003, I have been involved in the non-profit sector and I joined the Appropriate Communication Techniques for Development (ACT) which works on fighting all types of violence against women. I am lucky because I am able to choose what to do and I am absolutely passionate about everything I do.

NB: You are a member of the ‘Say No to Child Trafficking’ Initiative. What is the current extent of the problem in Egypt and what are the measures that must be taken?

SM: In Egypt, child marriage and child trafficking are a social phenomenon which primarily affects girls who live in extreme poverty in rural areas, and is becoming more prevalent in urban areas, as well as in Upper Egypt. Twelve percent of them are married before they turn eighteen. One major contributing factor is the wealthy men from Egypt, and the Arab region, including the Gulf Countries, who frequently visit Egypt to acquire “temporary marriages and tourism marriages” with underage girls. Girls below the age of fourteen are forced into marriage. These marriages are often facilitated by the girl’s parents and are arranged through marriage brokers, sheikhs, lawyers, community leaders, etc., who take bribes for registering these illegal marriages of underage girls. After a while, these girl brides are in very vulnerable positions. They are either left abandoned and pregnant, taken by force to serve as maids in faraway households, or in many cases subjected to abortions.

These marriages, considered a form of child trafficking and modern day slavery, force young brides to work as maids and servants in abusive settings where a monthly compensation is received and channeled by special brokers. The money goes to the girl’s unemployed male siblings and father.

NB: You helped establish the ‘I Saw Harassment’ initiative. Could you please say more about the harassment of women in Egypt?

SM: Sexual harassment is a major problem in Egypt. Studies [12] show that large majorities of women have been subjected to it, often on the street or public transportation. And the problem is deeply rooted. For this reason I participated in establishing the I Saw Harassment Initiative which works on monitoring and documenting sexual harassment crimes against women.

NB: What about women's career opportunities in the country?

SM: Egypt ranks low in gender equity. The 2015 Global Gender Gap Index, ranks Egypt at 136 out of 145 countries worldwide. Women have significantly lower participation in the labor force than men (26% vs 79%) and lower literacy (65% literacy for women vs 82% of males).