‘We Are One': Same Sex Marriage Becomes Legal Down Under 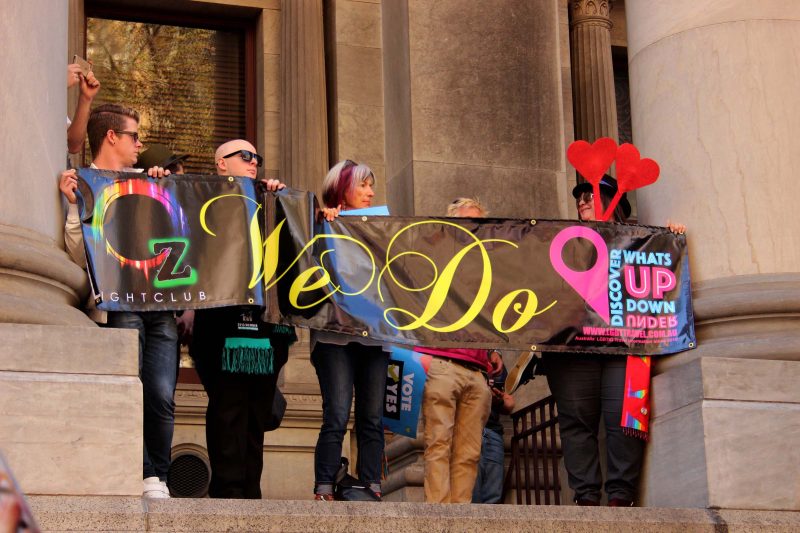 Same sex marriage has become legal in Australia. Foreign marriages are recognised down under immediately. The first ceremonies will commence on 9 January 2018.

Celebrations took place across the country, with the most prominent being in the House of Representatives with parliamentarians embracing one another in a unique display of non-partisan unity. The visitors’ gallery rejoiced by singing The Seekers’ iconic ‘I Am Australian’:

We are one, but we are many. And from all the lands on earth we come. We share a dream and sing with one voice: I am, you are, we are Australian.

The legislation followed a 62% vote in favor of legalizing same-sex marriage in a voluntary and non-binding postal survey conducted by the Federal government. The voter turnout was 80%.

Veteran journalist David Marr watched the final vote at the Australian Broadcasting Corporation (ABC) TV program The Drum. Their video captured both his reaction and the scenes in parliament. It was retweeted and liked many thousands of times:

“I've managed to live long enough to see this unimaginable thing!” David Marr in tears on #TheDrum as #marriageequality passes the House of Representatives pic.twitter.com/HS6xuFr0Oz

When I was a young man people like me were sent to jail for having sex. And I've lived long enough to see the community welcome this unimaginable thing of saying we can now marry. That's a journey!

I proposed to my beautiful gorgeous partner of 11 years 2 nights ago, minutes after the Marriage Act passed in parliament. 45 & the fight is finally over. My heart is at peace. ?❤️ #marriageequality  #samesexmarriage #ssm @SenatorWong @MagdaSzubanski @equallovemelb pic.twitter.com/8w8oVVIa34

Well it’s been just over 12 hours since our marriage was made legal in this country. 27&1/2 years in the making, 8 married, and the world just goes on. #LoveIsLove Mind you, my husband didn’t like my expectations of being served breakfast in bed to celebrate. #marriageequality

Forecast for the weekend: rainbows and love ? #loveislove #marriageequality pic.twitter.com/VV15HJXZct

I've been asked why I'm thrilled for #MarriageEquality as a #StraightMan and #Christian. There's at least 6 LGBT weddings to attend! Howzat?

In a rare non-partisan moment, the political parties gave their members a free vote on the bill. Many government and opposition parliamentarians shared the love:

Only four members of the House of Representatives voted against the final bill:

This says everything #marriageequality pic.twitter.com/C4LQm02WAq

A further nine Members of House of Representatives, including former prime minister Tony Abbott, abstained in his absence from the chamber during the division. Many tweeters expressed their contempt:

I have more respect for the misguided minority who voted against #MarriageEquality than the low lifes who abstained.

Prime Minister Malcolm Turnbull gushed about the victory but many disputed his attempt to claim it as his own citing the divisive and contentious postal survey:

This made me laugh so hard #marriageequality pic.twitter.com/9drAT3EQCk

Just about extinguishes the last of any respect I had for this PM. Your path to this moment cast shadows of hate, division & general nastiness across our country. To claim credit for #MarriageEquality now is @realDonaldTrump level politics. Hmm … sad indeed. #auspolِ https://t.co/uroxogOpdA

Today we have raised the rainbow flag over the British High Commission in Canberra to celebrate with Australia in this historic moment ? The Australian Parliament has voted to change the Marriage Act to allow same-sex couples to marry #marriageequality? #loveislove #LoveisGREAT pic.twitter.com/Cg1Ny9u5A8

Today was a great day for Australia and for me. HE SAID YES! #MarriageEquality pic.twitter.com/liaXiw0FYh

There is so much darkness and fear in the world now but Australia legalising same sex marriage today should remind us that humanity can only survive when it learns to love one and other. #marriageequality

guys this is SUPER CUTE – registry offices in VIC and NSW have specially opened up this weekend for same-sex couples who want to register to get married, what bloody heroes #MarriageEquality https://t.co/KXJeLgaJRA