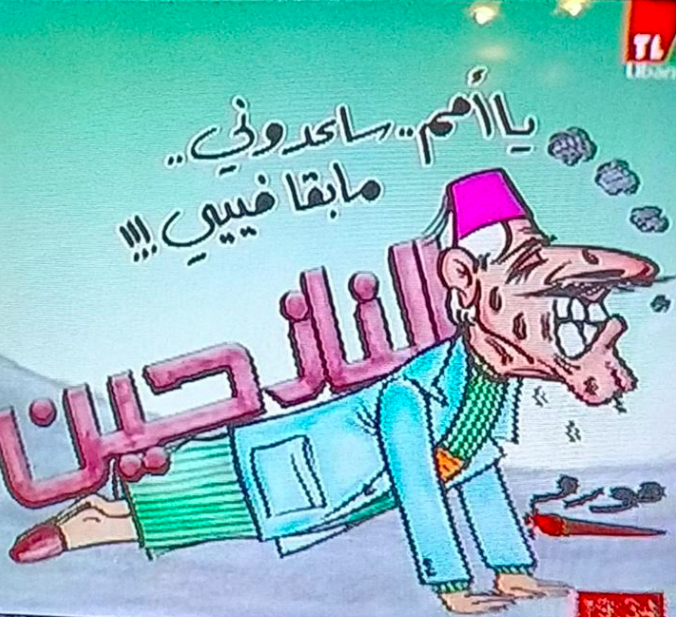 October 7, Lebanese State channel ‘Tele Liban’ shows an image of an old man depicting ‘the Lebanese’ being crushed by the word “Displaced.”

The latest figures by the UNHCR put the number of Syrian refugees fleeing the conflict at over 1,000,000 as of June of 2017. This is in addition to the approximately 450,000 Palestinian refugees, among those who have fled the 1948 Nakba (Catastrophe in Arabic), when over 700,000 Palestinians fled or were forced out of their homes as the State of Israel was created.

Participants including politicians, academics, and UN officials convened to discuss the legal and political context of refugees living in Lebanon, but rather than discuss ways of assisting refugees and their host communities, one attendee described to Global Voices how a number of politicians took the opportunity to smear refugees.

Alexandra Tohme, a research analyst and activist working in refugee camps in Akkar, North Lebanon, told Global Voices that former Lebanese Minister of Justice Chakib Cortbaoui said “refugees remain in Lebanon because they are receiving international aid,” insisting on this as a “fact” and he was just “telling the truth.”

Cortbaoui said that Lebanon should not repeat “the Palestinian precedent,” pitting Palestinians once again as scapegoats, which is not new to Lebanese politics.

Just this August, Lebanon's Foreign Minister Gebran Bassil, son-in-law of the current president Michel Aoun, posted an image on Instagram of the Ain al-Hilweh Palestinian refugee camp in the south of the country in the 60s. Accompanied with the image was Bassil's message to all Lebanese: ‘do not accept [refugee] camps’.

But Cortbaoui wasn't the only Lebanese official present at the talk repeating that line. Khalil Gebara, Advisor to the Ministry of Interior & Municipalities, also present, even said that Syrian refugees should no longer be considered refugees, but ‘economic migrants,’ as the Lebanese-Syrian borders “have been safe since 2015.”

Tohme tried to address some of the rhetoric put forward by officials. She mentioned a recent aid cut by the World Food Program's ‘Food Aid Program’ that will affect 20,000 vulnerable Syrian families as of November 2017 and the impact this has had on them.

The families I know affected by this decision are extremely vulnerable: the conditions of their tents (“Informal Tented Settlements or ITS) are extremely dire: unsanitary conditions, very desperate, living in danger and fear, no work, no movement or access outside to hospitals, work, school, the children have been out of education for three to four years, no healthcare but a visit by a doctor once a month.

Tohme then used this fact to directly respond to Cortbaoui's claim and asked:

How can one claim that these people are here to receive aid from international organizations, when many are, in fact, not receiving any?

Rebel-held Eastern Ghouta has been besieged by government forces since 2013. The latest rounds of violence since November 2017 have left at least 200 people killed, including 47 children, according to the Syrian Observatory for Human Rights.

This then lead Tohme to respond to Gebara's claim that the border areas in Syria have been safe since 2015 with examples of severe violence in Hama, Homs, Damascus and Dera'a, all within reasonable distance to the Lebanese borders.

Convenient scapegoating in the media

The representation of refugees in Lebanese media could best be summed up by the cartoon on Lebanon's state television channel ‘Tele Liban’ (the top feature image).

An old man in traditional clothes wearing a ‘Tarboush’ (traditional Ottoman-era hat equivalent to the Moroccan Fez) is being crushed by the word ‘displaced’ (النازحين), as opposed to using the word ‘refugees’ (اللاجئين). Over the man is the message ‘help me… I can't take it anymore!!!’.

Ironically, the Tarboush would have been worn by today's Palestinians and Syrians as well because the style predates the formation of nation states.

The Lebanese government has disallowed Syrians from registering as refugees since May 6, 2015. Bureaucratic demands such as paying the equivalent of $200 USD to pay for a residency yearly, as well as requiring Syrian documents. The Norwegian Refugee Council claims “up to 80% don’t have valid residency permits.”

Without a residence permit there is no sense of security. They risk fines, arrest, detention, and even potential departure orders. The fear of being arrested and detained forces many Syrian refugees to limit their movements and resort to negative coping mechanisms to survive.

Despite the verified facts of Syrian refugees’ struggles in Lebanon, official scapegoating, regularly aided by mainstream media outlets, have led to the spread of anti-refugee rhetoric across Lebanon and this tension has escalated over time.

The Party of Lebanon, a party that claims to rely on “the Lebanese youth,” organized a protest titled “The Popular Gathering To Demand the Displaced Syrians’ Return to their Country” in October 2017.

In some areas, this rhetoric transformed into action when municipalities ordered all Syrians with a warrant to leave, leading many to flee.