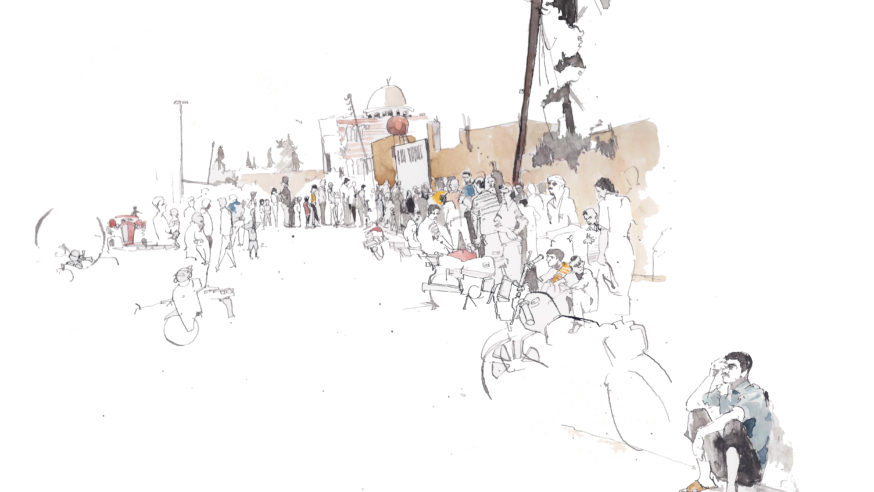 An illustration from ‘Syria: a bakery and a climbing frame tank’ – Azaz, August 2012 (George Butler/SyriaUntold)]

This is a story written for Syria Untold by Nathalie Rosa Bucher, a French-Germany writer currently based in Beirut. It was originally published on December 6 and is republished here as part of a partnership agreement. The following is a slightly shorter version of Bucher's original piece.

Inundated with photographic images on social media, illustrations have become a popular alternative used to raise awareness and tell stories. NGO's like SyriaUntold have been using illustrations and drawings specifically to capture and recount Syrian refugees’ lives with projects like Shadi Whose Mail was Too Late (June 2017).

Butler felt a strong sense of responsibility when working with ink pen, paper and water colors in Azaz near the Turkish border after the Free Syrian Army (FSA) had captured the town in 2012.

“I think one criticism of drawing or perhaps it is just me – is that it is easy to be biased in favor of the person you are sitting in front of. I like doing justice to the people sitting in front of me. In Azaz I felt like it was the least I could do. But I think the press significantly contributed to the idea that the opposition would overthrow the Assad regime (because they only had access to one side), whereas, in reality, the regime was never going to ‘lose’ without outside involvement.”

Back from Azaz, Butler started a small initiative with “Syrian Suppers” which gradually grew into the Hands Up Foundation.

“We have raised nearly £4 million,” Butler said. “The illustration just allowed me to sit in Syria long enough to be moved enough to react. And Hands Up is how we do that.”

The Syrian revolution witnessed a strong artistic output including the production of cartoons. Widad Al-Hamawi, whose name was changed for security reasons, and who is a member of the Comic4Syria collective, pointed out that the power of illustration lies in

“the colors, the emotions, the clarity of the event, the sense of bitter humor sometimes, tackling the subject from different points of view, catching a moment that cannot be photographed or was not photographed, but we know it happened. Illustration gives you more freedom to document events and feelings.”

“illustrations have the liberty of seeing the picture from any perspective you want, literally speaking. This helps the audience put themselves in the place of all characters. Illustrations magnify the truth, emotionally and graphically. Illustrations are about telling the truth through lies.”

While the collective stopped posting and publishing years ago, they were able to document moments of a very important part of history in their own way:

“We wait and wait for the time to come where we [will] be able to publish again.”

The latest drawing by Comic4Syria. It was published in an article (Arabic only) that explores the corruption surrounding “terrorism” charges in regime-controlled Syria – 4-12-2017 (Comic4Syria/SyriaUntold)

American illustrator Molly Crabapple's Scenes from Syria (2015) is the result of a remarkable collaboration undertaken clandestinely in 2013 between Crabapple in New York and Syrian journalist Marwan Hisham in his native Raqqa.

The duo later worked on Aleppo and Mosul and are putting together an 82-page memoir about their work forthcoming in 2018. “Our first collaboration was about Raqqa,” Hisham, now based in Turkey, recalled:

Molly, at the time a Twitter acquaintance, suggested if I can take photos that give an idea about the general life in the city under ISIS occupation. The idea, we both knew, was risky but was also very tempting. We agreed to make up to ten illustrations. Since it was my city, I knew exactly where to go, and in some cases, what to capture. We were in daily contact exchanging ideas. Molly ended up drawing all my photos of nine scenes. We had one thing in mind: Depicting civilian and human life in Raqqa and other cities away from the stereotype.

Crabapple's first and arguably most striking of the nine “Scenes from Daily Life in the De Facto Capital of ISIS” is her depiction of the historic Clock Tower, a well-known monument featuring a male and female peasant brandishing a torch with their heads chopped off.

Only one lone individual features in the background. The statue's base is painted black and covered in ISIS slogans. Its signature ink blotches are as foreboding as the riotous cloud hovering above the structure. Hisham recalls:

[…] the Clock Tower illustration from Raqqa, […] symbolized ISIS’ vandalization of the city. It was a magnificent start. It gave me an irresistible motive to help make more.

In the Raqqa project I shot short videos around some of the scenes I picked, to make it easier for her to see through my eyes. 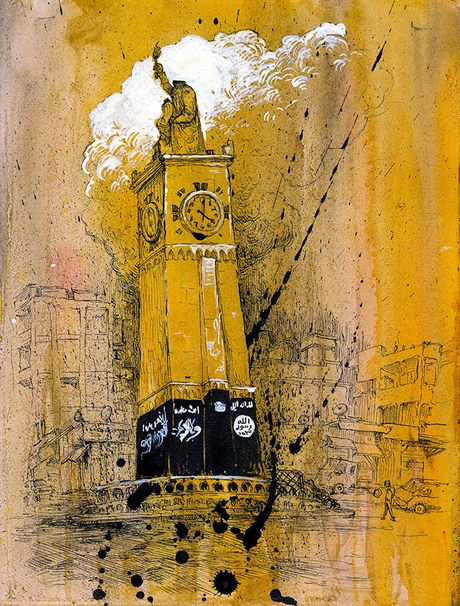 The Clock Tower – Scenes from Daily Life in the De-Facto Capital of ISIS (Molly Crabapple-Marwan Hisham/Fair use. All rights reserved to the author)

An ideal medium for new narratives

Iraqi journalist Ghaith Abdul-Ahad captures some of the hostile places he covered with his sketchbook not only to highlight untold stories but to heal from trauma. The trained architect is presently working on a book that will feature this body of work done in his home country Iraq, as well as Syria and Yemen.

For the past 30 years, political cartoonist Patrick Chappatte has built a parallel career as a graphic journalist, highlighting issues and individual stories that get overlooked by the media. His vast body of work includes stories of death row in the United States and an animation film about a cluster bomb in Lebanon (‘Lebanon: Death in the field’).

In the documentary ‘Plans-Fixes – Patrick Chappatte,’ he underlined that graphic journalism is an honest way of talking to readers and that the art form, which has developed and proliferated since the 90s, may well have done so, certainly in parts, due to the need of the media to renew itself.

contrary to a common prejudice, comics can help address serious, difficult issues. This form allows, if not requires, the reporter to be part of the story he tells, both as a narrator and a character.