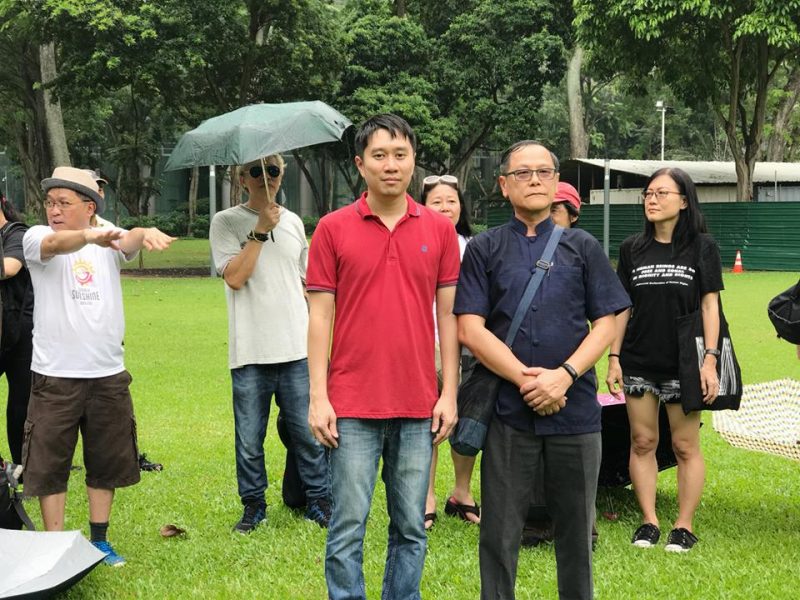 On November 29, Singaporean activist Jolovan Wham was charged by the police for “organizing public assemblies without a permit under the Public Order Act, an offense of vandalism under the Vandalism Act, and for refusing to sign his statements under the Penal Code.”

Wham is an activist known for his campaigns promoting the rights of migrant workers, free speech in Singapore, and reform of the country’s laws on detention and death penalty.

Wham’s seven offences listed by the police are in connection several protest events: 1. July 14 candle lighting vigil in solidarity with the family of a person facing the death penalty 2. June 13 ‘silent protest’ inside a train about the arrest of “Marxist conspirators’ in 1987 and 3. November 26, 2016 indoor forum whose speaker included Hong Kong pro-democracy activist Joshua Wong speaking via Skype.

The police accused Wham of organizing these activities without securing the approval of authorities and described Wham as a ‘recalcitrant’:

Wham is recalcitrant and has repeatedly shown blatant disregard for the law, especially with regard to organizing or participating in illegal public assemblies.

Wham was briefly detained on November 29 but released after posting bail.

His case alarmed many activist groups which warned about the shrinking space for freedom of expression in Singapore.

An online petition signed by more than 3,900 people (as of this writing) urged the government to drop the charges against Wham:

The prosecution of Jolovan Wham has a chilling effect on free speech where the law is used as a tool of intimidation against peaceful and non-violent activists. These charges also violate his constitutional and universal rights to freedom of expression and peaceful assembly.

Another online petition addressed to the country’s prime minister highlighted the importance of Wham’s activism:

Function 8, a non-government organization (NGO), praised Wham as “the voice of the voiceless.”

We do not understand why the State is pursuing the seven charges against Jolovan Wham for events which were all peaceful and non-violent. He works for the good of our country, which we are told, aims to be inclusive and which respects diverse voices.

The Singapore government has long used a range of public order offenses to manage public opinion. As a mature, advanced nation which exhibits the key forms of parliamentary democracy, the stifling of free speech has been widely condemned for its chilling effect on human rights.

The Singapore police should not proceed with charges against Wham. The government must reconsider its position on free speech and freedom of assembly. It is time for Singapore to recognize that peaceful protest is not a crime.

Some regulation of public assembly may be necessary to safeguard the public interest in safety and prevent disruption. Yet it may be timely to reconsider how restrictive these regulations should be. Events that do not threaten the safety and well-being of any person, damage any property or cause disruption to ordinary affairs should not be made difficult to organize, and it is doubtful whether society's interests are best served by making them liable to criminal prosecution.

MARUAH, another human rights group, insisted that Wham’s activism should not be treated by the police as a criminal act.

Mr Wham’s actions are merely public criticisms of the government’s stance on detention without trial, capital punishment and free speech. It is revealing that in the police press release announcing the arrest of Mr Wham, the police make a great deal of Mr Wham’s “recalcitrance” as if he were a child defying parental authority.

Wham’s supporters organized a solidarity event on December 10 in time for International Human Rights Day celebrations. Some of his friends also shared stories of how Wham inspired many people through his activism.

Wham also got the support of 52 Malaysian NGOs which signed a statement urging the Singapore government to withdraw the charges filed against him.

This ironic tweet featuring reflects the determination of Wham and his colleagues to question the legitimacy of being labeled ‘recalcitrant’:

“Wham is recalcitrant and has repeatedly shown blatant disregard for the law, especially with regard to organising or participating in illegal public assemblies,” the police said. pic.twitter.com/HdfB6hlais