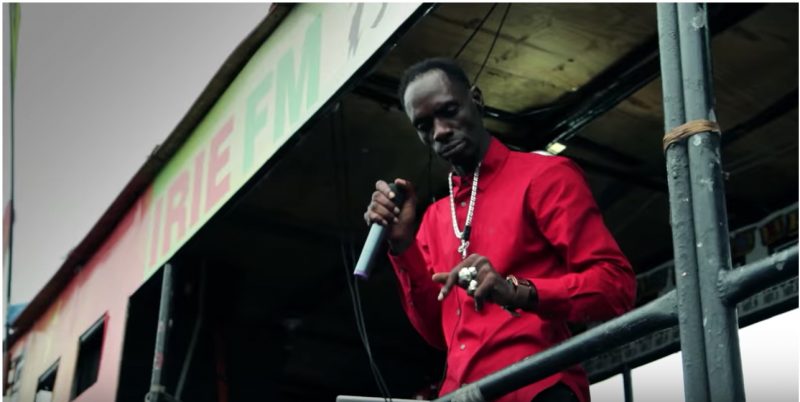 Screenshot from the YouTube video “Ninja Mi Ninja” by Ninjaman.

When, on November 21, 2017, dancehall deejay Desmond “Ninja Man” Ballentyne was found guilty of murder and shooting with intent, Jamaicans’ response was somewhat similar to that of the man himself: “Ah suh it guh, man.” (Translated from Patois: “That's the way things go, man.”)

The self-styled “Don Gorgon” — a name generally given to “community leaders” with the greatest firepower and influence, both literally and figuratively — seemed nonplussed. (The term applies to any community in which a person has standing, but is often used in the dancehall context.) Leaving court with his son and accomplice Denis Clayton, who were also found guilty of the 2009 murder of Ricardo Johnson (“Ricky Trooper”) in Kingston's Olympic Gardens, he reportedly added:

“Don't worry yourself, Jamaica, I'll be back,” says Ninja Man as he boards police vehicle to be taken from court to prison – @rmakyn photo pic.twitter.com/Q2xVV6dmAj

While much of the dancehall fraternity — at home and overseas — reacted with shock to the news, many Jamaicans, wearied by the relentlessly high murder rate on the island, seem to be hoping that the controversial artiste will not be back any time soon, suggesting that he had got what he deserved:

If u do the crime, then u must do the time.#NinjaMan

Fellow deejay Mr. Vegas observed that while Ballentyne is “one of the greatest on a musical level”, the kind of content he put out might have come back to haunt him. The artist was known for his controversial pro-gun lyrics.

Still, he had his supporters. Dancehall diva D'Angel posted on her Facebook page:

I Just visited with Ninja Man and I'm happy to share with his fans that he's doing great and holding on to faith? he's in high spirit as well? God is truly in control and he says he leaves everything in God hands… My prayers are with you my friend #stronger #Godadealwideverything

Ballentyne's case was hard fought, and not without drama. After seemingly endless delays (17 trial dates set and 23 mention dates in court) the judge denied yet another application for a postponement and ordered the trial to begin immediately.

However, mid-way through a witness’ testimony, Ballentyne complained suddenly of chest pains and was taken to hospital. The trial continued in his absence. It appeared that he had suffered a mild heart attack. The news caused panic, and rumours of his death circulated rapidly on social media, especially among dancehall fans in the diaspora:

#NinjaMan is not dead, despite rumors. His murder trial verdict is expected this week!

Then his fate was put to a seven-person jury. Radio journalist Abka Fitz-Henley tweeted:

UPDATE: the future of one dancehall music's finest lyrical sons, Desmond Ballentine o/c #NinjaMan, has been languishing in the hands of a 7 member jury for approximately 2 1/2 hours. He's accused of murder.

The wait was soon over, however. The jury returned the guilty verdict after approximately three and a half hours.

Ballentine does not enjoy the enormous popularity of another famous convicted murderer deejay, Vybz Kartel, who at 41 is 10 years younger and remains popular even though he is now behind bars.

However, like Kartel, Ballentine was known for his “bad man” image. With his sharp, violent lyrics delivered in a stuttering tone, he rose to fame during the height of dancehall's popularity in the 1980s. In particular, he was known for his flamboyant costumes and fierce musical “clashes” with other artists at the once annual Sting music festival (it took place each Boxing Day for about 30 years, but the event has now been discontinued), where he physically clashed with Vybz Kartel in 2003.

Jamaicans, however, will find humor in the darkest situations. One tweet suggested that Vybz Kartel had “filed for” Ballentine from prison (as in someone filing for an immigrant visa for a family member from the U.S.):

Father forgive me but this is funny as hell!! #NinjaMan pic.twitter.com/QdoLeielSZ

Ballentine is a strange, quirky, and at times enigmatic character, and his curious and eventful career, including several brushes with the law, has taken many twists and turns. This included a brief sojourn as a Christian, after a highly publicised baptism, around the time of the murder. One Jamaican, recollecting this phase, commented:

The way of the transgressor is hard Ninja. You shouldah did stay inna church. #ninjaman Ninja Man – Bible Fullfillment https://t.co/He9GnowXkR via @YouTube

Ballentine did not keep a particularly low profile while he was out on bail. He was even invited by the Jamaica Constabulary Force to give a motivational speech to police officers in January 2017.

When a Gov. can use a man on murder charge as a Motivational Speaker to the Security Force our corner dark. #NinjaMan #Guilt #DIntervention

He was also a judge on a popular and long-running dancehall competition on television:

What is sad is that he was given so much publicity and promotion whilst he was out on bail, even appearing as a Judge on Magnum King & Queen TV show. This is why crime is so hard to curb, because murder and badness ah nuh nutten!

What is sad is that he was given so much publicity and promotion whilst he was out on bail, even appearing as a Judge on the Magnum King & Queen TV show. This is why crime is so hard to curb, because murder and badness is nothing!

Some Jamaicans observed that, in hindsight, they should have taken Ballentine's lyrics literally:

Ninjaman was just found guilty of murder. I always took songs like “Murder Dem” and “My Weapon” to be metaphorical, but apparently not. Bummer. Still one of the all-time greats, though: https://t.co/nphIre0m58 #murderdem #ninjaman #dongorgon #gunpontooth

Some traditional media houses took the opportunity to discuss the troubling connections between dancehall and violence:

#Badness was part of his #art and on-stage #performance, but he was also living his #brand off stage through his actions. His conviction for murder is a sort of “#poeticjustice“, isnt it?- sad though it is. #Ninjaman #Jamaica

Ballentine's defence lawyer said that he would file an appeal, complaining that there were only seven jurors. According to the Supreme Court website, “all serious offences are tried by a Circuit (Supreme) Court judge sitting with a jury comprised of twelve (12) persons in murder or treason, and seven for other criminal offences.” The country's Jury Act has similar guidelines. The sentencing hearing will take place on December 15, 2017.