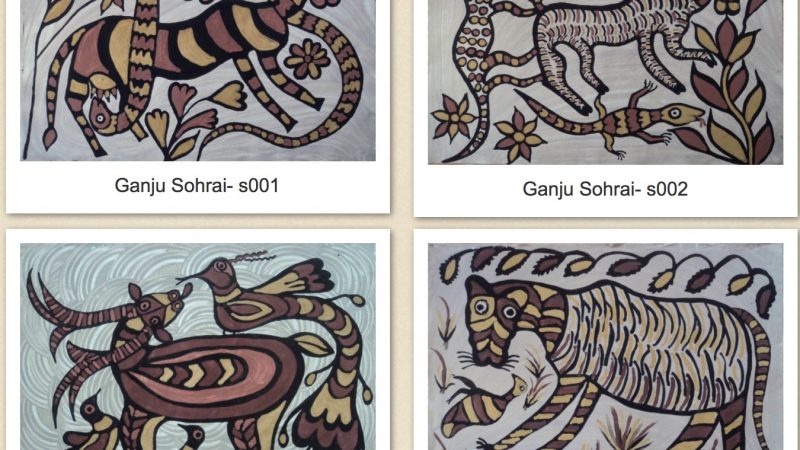 Examples of Sohrai Painting. Screenshot from the Tribal Art of Hazaribagh page via Bulu Imam

This post was written by Alankrita Anand, and originally appeared on Video Volunteers, an award-winning international community media organization based in India. An edited version is published below as part of a partnership with Global Voices.

Sohrai and Khovar, the traditional art forms from the Indian state of Jharkhand, are ritualistic art forms practiced by women. In recent years the art form has received a lot of attention as the state art and culture department is commissioning tribal artists and experts to paint the walls of government buildings, railway stations, and airports with colorful murals. This is instilling a sense of identity in the tribal artists and bringing their confidence back.

Sohrai art is the art of the Sohrai (harvest) festival. Created from mud on the mud walls of houses in Jharkhand https://t.co/yjrR4Peu8s pic.twitter.com/88rEU7Iu6m

Sohrai art form has been named after the namesake harvest festival that starts around Diwali. During harvest, the women of the house clean their houses and walls and paint murals of Sohrai arts. What is special about the ancient art form is that it is only created by women. Sohari depicts the crop cycle, and Khovar, or finger painting, depicts marriage and fertility and is traditionally made for weddings.

With her small pots of natural colors, extracted from different kinds of soils and rocks, well-known Sohrai artist Putli Devi makes deft strokes on the wall as Community Correspondent Basanti Soren talks to her about the art form.

In the video Putli Devi mentions:

What is special about the art form is that it is only made by women and passed on by women, and a handful of them at that. Most of them belong to the Kurmi community and live in Hazaribagh.

Putli Devi grew up in Chotanagpur, Hazaribagh and watched her mother paint murals with her fingers and learned the art form too.

I used to see wolves and wild cats run away with hens in the forest, so I started depicting them in my paintings.

I paint from memory, things I have seen growing up and things that I see around me.

But Putli and her co-artists were not always recognized for their work, neither did they do it commercially. However, Putli Devi is now thrilled at having showcased her work in countries like Australia and Germany.

One day, Bulu Imam came this way and really liked my paintings. I was reluctant to meet him but my sisters-in-law insisted. He encouraged me to paint on paper and took my paintings to a global audience

75-year old Bulu Imam is an environmentalist working on the preservation of indigenous art and culture in Jharkhand. He explains:

Indigenous peoples, the world over, have rights over the lands that they historically inhabit, but in India, there are limitations on these rights.

India has voted in favor of the United Nations Declaration on the Rights of Indigenous Peoples (UNDRIP) but does not recognize the term ‘indigenous peoples’ itself, making the declaration inapplicable to India.

On the ground, this translates to a violation of the rights of indigenous communities. Imam, for instance, points out that while Indian indigenous people or Adivasis are dependent on their land for their livelihood, they have no rights to the “crops under the land”. “I am talking about mining”, he says, referring to the rich mineral resources that the Chotanagpur plateau is home to.

The question of indigenous art and culture is strongly linked to identity, and rights. Imam says:

I found proof of Jharkhand’s adivasis’ indigeneity in their art, the caves in the region bear similar art from thousands of years ago. For indigenous communities to claim their rights, we have to establish that they have been living on the land historically.

Basanti, who also belongs to a tribal community, feels that it is important to preserve one’s art and culture.

The newer generation does not know much about its history, which is why it is important to promote local cultures. We must be aware of our traditions, it is a matter of identity.

Devidas Gaonkar, a correspondent who documents indigenous cultures in Goa, feels the same way about art, culture, and identity.

Sohrai art is now known as the state art of Jharkhand. It has come to receive patronage from both the state government and corporates like Tata Steel based out of the state. Railway stations in towns like Hazaribagh and Jamshedpur now greet travellers with Khovar and Sohrai murals that only adorned village homes until recently.

#SoMuchToDo #SMTDranchi Dont miss the ‘Sohrai Art’ Murals on d Walls on your left as you move from the Birsa Munda Airport towards the city pic.twitter.com/kFQ82398rN

More beautiful Sohrai art from Hazaribagh coming to Ranchi airport. Our talented artists are from Barkagaon and Katkamsandi. pic.twitter.com/C3AJdpnRE5

Has taking the art form from the villages to global and commercial spaces brought prosperity to its practitioners? Basanti says that there has definitely been an improvement in Devi’s financial situation but it’s not a lot and no one takes interest in learning the craft anymore. Imam, however, points out that the difference that it has brought in Devi’s life is a sense of identity and confidence. “It is priceless,” says Imam.