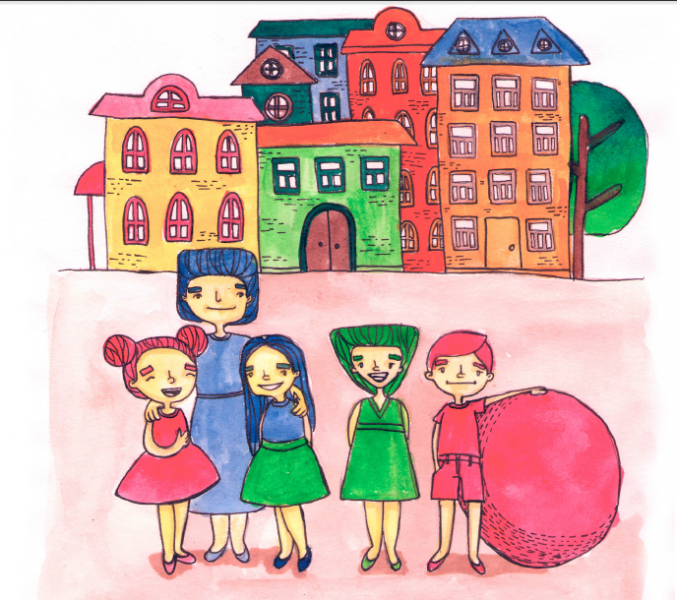 An illustration from the ‘Square Country’ fairy tale drawn by Natalia Ni. Permission to use granted by Altyn Kapalova.

The following is a version of a partner post from EurasiaNet.org originally titled ‘Kyrgyzstan: Children’s Literature Taking Fresh Look at Old Fables’. Republished with permission.

Esal, a seven-year-old girl, was born in a country where everything is blue and square-shaped. One day, an alien object, pink and spherical, turns up close to her house. When it offers her the chance to leave behind the hard edges of her homeland and travel through a world of different forms and colors, she seizes it.

The journey takes Esal at first through a country full of people and buildings that resemble the strange pink ball. Then, she travels to another one inhabited by green triangular types. At the end of the book, she and her new friends unite to build a new multi-colored, multi-shaped space all of their own, dissolving the borders that once divided them.

“When my son first read the book, he said that it was all about shapes,” said Asel Abdyrakhmanova of her ten-year-old’s reaction to Kyrgyz author Altyn Kapalova’s “Square Country” fairytale.

“Then we read it again,” recalled Abdyrakhmanova, an education specialist, who works for an international development organization. “The third time we read it, he said: ‘Oh Mom, it’s about how people are different and how that is a good thing!”

Kapalova’s stories turn up in the most unexpected places, such as the in-flight magazines of Kyrgyz air carriers taking passengers from Bishkek to Moscow. There, sandwiched between advertisements for watches and Dubai resorts, one can read of a beautiful underwater creature, Suluusu, who lives at the bottom of Kyrgyzstan’s Lake Issyk-Kul and dislikes the tourists who pollute her environment with their noise and rubbish.

Suluusu, whose tale is embellished by the eye-catching and identifiably Kyrgyz illustrations of artist Dinara Chokotayeva, is far from the goodie-two-shoes heroine typical of children’s literature.

She takes revenge on the holiday-goers by capturing the jewelry they lose when they are swimming, and hoarding it in a private corner of her deep blue kingdom.

“This is why jewelry lost in Lake Issyk-Kul is never found,” Kapalova’s tale concludes.

Kapalova, an anthropologist by training, writes books in both Kyrgyz and Russian under the pseudonym Altyn Aman. She might sense a kindred spirit in Suluusu.

The author admits to sourcing inspiration for her storytelling from her academic field trips into Kyrgyzstan’s regions, where books are scarce but oral tradition is rich.

“When I go to villages and meet people there, I take things from their speech, their thoughts and their mannerisms. I am a terrible thief!” she laughed. 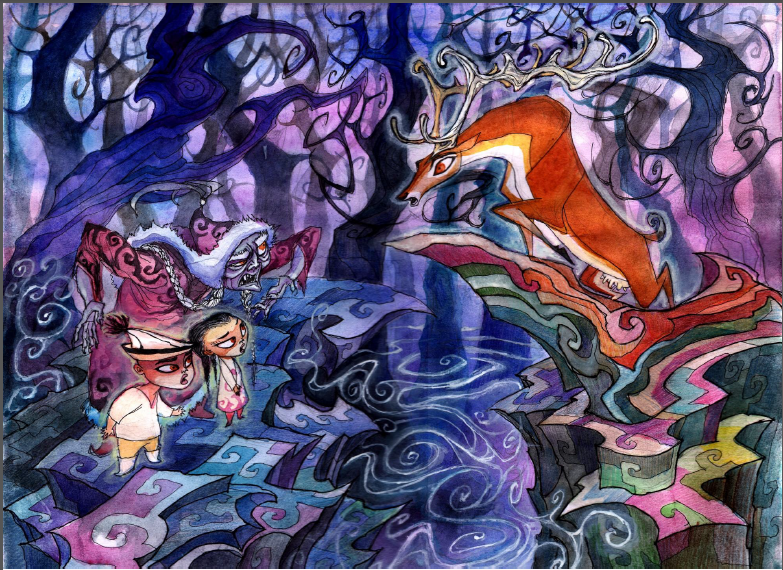 But while her books have brought her recognition and no shortage of personal pleasure, she can scarcely afford to give up the day job.

The book market in Kyrgyzstan is weak and stories like “Square Country” vie for room on the shelves of Bishkek’s bookstores with Russian children’s stories, and Western translations of popular tales. Her competitors are supported by substantial publishing machines.

The fact that her stories are being read beyond the capital owes much to the international organizations that have distributed them as part of donor-funded projects.

During the Soviet era, favored writers received comprehensive support from the state. That enabled a few writers, including Kyrgyzstan’s most famous literary export, Chingiz Aitmatov, to raise their literary profile through the vigorous promotion of Communist authorities. After gaining prominence in Kyrgyzstan, and then across the Soviet Union as a whole, his books were translated into dozens of different languages and read across the world.

But nowadays Kyrgyz writers “lack opportunities to forge contacts with international publishers,” said Dalmira Tilepbergenova, president of the PEN center for Central Asia, which is seeking funding to train writers in basic English in order to help them reach international markets. “Some seek private sponsors, some donor organizations, while others put their own money towards publishing costs.”

Spreading internet use has enabled a fourth group of authors to reach a wider audience without having to source money for their hobby.

Polad Suleimanov, a veterinarian, has developed a loyal readership by publishing his short stories on Facebook, and has also been published by the website of a local newspaper.

Suleimanov said he writes in the tradition of popular British vet-turned-author James Herriot and his American equivalent John McCormack. But he admits he has never seriously considered writing a book. “I don’t keep count of how many short stories I have written. Maybe 100, or maybe 200,” he told EurasiaNet.org. 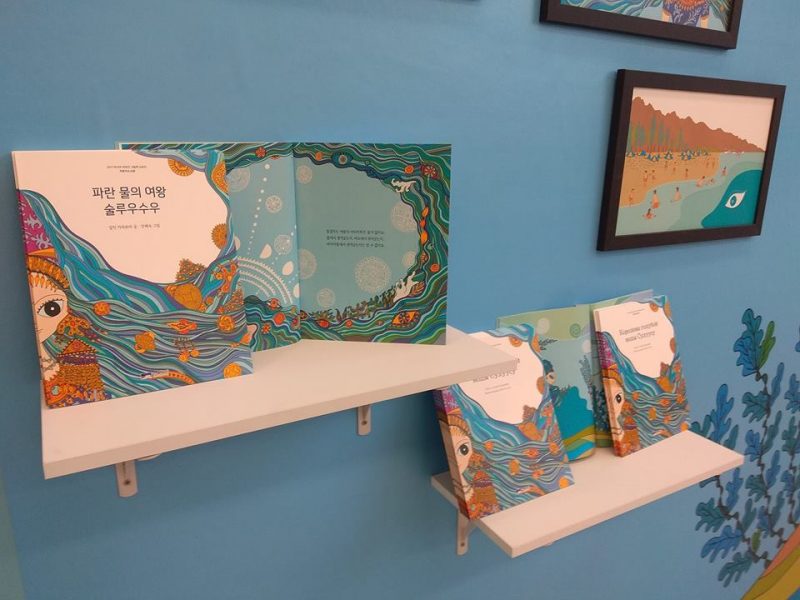 Suluusu, perhaps Kapalova's most famous tale has been translated into Korean, with new illustrations. (Altyn Kapalova)

Kapalova uses Facebook to promote her work, but sees the children’s book as an essential medium to encourage reading more generally.

“When I travel outside of Bishkek, what I find is there is a hunger to read that is not being satisfied,” she said. “In the capital, we are too saturated with information through the internet and struggle to find the time to read books. In villages, the problem is that reading material is not very available at all.”

As Kapalova hones a reputation as a national author, she has faced questions over her lack of traditionalism.

Some readers of her adaption of the famous Kyrgyz fairytale “Bugu Ene” (literally “Deer Mother”) queried why she did not set the story in the Siberian Yenisei region, which occupies a founding role in national mythology. Others asked why there was no wedding in the story.

“I took the things I liked in the original story and left out the things I didn’t need,” said Kapalova of “Bugu Ene,” which she describes as “essentially an eco-tale focused on humans’ relationship with the natural world.”

Moreover, the author, who identifies as a feminist, makes no apologies for departing from the “airy worlds” created by classical children’s authors such as Hans Christian Anderson, whose style of writing she still admires.

“It’s true that there are no fairytale weddings in my stories and there is no handsome prince,” she laughed. “None of my characters are especially waiting for him, either.”