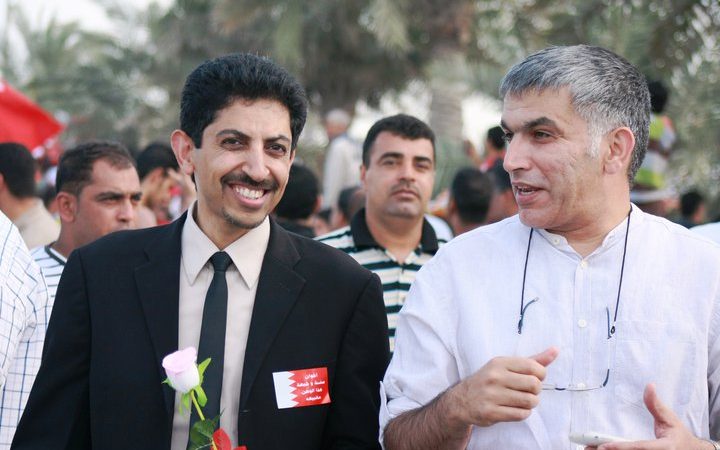 Nabeel Rajab (right) and Abdulhadi Alkhawaja at a pro democracy march in Bahrain in 2011. Photo by the Bahrain Center for Human Rights [CC BY-SA 3.0 via Wikimedia Commons]

Prominent Bahraini human rights defender, Nabeel Rajab, has been in jail for his human rights work since 13 June 2016. He is currently serving a two-year prison term for speaking to the media about the human rights situation in Bahrain. He also faces additional prison time for expressing himself on Twitter.

In July 2002, he founded the BCHR with his colleague Abdulhadi Al-Khawaja, who is serving a life sentence for his human rights activities. The BCHR continues to operate to this day despite a decision to close it by authorities in November 2004, and the jailing of its two founders.

When the popular uprising started in Bahrain on 14 February 2011, Nabeel Rajab was at its heart as a human rights leader. When the authorities arrested most of the uprising leaders, he became the only remaining voice outside of prison, which was heard by tens of thousands of followers on Twitter and the rest of the world, attesting to the grave violations committed by the government that oppressed the entire population solely based on their demand for freedom, equality and social justice.

For his engagement with the Bahraini uprising and human rights activism, Rajab is paying a heavy price. He was arrested and imprisoned several times and subjected to various types of threats, judicial harassment, abusive media smear campaigns, torture, and travel bans.

On 10 July, he was sentenced to prison for two years after being found guilty of spreading “fake news”, over TV interviews in which he spoke about mounting human rights violations in the Gulf kingdom. In those interviews, Rajab talked about journalists and NGOs being prevented from entering Bahrain, and a lack of judicial independence. On 22 November, a Bahraini appeals court upheld the two-year prison sentence.

In another case, Rajab faces up to 15 years in jail for criticizing Bahrain's participation in the Saudi-led war against Houthi rebels in Yemen, and for speaking out about torture in Bahrain's infamous “Jaw” prison on Twitter. Rajab was scheduled to appear again in court on 31 December 2017 for this case. However, the hearing was unexpectedly held on 5 December, four weeks earlier than the date originally scheduled by the court. On 3 December, Rajab's lawyers were informed by the court the hearing would take place on 5 December, under the pretext that a key witness in the case would be unable to attend the hearing on 31 December. Although, Rajab's lawyers protested this decision, the hearing took place on 5 December and was adjourned to 7 December. Rajab was unable to attend the hearing for health reasons.

- Due to health problems,Nabeel Rajab was not able to attend the hearing

- His lawyers were not given enough time for preparation, only 2 days informal notice

On 7 December, the hearing has once again been adjourned to 15 January.

Today, the 20th Court hearing against @NabeelRajab was adjourned to 15 January for the defence to submit their final argument.

• Charged for comments condemning the Saudi bombardment in #Yemen, & exposing torture in #Bahrain

Rajab faces additional prison time for charges related to two letters he published in the New York Times and the French newspaper Le Monde, while in prison.

In the NYT letter, published in September 2016, Rajab described the conditions of his detention and called on the Obama administration to ”use its leverage” to end the conflict in Yemen, and work ”to secure the release of people who call for peace, and are trying to build democracy in the region”. For this piece, Rajab was charged with “undermining the prestige of the kingdom.”

In the letter published in Le Monde in December 2016, Rajab called on France and Germany to re-assess their support for the Arab Gulf monarchies. Following the publication of this piece, he was charged with “spreading false news and statements and malicious rumours that undermine the prestige of Bahrain and the brotherly countries of the GCC [Gulf Cooperation Council], and an attempt to endanger their relations.”

Several organizations and human rights groups have repeatedly called on Bahraini authorities to release Nabeel Rajab. In May, the United Nations Committee Against Torture (CAT) expressed particular concern over Rajab’s solitary confinement and called for his release. Numerous others have called for his release, including European Parliament officials. On 27 June 2017, the Chair of the European Parliament’s Subcommittee on Human Rights Pier Antonio Panzeri issued a statement calling for the rights defender's release:

Rajab’s detention violates his right to freedom of expression. I call on the Bahraini authorities to grant lawyers and family members access to Nabeel Rajab, to drop all charges against him and to free him immediately

Despite these calls, Rajab remains in prison. He is not the only one in Bahrain to be jailed for his human rights and political activism, or for peacefully expressing himself. In the small island kingdom of just 1.4 million people, there are more than 4,000 political prisoners, according to rights groups.