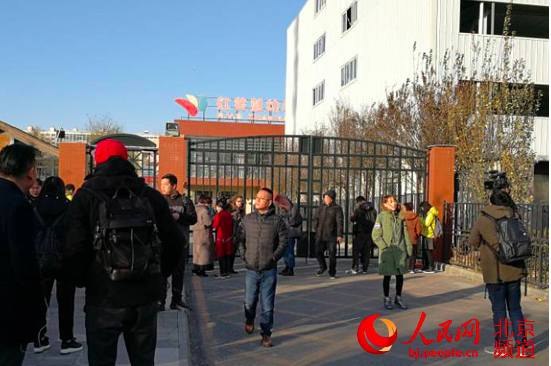 Child abuse at a private nursery in Beijing and the accompanying censorship of news and commentary surrounding the case has many Chinese criticizing authorities and skeptical of police conclusions.

On November 22, eight parents filed a complaint with Beijing police that their children were being harmed by staff at a kindergarten run by an education group called Red-Yellow-Blue (RYB).

According to local media reports, the parents found needle holes in their children's bodies. Some of the children said they were fed white powder by the teachers, and one child claimed that they were bought into a room for body inspections performed by a naked doctor. Allegedly, at least three children were punished with standing naked in class, and one showed physical marks that could imply sexual molestation.

The news was explosive on social media. On November 22 and 23, a group of enraged parents gathered outside the kindergarten demanding explanations and surveillance videos. The police then started the investigation.

Censorship soon followed. The once hot topic all but disappeared from social media. Netizens, however, continued to discuss the case in more private channels such as chat rooms, with many expressing concern that the police would not dig deep while investigating the established education group.

This is not the first time the education group has faced accusations of child abuse. In 2015, needle spots were found on the bodies of at least 17 toddlers in another kindergarten run by RYB in Jilin province. Four teachers there were subsequently arrested.

On November 25, Beijing Chaoyang district police announced on Weibo that they had arrested one 22-year-old teacher — as well as a Beijing resident who commented on social media about the connection between the headmaster of the nursery with a military clan stationed near Beijing.

On November 28, the district police further reported that there was no evidence of drugs being fed to children nor of sexual molestation. The parents, police said, admitted to making false accusations or coaching their children to provide false testimony about standing naked as punishment or drug consumption.

However, the police also said that the hard disk of the surveillance footage from the kindergarten was broken because the electrical supply to the video surveillance set had been unplugged frequently for a lengthy period of time. The police managed to recover 113 hours of recorded footage.

Under the police updates posted on Weibo, the majority of the comments praise the work of authorities and condemn rumormongers.

Nevertheless, despite the censorship, critical remarks about the investigation continue to pop up on Weibo. One netizen summed up the message of the police updates in a few bullet points: 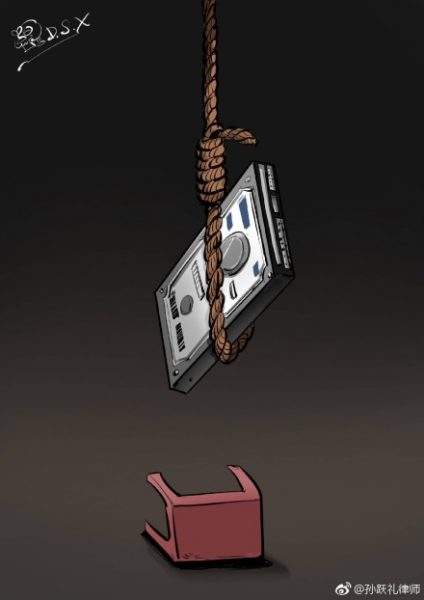 Cartoon of a hard disk hanging itself. Viral image from Weibo.

1. The kids are OK; 2. Teachers are mad [they needled the kids because they refused to sleep]; 3. The surveillance camera's hard disk is broken; 4. Parents are using the kids to create a mess; 5. Netizens and the kids were both tricked by the parents; 6. Netizens should stop spreading rumors or they will be arrested.

China introduced the online rumor law in 2013. Netizens who distribute unverified information would be arrested and charged with spreading rumor if their posts have been viewed for 5000 times or shared for 500 times. The maximum jail time is three years.

Another Weibo user slammed the police report and censorship of online comments:

Sina just reported on the investigation of Chaoyang district police. I read the report immediately. So the result of the investigation is that the abuse was fabricated by parents? This is so terrifying. Maybe this is a reflection of our society, that invisible power rules?
In a matter of a few minutes, thousands of questions popped up underneath the report. Then in a matter of a few seconds, all the comments vanished and the comment function was closed.
Criticism can be erased like this?
The police have taken away all the CCTV footage. Just by saying that the hard disk was broken, [you can] conclude that everything did not happen? This is such a joke.

To highlight the inconsistencies within the police report, “broken hard disk” became a hashtag on social media.

Another censored piece put together all available news reports on other unrelated cases in which police investigations reported that surveillance cameras or their associated hard disks at the scene of the alleged crime weren't working. Inevitably, majority of the cases ended up with the same conclusion that there were no evidence supporting the allegations.

Netizens made jokes about the hard disk and one widely circulated cartoon showed a hard disk hanging itself (see image on the right.)

Education business is booming, but who's looking out for the children?

The welfare of children in kindergarten has become a hot issue in China, where a string of abuse cases has revealed loose regulation and supervision in the childcare and early learning industry.

This time, the kindergarten involved is run by RYB, a high-end private education group that went public in the US stock market in September 2017. It targets China's emerging middle-class families and features school fees as much as 5,000 yuan (750 US dollars) a month for bilingual education. Yet, the incident reveals that spending that much money doesn't guarantee that children are protected from abuse.

Massive capital has poured into China’s early education industry; it's projected to be a 348-billion-yuan market by 2020 with 20% average growth annually, after China abolished one-child policy in 2015. However, rapid expansion has led to cutting corners — such as hiring unlicensed teachers — to increase profit or overstretched budgets.

RYB is a typical case of the expanding sector. Founded in 1999, the group opened its first private kindergarten in 2001 and has built a reputation as the leading education institute providing the best quality early education. After obtaining a franchise license in 2013, by June 2017 the group owned 853 play and learning centers and 225 nurseries, and planned to further operate 724 pre-school institutions all over the country. RYB's revenue mainly comes from franchise fees.

It doesn't seem like any of the industry-wide problems are getting much attention following the latest case, as the focus has been placed on the individuals involved. As Twitter @wyjaaa sarcastically commented:

Hard disk broken, no more surveillance tapes. The unlicensed teacher admitted the crime and the security guard admitted [that he had unplugged the surveillance system ]. The parents stop complaining. The rumormongers will soon appear on China Central Television confessing their guilt. Congratulations, the stock price of RYB has bounced back and the low-end population [including the unlicensed teacher and security guard] continues to celebrate the prosperous era…