After Authorities Evict Beijing's ‘Low-End’ Residents, Chinese Ask: Where Is the Humanity? 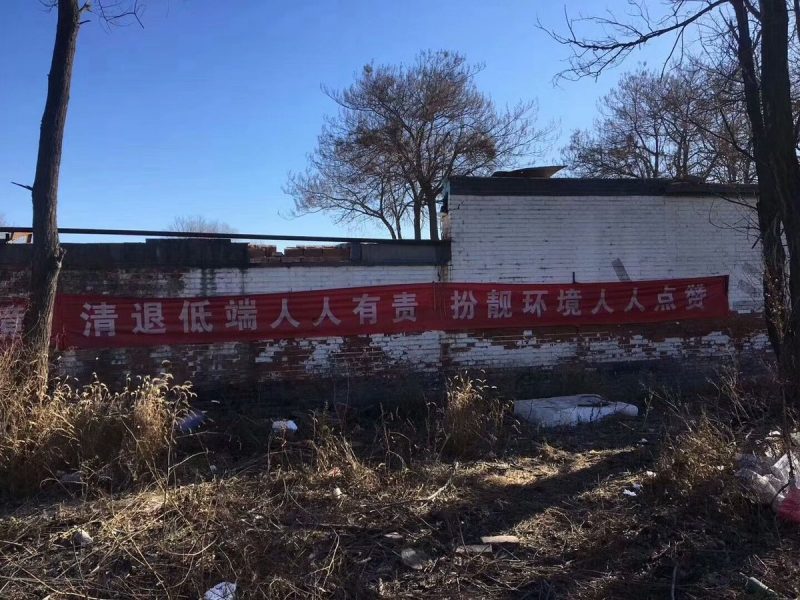 The banner reads: “It is everyone's responsibility to clear out the low-end population. People like tiding up the environment.” Viral photo on social media.

A week after the deadly fire that killed 19 broke out in Daxing district, on the southern outskirts of Beijing, the city government launched a campaign against illicit buildings and cleared out thousands of migrant workers: the so-called “low-end population.”

The forced eviction of these people started a few years back. In 2014 in central Beijing, the Haidian district government shut down seven grassroots markets, forcing migrants to leave so that authorities could appropriate the space for “upper-end” commercial purposes.

Rural migrants who had been laboring in small workshops inside the city were forced to settle around the outskirts of the capital. Then came the fire.

And in recent days, just as these rural migrant workers were forced out of their dwellings into the streets, Beijing’s temperature fell to below 0 degrees Celsius at night.

Chinese netizens could not repress their anger and slammed the government on social media.

Really, I am not against the tearing down of the Dahongmen [clothing wholesale market] and I support the government’s policy up cleaning up illicit buildings for fire prevention purposes. But can law enforcement be more humane? If a landlord has to end a rental contract, he has to give a month's notice. Why can’t you give them a grace period so that they can sell their furniture, find a place to settle or plan for travelling back home? I don’t understand why it has to be done in such a hurry. And I don’t understand why the so-called low-end population has to be kicked out of the city. China does not have the kind of ghettos like those in Mumbai. These people, they just want to work in Beijing earning 3,000 per month and paying 300 for a place to sleep. They probably have old grannies, sick mothers or school-age brothers and sisters to take care of back home…I would say our development path is better than the capitalist country but this time the local government in Beijing has exemplified bad policy. …you don’t see people in the policy.

In response to widespread criticism, the Beijing Chinese Communist Party committee stressed that local government does not have a policy of evicting the “low-end population,” calling it a rumor and emphasizing that the action was taken to prevent fires.

However, many netizens discovered the term in a number of government documents concerning city planning. Here is one source from Twitter:

I found a source of the term “low-end population,” it is in the district government’s five-year plan.

When I read the term “low end population” from some district governments’ documents and media reports, I was shocked and frightened. Such discriminatory and insulting term should never be appeared in government documents… Such term and such suggestion is totally against Marxism and Leninism, it is totally against our party’s principle and value.
The so called “low end population” is referred to migrant workers. They come to this city, working very hard with little return to serve this city. They are the bricks of the city and all they want is to improve their family’s living condition.

Putting aside the controversy over naming of migrant workers, more than a hundred mainland Chinese intellectuals co-signed a letter demanding Beijing authorities to stop the forced evacuation:

On 18 of November 2017, a great fire broke out in Daxing district of Beijing city causing 19 deaths and 8 injuries. Among the victims, 8 were children. Rather than paying visit to the victims of the disaster and reflecting on their own responsibilities, Beijing authorities launched a 40 days campaign targeting migrants’ settlement in the name of security and fire prevention. After the notice was delivered, the law enforcement officials forcibly evicted the migrants overnight. Thousands of grassroots lost their home and according to estimation, ten of thousands would soon be kicked out. We believe that such an action is against our constitution and human rights. It should be stopped and corrected.

The group of intellectuals also expressed hope that Beijing’s city planning should reserve space for the grassroots:

Beijing must reorientate its position. It has to be clear that resources in Beijing comes from the whole country. Beijing’s development relies not only on Beijing’s residents. People from the whole country have made contribution. Beijing has the responsibility to contribute back to the country rather than treating others, especially the grassroots with such arrogant, discriminative and insulting manner. Forced eviction of grassroot migrants who are their own country fellow is more insulting than discrimination against other races. Such situation is should not continue. The future Beijing development should take this into account. It should be humane and inclusive. Some city space should be reserved for the grassroot migrants.

It is quite unlikely that the intellectual’s call would be realized. As pointed out by @gongminyaoyao on Twitter, the forced eviction of “low end population” is part of the project to ensure the capital’s political security:

The cleaning up of low end population is a small project under a big project. It has been put forward many years back but has not been fully implemented. This time they made use of the fire to launch the campaign. Eventually Beijing will be turned into a forbidden city using household registration and [high end] occupation as barrier. The geopolitics is to ensure the capital’s security.

And @rongjian1957, an experienced media worker, commented on a eviction photo and said that the incident symbolized the beginning of a new era:

This photo probably deserves the Pulitzer Prize? It symbolized the beginning of China’s new era? Beijing’s forced eviction of low end population, according to official media outlets, is supported and welcomed by 100% Beijing citizens. If that’s really the case, why the photo records this warzone-like scene? I said five years ago, the future of China is not about getting the best outcome, but preventing the worst outcome. The answer is reflected in this photo.

Instead of waiting for the mercy of the authorities, volunteer groups tried to help the victims of eviction by connecting them to temporary free shelters. @xiucai1911 commented on volunteers’ effort:

[Words on photo: You insult the word patriot.]
Some country’s capital labelled Chinese workers as low end population and tore down their accommodation. The scene was very chaotic as the workers faced forced expulsion from the country. It was winter time and they had nowhere to stay in the cold winter night. They could not even protect their own personal safety. “Whoever offends China would be extinguished”, China’s veteran soldier Leng Fung went to the spot alone, arrested the rumor monger and destroyed the office of the organizations which provided shelters for the Chinese workers. [People were surrounded by] Chinese national flags and the music of anthem.