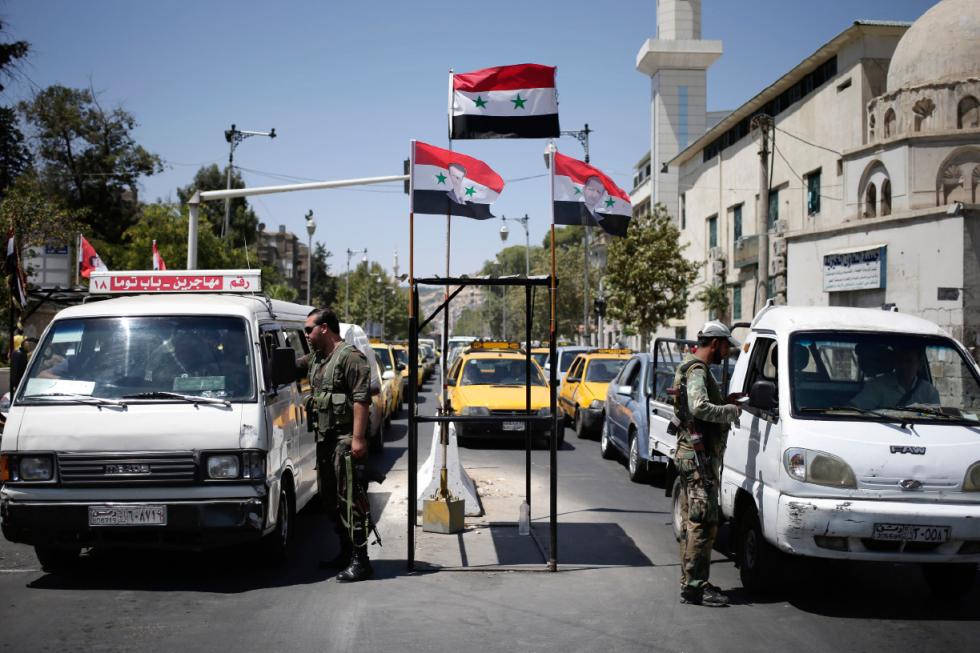 Photo of a regime military checkpoint. Used with permission.

Salma was scrolling through her Facebook newsfeed when an unverified piece of news struck her as bizarrely funny: Halloween celebrations have been banned in public places in Syria.

”Apparently they have taken pity on us. Our lives here are already a never-ending Halloween,” she tells Global Voices, smiling.

In a country gripped by a devastating conflict like the Syrian war, Halloween's flippant, playful quips contrast with serious, gruesome horrors that have become part of the Syrians’ macabre reality. Although the capital city Damascus has been spared the worst of fighting, different shades of fear diffuse the lives of the Damascenes.

”I have to run this gauntlet every day on my way to work and back home,” she says.

One might assume that after more than six years of military checkpoints, set up to tighten the Assad regime's grip on the capital since protests first flared up in 2011, locals would have reconciled themselves to their presence. The case is far from it, according to many, including Salma.

”They have made our lives difficult, causing delays and congestion. They are choking our city”:

I hate it when I have to return home after sunset. My pulse races under their fixed gaze. I feel ill at ease to say the least. Sometimes they are tipsy, laughing out loud and carousing.

‘They can do anything and get away with it. Who is there to protect us after all? There is a state of chaos and lawlessness everywhere. The state is busy coping with the consequences of war

Salma fumbles for the right words to describe how she feels. ”You feel naked, unarmed and powerless in the presence of this heavy-handed arrogant military prowess.”

Doaa, a university student at the Faculty of Dentistry, echoes her thoughts:

I have long stopped wearing makeup or revealing clothes, although I have always been a free girl, just to avoid getting myself into trouble.

Soft catcalling or flirtation in the street used to be a stroke to a woman's ego. But during war, you can only find men dressed in military outfit, usually armed, in the streets. It makes me jittery. They are arrogant about the power they have over the locals.

‘If my name is found, I will be dispatched to one of the front lines.’

For military-aged men, checkpoints continue to be a constant source of horror.

The government has been using these checkpoints to conscript new soldiers to the Syrian forces, which are depleted from a protracted conflict. Fear of arrest and conscription has prompted many between the ages of 18-42 to flee the country in waves of undocumented immigration to countries next door and in the European Union.

Those who have stayed behind grapple with daily difficulties, pushing many to shut themselves in.

”My permit to postpone military service is about to expire. I am not going out unless on urgent errands,” says Hisham, who has a law degree from Damascus University:

They would search databases saved on their computers. If my name is found, I will be dispatched to one of the front lines.

Every time I passed one of these checkpoints was an outright nightmare. I would wait with bated breath for the military man to beckon to the driver to move on.

You can be arrested for evading military service, for having a similar name with a wanted man. Everything is possible.

Hisham relates the story of what happened to his friend: He was on his way to his own wedding party when he was stopped by a checkpoint and summoned to military service. The friend had to pay a hefty amount of money to postpone it for a few days.

This has made men thin on the ground. Women often joke that in the near future, they will not need to don a hijab, for there will be no men on the streets.

‘Everything smacks of war. Look at the people's weary faces.’

Ruba, an English literature student, tells Global Voices that she ironically recalled an article she read lately listing the most romantic cities in the world when she passed by a military vehicle in her densely populated neighborhood.

”Damascus used to be called city of Jasmine, which symbolizes purity, romance and love. Now look at the situation on the ground. Everything smacks of war. Look at the people's weary faces.”

Fear extends to the use of social media. A pro-opposition activist based in Damascus who asked to be identified as Osama already goes by a fake name on Facebook to engage in solidarity campaigns with areas under government siege.

He says fears of arrest are now more pronounced than ever:

It was unthinkable when the revolution started seven years ago that today we will be fearful to express our thoughts on social media. Unfortunately it is happening.

Osama anticipated a wave of arrests and score-settling by the regime of President Bashar al-Assad against opponents, emboldened by a military superiority on the ground.

These accounts belie regime attempts to project an impression that life is back to normal following recent military wins, the latest of which was the recapture of al-Bukamal city in Deir Ezzor that sealed the fall of Isis in Syria. These attempts have included the holding the Damascus International Fair after a six-year hiatus, celebrating much-vaunted achievements of the Syrian football team which came close to qualifying for the World Cup, and the restoration of basic services, mainly electricity.

However, these so-called pessimistic perspectives receive pushback from those who see a clear improvement in the situation, as the regime has managed to claw back significant swathes of territory from opponents.

”There is a predominant sense of relief in Damascus compared to previous years,” says Salem, a government employee. ”Some checkpoints have been removed. Electricity is back 24 hours a day, the prices of some basic commodities have gone down. I believe that this is very promising.”

Others will find these wins too little and hollow.

”It is ridiculous to assume that war is over and the locals’ woes have come to an end just because some services are back and prices have slightly dropped. Rocket and mortar attacks continue on near daily basis. Just yesterday, there have been eight deaths,” Hisham says.

‘Fear in Damascus ebbs and flows, but is always there.’

Rocket and mortar shells continue to hit the city, with a recent spike in the death toll after a brief lull that followed the establishment of de-escalation zones in the Damascus countryside, shattering a temporary sense of relief that prevailed in the Syrian capital. This came on the heels of a government offensive in eastern Ghouta, a rebel enclave under government siege near Damascus.

”The thunder of artillery and rockets hitting Ghouta echoes all across the city. Buildings here are literally shaking,” says Samar, who lives in Bab Sharqi neighborhood. ”We have not heard these sounds in a while.”

”Incoming or outgoing?” People ask in jest when they hear a sudden boom, wondering whether it is a rebel rocket hitting Damascus or the sound from the army's artillery pounding opposition-held areas.

Clearing this kind of ambiguity is part of what a Facebook page called Diaries of a Mortar Round in Damascus does.

The page, originally set up to track rebel rocket attacks on Damascus city, occasionally tells people in Damascus not to worry because the source of the noise is the Syrian military's shelling of opposition areas. Many in the comments express relief and urge the Syrian army to do more to eradicate ”terrorism” and restore security to Damascus.

But others criticize what they consider a chilling lack of sympathy for the tragedy unfolding in their close vicinity.

”Few mortar shells can disrupt life here. The sounds of artillery cause panic, especially among children. I find it impossible to imagine the horror visited on those on whose heads these rockets are falling,” says Manar, a teacher at an elementary school in old Damascus.

Asked if the Damascenes feel more safe after seven years of war as the regime touts new military wins, she says ”fear in Damascus ebbs and flows, but is always there. Many years will pass before the Syrians can feel safe and secure again.”