After 10 Years of Legal Battles, Mozambique's Only LGBT Organization Takes a Step Closer to Legal Recognition 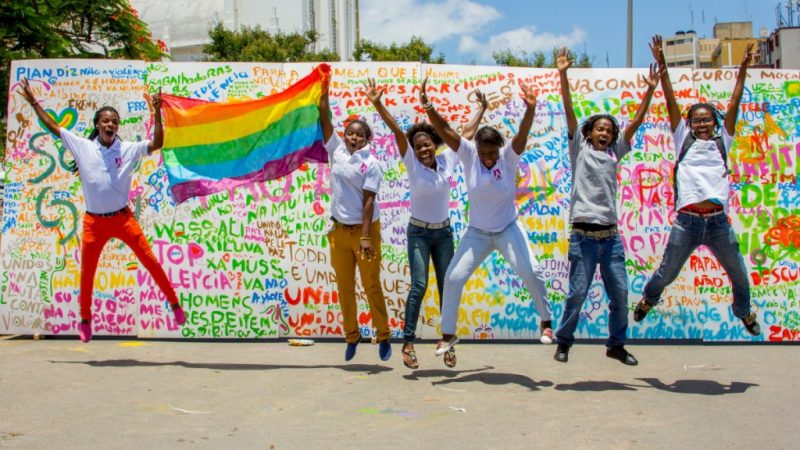 Members of Lambda at an event in 2013. Photo: Lambda/Flickr, published with permission.

Lambda, Mozambique’s only organization for lesbian, gay, bisexual and transgender (LGBT) rights, took an important step towards legal recognition, which it has struggled with for over a decade.

The Constitutional Council of Mozambique – equivalent to the Supreme Court – ruled that the status of Lambda did not violate the republic’s constitution, as had been alleged by government officials.

Since 2008, Lambda had successive applications for formal registration as an association ignored by the Ministry of Justice, the body responsible for the registration of civil society organizations.

According to the activists, government officials had said informally that the request could not be processed because it went against a clause of the 1991 Law on Associations. That particular clause blocked the registration of organizations which pursue aims that are contrary “to the moral, social, and economic order of the country and offend the rights of others or the public good”.

On 31 October, the Council declared the clause to be unconstitutional for contradicting the constitution’s Article 52, which says that “armed organizations which are military or paramilitary and those which promote violence, racism, xenophobia, or which pursue aims contrary to the law are prohibited”. The Council ruled that those are the only kind of associations prohibited from registering.

The Council’s decision did not mention specific associations, but according to Lambda’s executive director, Danilo da Silva, the ruling finally opens the door for the organization’s legal recognition. He told German broadcaster Deutsche Welle:

This stance of the Constitutional Council to some measure disarms this justification which was given to us informally.

The legalization of Lambda adds to the gradually more favourable environment for Mozambique’s LGBT population, one of the few countries in Africa where homosexuality is not a crime. For example, in Sudan, and parts of Nigeria and Somalia, homosexuality is punishable by the death penalty, and life imprisonment in Uganda, Tanzania, and Sierra Leone.

The former Portuguese colonies are among the most tolerant countries for LGBT people. Cape Verde, for example, was the second to decriminalize homosexuality, in 2004, and one of only six African countries to sign a document in 2008 from the UN’s General Assembly condemning violations of sexual minorities’ rights.

Some Cape-Verdean jurists also argue that parts of the Civil Code that restrict marriage to only people of the opposite sex are unconstitutional because they predate the constitution’s promulgation. The documentary “Tchindas”, which told the story of Tchinda Andrade, a prominent transgender activist in the country, won various international awards in 2016.

However, even in less restrictive countries, the LGBT population is not free from prejudice and violence. In Angola, where the law is vague when in comes to homosexual activity, the LGBT community lives anonymously and faces discrimination in access to healthcare and education, according to Carlos Fernandes, director of Associação Iris Angola.

Generally, the decision of Mozambique’s Constitutional Council received pushback from some sectors of society. On a much-commented online post by journalist Ericino de Salema, for example, many spoke out against Lambda’s recognition and homosexuality itself.

Danilo da Silva, Lambda’s executive director, responded in a post to those comments:

I see a lot of resentment in those who want to use the coercive power of the state to enforce their prejudices. It is a shame since living in a society is knowing how to respect others, even if we do not sympathize with their life choices, as long as they do not affect us.
Fundamental rights are rights for all Mozambicans, they are not privileges for some.
Let us all take the opportunity to learn from this ruling that it is not only a victory for LGBT people, but for all who are different and have different ideas. That ruling is an ode to equality, peace, and social harmony

Today I am very proud to be Mozambican.