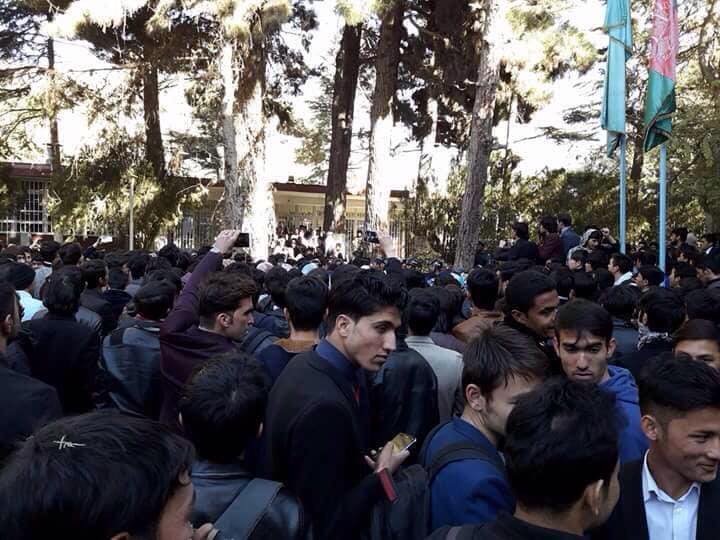 Photo of protest mach by Baqi Samandar. Used with permission.

The recent suicide of a female student at a university in Kabul has triggered outcry and led to calls to end corruption and discrimination in Afghanistan's rotten higher education system.

Afghan students stormed social media and mobilised for a march at Kabul University in the days after a female student committed suicide, reportedly because her final thesis had been failed multiple times on November 19.

The suicide and subsequent protest were widely covered by local media.

Friends of Zahra Khawari, a senior student of Veterinary Science department of Kabul University have told journalists that she committed suicide aged 25 after her thesis was rejected for third time by her supervisor, Gul Mohammad Tanin. Police have confirmed the suicide and launched an investigation that has already seen her supervisor arrested on unspecified charges.

Ms. Khawari was living in a dormitory at Kabul University. She came from Daikundi province, a deprived province in the mountainous central part of the country. She allegedly poisoned herself at breakfast and died some time later in her room.

The scandal appeared to force the resignation of Afghanistan's acting minister of Higher Education. Abdul Latif Roshan stepped down November 22 and was replaced Najibullah Khwaja Omari.

As soon as the news of Zahra Khawari's death broke, Afghan Twitter and Facebook accounts were full of images of the student, along with messages of condolence and stern condemnation for her supervisor.

Break down the hand that pushed a person to kill herself.

Asif Ashna, a liberal-political activist, posted a widely-shared photo of Zahra converting a steel container into a chicken coop at her own expense and on her supervisor's orders.

In his Twitter post he said he regretted not using his time as a student at Kabul University to push for serious reforms:

Mulling Zahra’s efforts [at university] and suicide protest, I feel confused. I review my own personal experiences and the things we ignored. There were so many changes we should have pushed for.

Many young Afghans, are hoping Zahra's death can become a focal point to modernize higher education, at least at the capital's flagship university.

A national newspaper opened a column, encouraging students to share their experiences and make suggestions for reforms. Many commented on the hurdles they had had to surpass to get heir diplomas.

The day after Khawari’s death, her fellow students called a march. Flooding the Kabul University campus they spoke out against discrimination and the “dictatorial” behaviour of lecturers towards students, who had struggled through difficult entrance exams and financial difficulties to enter the country's top university. Kabul University, they said, was a “dasher of dreams”.

Tahir Qadiry summed up the mood of protesters on Twitter:

What happened to #Zahra at #Kabul University is a small example of rampant corruption & chaos at state-run universities. Zahra committed suicide to rid of the mess & injustice. It recalls Bollywood movie #3idiots. Academic areas must remain academic pic.twitter.com/Gcouhi90Rs

Zakiiiieh, an Afghan twitter user, claimed that Zahra — a member of the long-suffering Hazara minority — may have been a victim of ethnic discrimination.

It is so painful. Discrimination… Zahra could have been a genius, scholar, inventor and builder of this country. But she passed away with her dreams.

Perhaps most remarkably, some staff at the university joined in the calls. Younus Toughyan, a lecturer at Kabul University, posted on Facebook:

This is not the first time an unforgivable scandal happens at Kabul University. At this university, many lecturers raped their students and were reprimanded instead of being dismissed. They received bribes, evidence of which was shared on Facebook, but none of them were arrested. For years, lecturers have engaged in prejudicial behavior based on language, race and ethnicity. I am ashamed to work with them…I stand with the protesters till to the end. Death to the sick people.

A tragedy that ended with indifference?

The story of Zahra Khawari has resonated strongly with Afghan students because it embodies the personal sacrifices that so many of them have made to secure a diploma in a system riddled by graft and dicrimination.

Zahra's thesis, which initially focussed on methods of feeding sheep, was the final hurdle she faced before graduation. But according to her roommate, who was the first to find her after she took the poison with her breakfast, Zahra's supervisor Gul Mohammad Tanin found reason after reason to fail her, even after she changed topic:

Zahra went through a hard time working on her project, and spent so much money. Not once, but multiple times her dissertation was simply dismissed. She was no longer able to spend time working on the project because she is from a poor farming family. She came under too much pressure and finally killed herself.

Not that supervisor is the only alleged villain in Zahra's sad tale. According to some media reports, after she was found poisoned but still alive, the head of Zahra's dormitory did not immediately authorise her transfer to the hospital. Instead, the woman enquired with her friends and her aunt as to whether or not Zahra had a dormitory card to prove residency.

By the time her aunt was able to take her from the dormitory to the hospital, it was already too late.