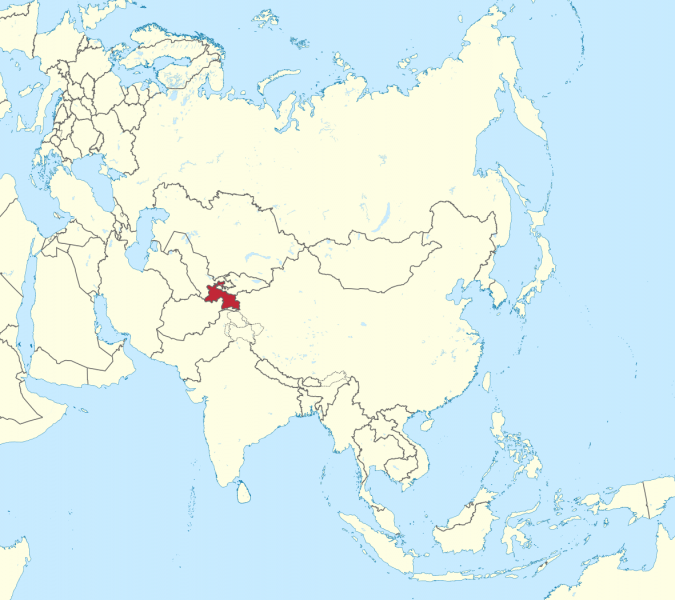 Over the last few years, ex-Soviet Tajikistan has developed a reputation as a country that likes to ban things. While some of the bans appear linked to the government's fears over religious extremism, others are more difficult to fathom.

1. No New Year, please. This isn't the Soviet Union (anymore).

The first ban on this list has been in force since late 2015. Tajikistan banned New Year — the most important holiday of the Communist era — in schools and universities. Privately, Tajik families are still allowed to celebrate New Year, of course, although there are also restrictions on private celebrations (more on that later) so they would be best advised to do so modestly.

2. No Halloween or Holi parties, please. This isn't America OR India! 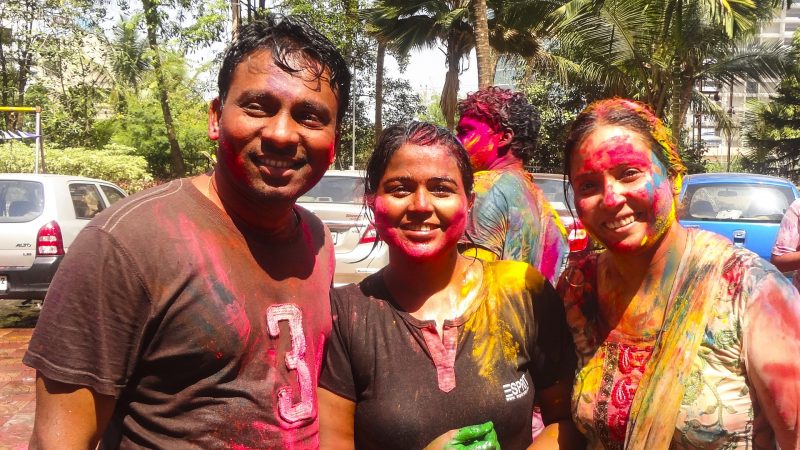 Indians enjoying the festival of Holi. Photo by pashminu. CC0.

On May 15 [2016] police aggressively dispersed a gathering of young people celebrating the Hindi fesitival of Holi in Dushanbe on the grounds that the event was haram — not in compliance with Muslim customs. What particularly aggrieved the public was the level of physical violence used against the underage children.

Still, as the saying goes, when God closes a door, he opens a window.

Tajiks now have other days on which they can freely celebrate. There is the newly created President’s Day, on November 16, Flag Day on November 24 and then National Language Day on October 5, which happens to fall on President Emomali Rahmon’s birthday.

Very few people in Tajikistan celebrate Holi anyway. But the crackdown on on the festival last year followed police detentions of fancy-dress ghouls and vampires marking the more popular holiday of Halloween in 2013 and 2014. It is ironic that in  this case police invoked Islam when they broke up the celebration, because, as will become clear, local authorities don't like that much either.

But what holiday do Tajik authorities actually like? The answer to that is simple: Nowruz. Nowruz, which marks the spring equinox, is sufficiently pagan so as not to contribute to growing religiosity in the secular, majority-Muslim country, and also emphasises Tajikistan's Persian heritage.

3. No birthday parties outside the privacy of your own home. You know you're not rich enough anyway! 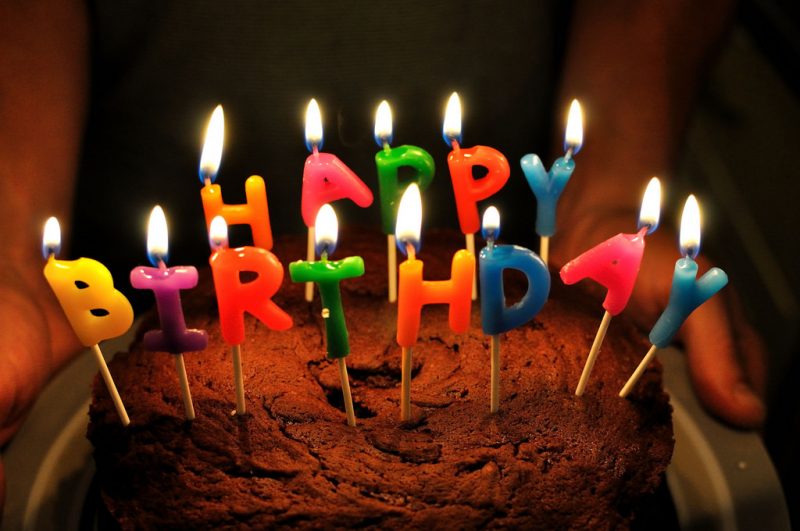 Birthday Cake by Will Clayton. Uploaded onto Flickr. CC 2.0.

If you are brave enough to celebrate your birthday in a cafe or restaurant, spare some extra cash for the fine.

Amirbek Isayev learned this lesson at his own cost when he was fined the equivalent of $600 — a huge sum in Tajikistan — for bringing a tell-tale cake to a pub in Dushanbe. Prosecutors opened their case against Isayev when a photo featuring him and the cake at the pub surfaced on Facebook. Had he been celebrating with a steak, he might have got away with it.

4. No celebrations of school ending, please. Real life is beginning, and that is much, much worse, believe us. 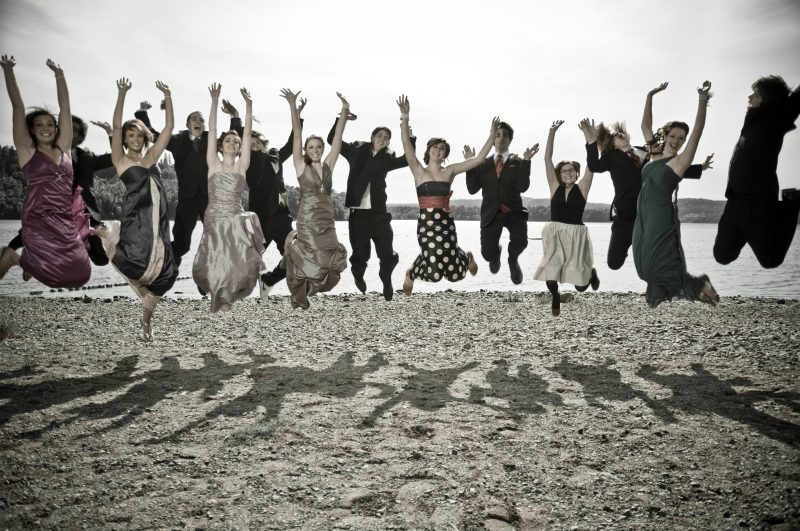 Spoilsports? You bet. School leavers parties — another great Soviet tradition — were banned in 2016. Officials never really explained the ban, but it is possible they had two targets in mind: gift-giving among teachers and students, and drunken leavers’ party mayhem in the country's capital Dushanbe. Either way, graduation from school is now a much more somber affair.

And weddings are much more threadbare, thanks to the ever tightening Law on Functions; the same law under which Amirbek Isayev was prosecuted. The latest amendments to legislation that first came into force in 2007 are the most prescriptive so far as the government continues to urge people to spend less on key life events.

A passage from an RFE/RL article published in September this year offers an idea of what happens to families that fall foul of the law.

Final preparations were in full swing at Zaidullo Khudoyorov's home in southern Tajikistan as the family got ready to celebrate the marriage of his eldest daughter.

Just hours before the party, however, a group of local officials raided the house and confiscated most of the food the family had prepared for the banquet.

The officials deemed the quantities of food “wasteful” and in violation of a newly amended Tajik law that regulates and limits how much families spend on weddings, funerals, and all other private functions.

“We managed to prevent a lawbreaking in the village,” said Kholmurod Ibrohimov, an official who took part in the August 26 raid, in Dahana, on the outskirts of the city of Kulob.

“During the raid, we established that the family prepared a wasteful amount of food, such as special flatbreads and halva for the banquet at the bridegroom's house,” Ibrohimov said on September 18, after reports of the seizure emerged. “We seized the food and handed it over to the Kulob psychiatric hospital.”

Ibrohimov also pointed out that the cost of the food was incompatible with the “impoverished” family's income.

6. Or loud crying at funerals… 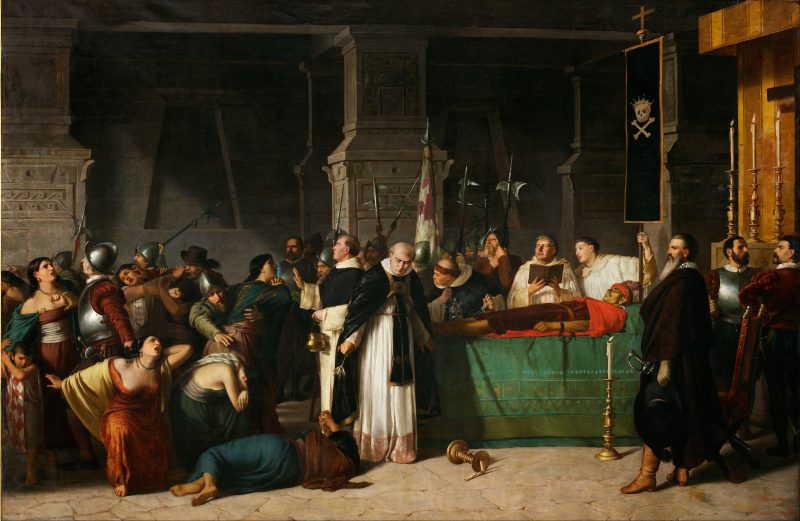 The Funerals of Inca Atahualpa by Luis Montero, 1867.

It's true! This ban came in two months ago. Read it and weep!

7. No ‘alien’ clothes. Keep it national!

To discourage women from wearing the Islamic hijab, Tajikistan has passed a law that urges citizens to wear traditional clothes. pic.twitter.com/qPWQggtRfB

Several Western media outlets reported in September this year that Tajikistan had banned the hijab, although the law that was passed did not mention the hijab by name. Rather it called for protection of traditional, or ‘national’ clothes from their ‘foreign’ competitors. At any rate, life has become harder for hijab-wearing women in recent years, as the government cracks down on forms of dress common in the Middle East and neighbouring Afghanistan.

In addition to a ban on the hijab in state educational institutions, there have been bans on the sale of hijabs in certain cities and reports that women wearing hijabs were turned away from state hospitals. Tajik women can still cover their heads, and are often encouraged to do so, but not their chins. Something like this is just fine: 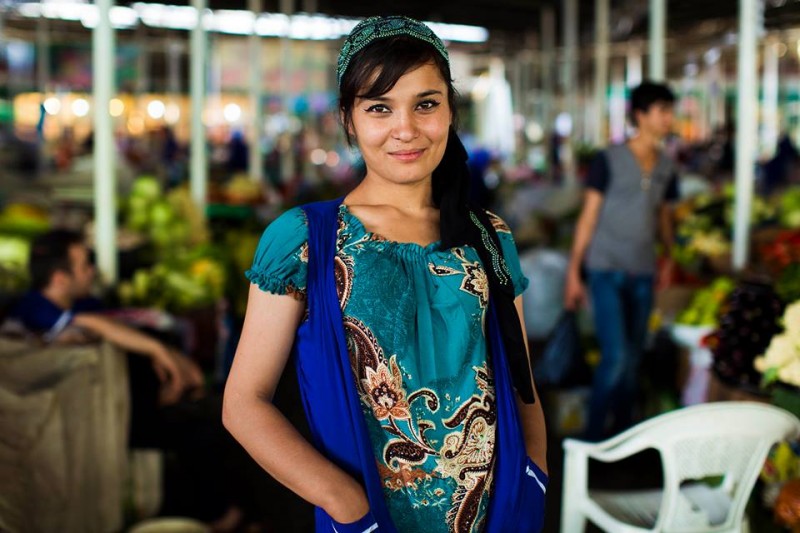 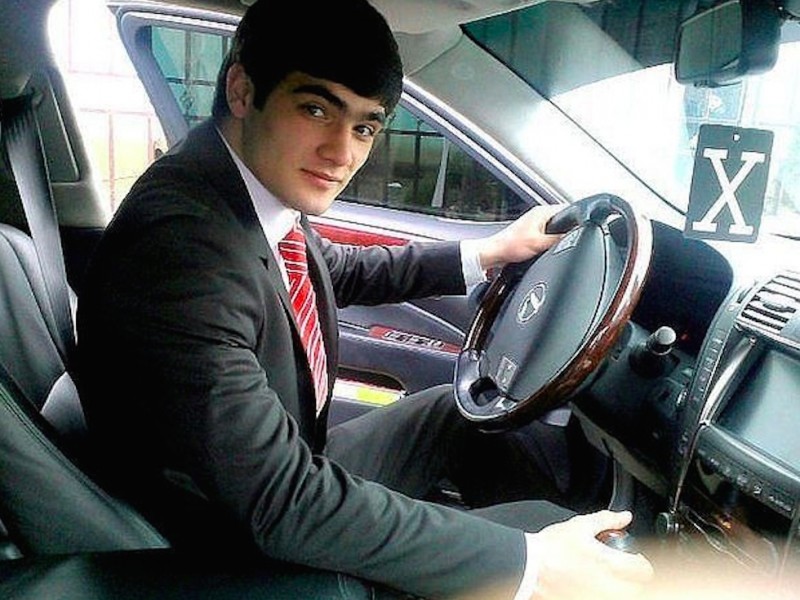 In fact, as of last year, it is as difficult to wear shorts in a government building in Tajikistan as it is in Saudi Arabia. Short skirts have long been banned in schools and are being officially discouraged in public. 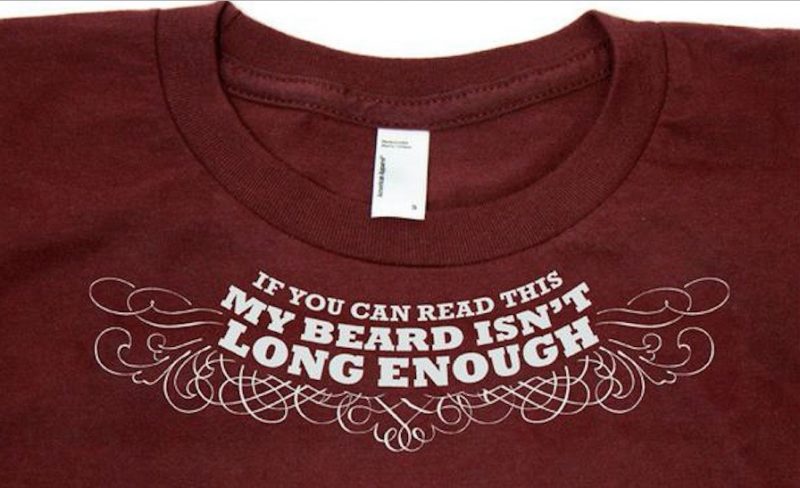 This Topatcoo t-shirt would likely be banned in Tajikistan.

Long beards are on the outs in Tajikistan. Again no law specifically bans beards but religious clerics, who set the tone for facial hair in the country, have been instructed to keep beards to a maximum length of three centimetres. What's more, Tajik police have seemingly been given free reign to forcibly shave thousands of bearded men. In a popular blog post quoted by Global Voices in 2015, blogger Rustam Gulov complained of being forcibly shaved:

They came for me too… Today, three policemen took me to Khujand police station and shaved my beard forcedly. This country does not have a future!

10. No foreign names or funny names for children. They're not funny at all! 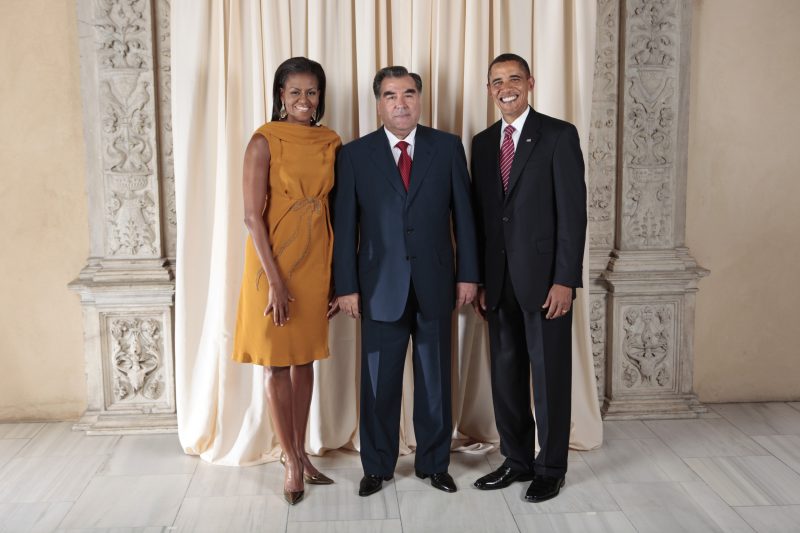 President Barack Obama and First Lady Michelle Obama pose for a photo during a reception at the Metropolitan Museum in New York with, H.E. Emomali Rahmon President of the Republic of Tajikistan, Wednesday, Sept. 23, 2009. (Official White House Photo by Lawrence Jackson). CC 2.0. While Emomali surely features in the registry of Tajik names, Michelle and Barack might not.

This law concerns citizens of the Tajik ethnic group. As of 2016, citizens have been mandated to call their children names from an official state registry. Notably the registry excludes some popular Arabic-language names, although officials said the law on names is also to prevent children being named after household objects — ‘Mop’ for instance. “John” would also be out of bounds for Tajik-speakers, according to Open Asia, which created its own questionnaire on things that are and aren't banned in Tajikistan earlier this year.

11. That goes for restaurants, too, even if they are foreign… 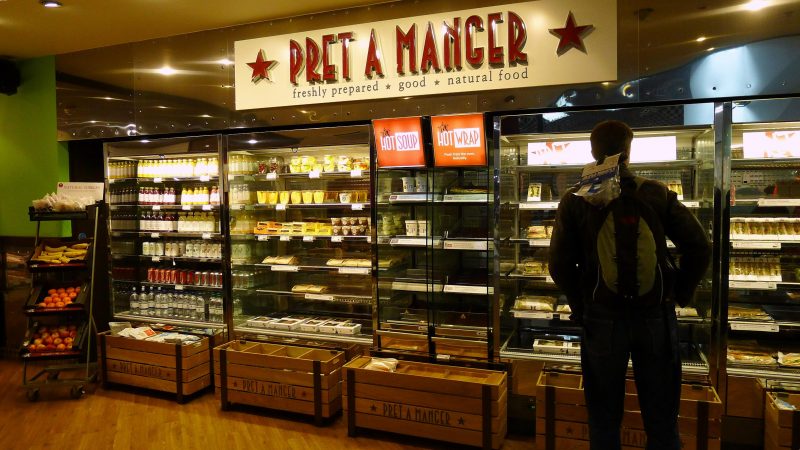 What is Pret A Manger in Tajik? Image by Zhangyang. CC 2.0

Opening an Italian restaurant in Dushanbe? Don't call it Bella Italia or something similar, as  the law on the state language mandates that restaurants must have Tajik names. In practice, this is not always the case. But Open Asia notes that a Indian restaurant called Salaam Namaste fell foul of the law and had to pay a fine of nearly $100.

12. No more boxing, cage fighting and other violent sports. Because…ISIS 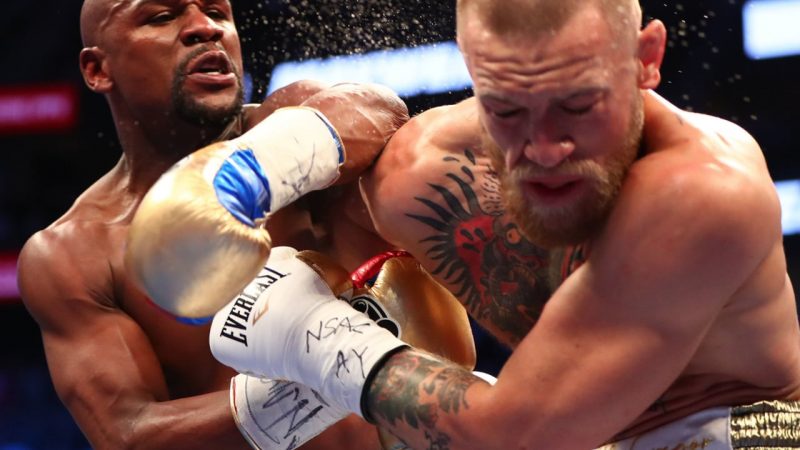 Floyd Mayweather and Connor McGregor duke it out. Screenshot from Vimeo.com.

Tajikistan's sports committee said Wednesday it is seeking to ban professional boxing and several types of martial arts in the impoverished ex-Soviet nation over concerns they promote violence and extremism.

The committee said in a statement the ban was being proposed “taking into account the (need to) prevent violence, and prevent the lowering of honour and dignity in sport.”

The ban has since gone into force, with authorities trying to introduce “gushtingiri,” a national marital art, instead. Research has indicated that violent sports are popular among some ISIS recruits. Tajik authorities say over a thousand citizens have joined extremist groups fighting in Iraq and Syria.

13. Finally, no drones, please, Afghanistan is just next door… 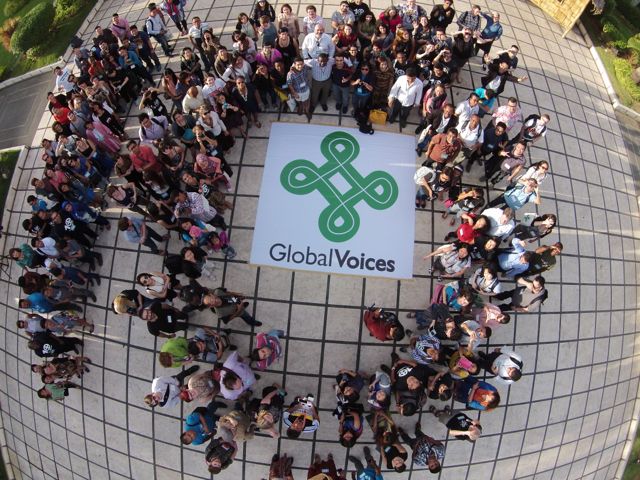 Global Voices community members from 60 countries captured by a drone. Image courtesy @ka_bino and PR Works. Taking this photograph in Tajikistan would have been legal at the time it was taken in 2015, but illegal just over a year afterwards.

Reading all of this, you're probably thinking Tajikistan is not somewhere that will allow people to fly remote-controlled objects around in the sky for no good reason. You would be right.

But Tajikistan was not among the first countries to ban drones, only getting round to a ban last year. Amendments to the country's air code “aimed at preventing flights of unmanned aerial vehicles (controlled) by terrorist organizations and drug traffickers” according to a lawmaker in the country's parliament.