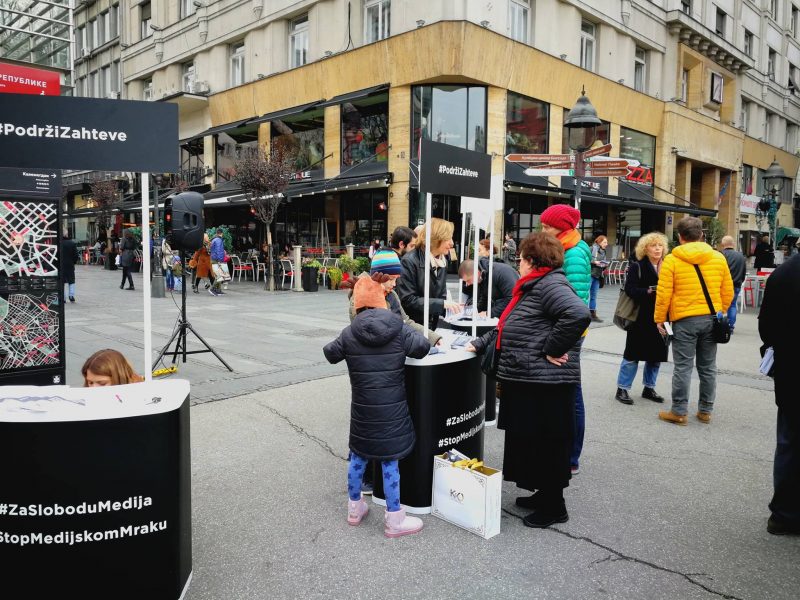 Serbian journalists and activists rallied in the streets of Belgrade and four other Serbian cities on November 19 to garner support from citizens for demands they have made to Serbian prime minister Ana Brnabic.

Street actions were organized in Belgrade, Nis, Novi Sad, Kragujevac and Vranje, where journalists and activists distributed leaflets to citizens, promoting the list of 13 demands regarding media freedoms and journalists’ safety. The list was created by the group For Media Freedom and included recommendations gathered from media and civil society organizations, journalism associations, activists and ordinary citizens.

“The most important part of the action of the group ‘For Media Freedom’ is to remind citizens that media and journalists are necessary because they cannot [live] without information,” explained Independent Journalists’ Association of Serbia president Slavisa Lekic.

Today we are at three locations in Belgrade:
– Terazije
– Trg Republike (Republic Square)
– Knez Mihailova (Ruski car)
Drop by, sign the petition for support, spread the news about #ForMediaFreedom

For Media Freedom has also asked authorities to solve all cases of murdered journalists, and to investigate recent attacks. The list included demands regarding the independence of public broadcasters, which are seen as pro-government media outlets, and for the elimination of pressures against journalists including those exercised through the judiciary.

Image: #SupportTheDemands
Tweet: Tomorrow [we are] in the new action #ForMediaFreedom in Kragujevac, Nish, Vranje, Belgrade and Novi Sad. Be with us from 12 to 15 hrs #StopMediaDarkness

Before petitioning for signatures from ordinary citizens, the journalists presented PM Brnabic with the list. She then promised to respond to their demands in ten days, without any speculations as to what kind of response might be expected.

How did the group ‘For Media Freedom’ begin?

“For Media Freedom” began as an informal group in September 2017 after a series of incidents against free and independent media occurred, including the closure of the prominent weekly Novine Vranjske [Vranje Newspaper], which had been published for more than 20 years in the southern Serbian town of Vranje.

The founder of Vranjske and former head of the Serbian journalists’ association Vukasin Obradovic went on a hunger strike on September 19 to protest the newspaper's closure, which had been subjected to political and financial pressures and also against the “decline in media freedoms in Serbia.”

Roughly one hundred journalists, editors, and activists gathered the same night in a protest known as ‘I stand with Vranjske’, showing their support for Obradovic, after which he ended his strike and joined the group ‘For Media Freedom’ and continued publishing Vranjske online.

However, Obradovic recently announced that he was unable to provide funds for journalists and contributors and that he was forced to shut down the portal vranjske.co.rs as well.

Due to inability to secure minimum conditions for work, and to provide regular payment of salaries for the regular employees and fees for the freelancers, as the owner I was forced to bring a decision to cease functioning of the portal vranjske.co.rs.

On September 28, For Media Freedom also staged a website blackout in defense of free speech, using the black screen to symbolize a world without free media.

Journalists from #Serbia & others from region (in solidarity) stage symbolic protest & ask @JHahnEU to be more vocal about the lack of media freedom in Serbia. #EUWBmedia pic.twitter.com/2MReocVeZZ

The group also organized a protest on November 9 at the recent EU and Western Balkans Media Days in Tirana, Albania by standing in black shirts with the sign #EUdoMore, asking the EU to support professional journalism in Serbia and not to ignore a deteriorating situation for Serbian media.

Journalist Tamara Skrozza, a member of For Free Media, told the panel in Tirana that the EU should do more so that “[they] could believe again in their messages that media freedom are a priority in the process of EU integration.” The panel was attended by EU Enlargement Commissioner Johannes Hahn, a member of the European Commission in charge of overseeing the accession and negotiation process of future EU member states such as Serbia.

Serbia has achieved “some level of preparation concerning freedom of expression” according to the latest EU progress report on Serbia from November 2016, but made no progress the previous year.

In the latest World Press Freedom Index by Reporters Without Borders for 2016, published in April 2017, Serbia was ranked 66th, a decline of seven positions compared to 2015. The report further specified: “Media freedom has declined ever since Aleksandar Vucic, Slobodan Milosevic’s former information minister, became Prime Minister in May 2014.”

Vucic, who is now the president and still the most powerful person in the country, is not officially against the free press, but he has effectively curtailed press freedoms by choosing several media outlets which serve as government mouthpieces and stage campaigns against opposition, independent journalists, state enemies, so that Vucic presents as a pro-EU reformer.