As Critiques of UN Peacekeeping Missions Grow, Africa Seeks Peace on its own Terms 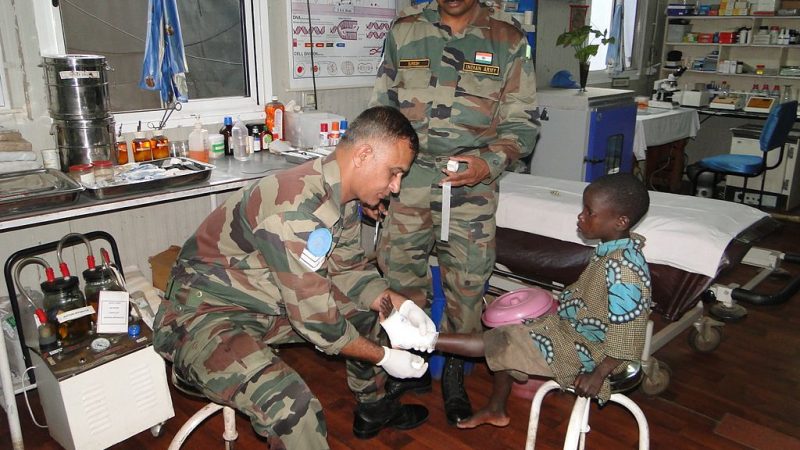 Indian military doctors attend to a child in Kiwanja, the Democratic Republic of Congo via The Blue Berets. CC BY-SA 2.0

United Nations (UN) peacekeeping missions are ubiquitous on the African continent despite growing critiques of inefficacy. Peacekeepers work in cooperation with African military troops with increasingly broad mandates including civilian protection, counterinsurgency operations, and counterterrorism, among others. UN peacekeeping missions in places like Liberia, Sierra Leone, and Côte d'Ivoire have been hailed as successes, yet UN troops’ ground activities on the ground have been heavily questioned.

Since the first mission in 1948, UN peacekeeping missions have evolved drastically but the main goal has always been disarmament demobilization and securing peace on the ground. By May 2015, 80 percent of UN peacekeepers were deployed on the African continent (80,000 troops) to take part in nine UN peacekeeping missions. Bangladesh, India, and Pakistan have sent the most troops on these African missions, while the United States, Japan, and France have been the top funders.

UN peacekeepers, also known as ‘Blue Helmets,’ have served as observers as well as soldiers, sometimes engaging in combat without a government's consent. Former UN Secretary-General Kofi Annan mandated reforms aimed at improving UN peacekeeping mission efficiency with broader responsibilities, including the use of force.

A 2014 Human Rights Watch report claimed that UN peacekeepers and Congolese forces failed to prevent an attack in the Democratic Republic of Congo (DRC) that left at least 30 civilians dead. In the Central African Republic (CAR), African Union peacekeepers were implicated in the disappearances of 11 people in 2014. French peacekeepers were also under investigation in CAR for sexual assault. France opened an investigation, but prosecutors later dropped the cases saying there was not enough evidence to charge the soldiers.

Paula Donovan, co-director of AIDS-Free World, reacted to the news:

This is a travesty. If African soldiers had sexually abused little boys in Paris, the investigation wouldn’t be closed until every perpetrator was behind bars.

In a March 2017 speech to the UN, DRC president Joseph Kabila requested a significant reduction of UN peacekeepers on the ground. He argued that their presence was pointless and impeded the Congolese administration's ability to take action. Current UN Secretary-General António Guterres saw Kabila's statement as an opportunity for him to tighten his grip over the DRC and crackdown on public dissent. Yet, according to Pierre Okungo, a Kinshasa politician, a substantial reduction of UN peacekeepers on the ground in the DRC could lead to possible implosion and destruction.

In Kofi Annan's memoir Interventions: A Life in War and Peace, he laments the lack of coordination and awareness between the UN and central governments in conflicts in Somalia (1992) and Rwanda (1994). In the case of Rwanda, the UN did not enact an intervention on the ground until a year after the civil war began, due to a lack of information and coordination on the reality of tensions after the 1994 elections.

The situation in the Sahel challenges us all. The sense of sacrifice [of 3 Chadian peacekeepers of the UN Mission in Mali, killed on 26/10/17]  compels us to urgently find solutions to counter terrorism in Mali, while ensuring the security and safety of United Nations Multidimensional Integrated Stabilization Mission in Mali (MINUSMA) contingents.

The African Union currently cooperates in South Sudan, where the demise of the central state has made UN missions on the ground extremely complicated.

To leaders such as Joseph Kabila (DRC) or former Chadian president Hissene Habré, the Blue Helmets are seen as “inefficient interferers” only serving westerns interests. African countries working to build their own peace seek the continuance of foreign aid, not a foreign military presence on the ground. This may mitigate wasted resources taken by UN peacekeeping missions in Africa who bring ill-prepared soldiers. Many voices have opined that it is time for the African continent to lead the peace-keeping efforts in the region:

For example, in Somalia, AMISOM (African Union Mission In Somalia) member states provide troops while the UN provides funding, training, logistics, and planning support. Since the establishment of the AU’s Peace and Security Council, the AU has authorized over 64,000 peacekeepers to missions on the continent including fights against the Lord Resistance Army in Central Africa and Boko Haram in Nigeria.

Over the last few decades, UN troops on the ground have kept many countries in conflict from falling into total disarray. Yet, myriad conflicts still persist in Africa and the threat of terrorism is at an all-time high. UN peacekeeping missions are crucial to African development and security and UN agencies like the United Nations Human Rights Commision (UNHCR) deploy important funds (US$ 7.7 billion annual fund in 2017) to mitigate civilian crises on the ground.

At the same time, however, Africa continues to seek strategies to secure peace and stability on its own terms.