Screenshots from the videos depicting the fainting incidents involving the supporters of Aleksandar Vučić and Nikola Gruevski.

Both politicians belong to populist, conservative political parties. In fact, ruling Serbian political party SNS and Macedonia's VMRO-DPMNE are “sister parties” within the “family” of the European People's Party.

Both Vučić and Gruevski have been dogged by corruption allegations and faced mass protest movements against their rule.

And on multiple occasions both have seen attendees to their meticulously stage-managed public appearances faint.

On September 5, the new Macedonian government marked one hundred days in office. Prime Minister Zoran Zaev made the customary speech [1] noting the accomplishments, while Gruevski, the chief of opposition party VMRO-DPMNE, held a counter-press conference [2] blaming the prime minister for various debacles.

It would have had been just business as usual on the Macedonian political scene, if it weren't for an incident at Gruevski's press conference that monopolized the public's attention.

At one point, a youth standing behind him fainted, but Gruevski, seemingly unaware, continued his speech, and none of his subordinates tried to interrupt the speech by helping the young man who fell to the ground.

A clip filmed with a mobile phone off a TV screen quickly spread over social networks; it currently has more than 170,000 views at the moment of writing of this post.

The clip was mainly shared by people who dislike Gruevski, who said it highlighted the lack of empathy within VMRO-DPMNE, which ruled Macedonia from August 2006 to May 2017. Many also recalled other cases in the past when the party had shown little concern for its individual members.

For instance, some recalled the death of Martin Neshkovski [3], killed by Gruevski's bodyguard while trying to celebrate the election victory in June 2011. Others remembered Sedad Asanovski [4], who died in a traffic accident while traveling to a party rally in November 2016. After a random car hit him, his party colleagues left his dead body on the road and departed [5], because their party-chartered bus had to arrive at the rally on time. The family claimed no one from the party contacted them afterward. 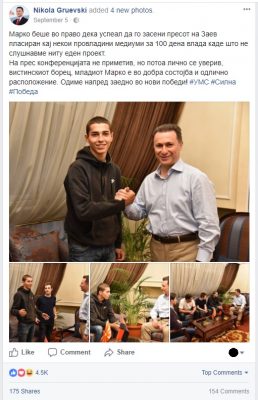 Screenshot of Gruevski's Facebook post [7] in which he praises the young man who fainted for disrupting the media coverage of government press conference.

To counter the impact of the incident, Gruevski published a Facebook post with photos [7] that showed he later met with the young man who fainted, identified as Marko, to make sure he was all right. The tone of the post was celebratory, and received hundreds of likes and praising comments:

Marko was right that he succeeded in overshadowing Zaev's press conference broadcast bу some pro-government media, on the occasion of 100 days of the government, where we didn't hear about any projects.
At the press conference I didn't notice, but later I personally verified that the true fighter, young Marko, is in good condition and excellent cheer. We go forward together to new victories! #UnionOfYoungForces #Strong #Victory

Soon after, people who saw the face of the young man identified him [8] as a participant in other stunts sanctioned by Gruevski's government while in power. Journalist Borjan Jovanovski said he recognized him as the man who was sent to spit on him in public [9], accompanied with a camera crew in March 2017. Members of the Student Plenum said they recognized him as one of the men who, accompanied by bodyguards and protected by police, stole ballot boxes during student elections [10] in June 2016.

You remember the kid who fainted behind Gruevski? Here he's riding a bike with Koce [Trajanovski, the incumbent major of Skopje who run for the third term on the VMRO-DPMNE ticket.]

Gruevski's gloating and Marko's alleged previous involvement in high-profile political stunts aroused suspicions about the nature of his fainting.

In Serbia, ‘time to faint!’

Two similar incidents happened in Serbia this year involving a man from the audience fainting during a live interview with Aleksandar Vučić on a friendly TV channel.

The first took place on 31 March, in a talk show on Happy TV. The then prime minister was relating tales about odd jobs he did as a teenager before receiving a state scholarship “without connections” for which he was grateful to the state. When the young man fainted, Vučić got up to help him, and even berated his bodyguards for not jumping in sooner.

It wasn't the first time Vučić was publicly in the role of rescuer. In February 2014, while he was deputy prime minister, he appeared in person on a snowed-in motorway near Feketić in Vojvodina. He was then filmed while carrying an ethnic Albanian child [13] from its bus to an army helicopter. The footage was then rerun by Serbian media, framed as a proof of his humanity and generosity.

The fainting moment created big social media buzz. The young man who fainted gave a short media statement [14] saying that the incident was not a set-up. He added that he didn't suffer further health consequences, and that generally he's not interested in politics.

He's not interested in politics, only in sports. He was accidentally chosen to applaud politics. And then, the healthy athlete fainted!
Only lies and deceptions around [Aleksandar Vučić]

Popular doubts about the authenticity of the incident became part of Serbian protest culture. In the spring, students and others protesting against corruption repeatedly chanted “Time to faint!” and at times hundreds of people would hit the ground [17].

The second fainting incident behind Vučić took place on 4 September, a day before the Macedonian incident. This time, the talk show was not interrupted. The interview with a friendly journalist continued:

Serbian social media users continue to comment about the fainting incidents. For instance, after Vučić had an interview in early November, one Twitter user wrote:

How come Vučić gave an interview with nobody fainting?