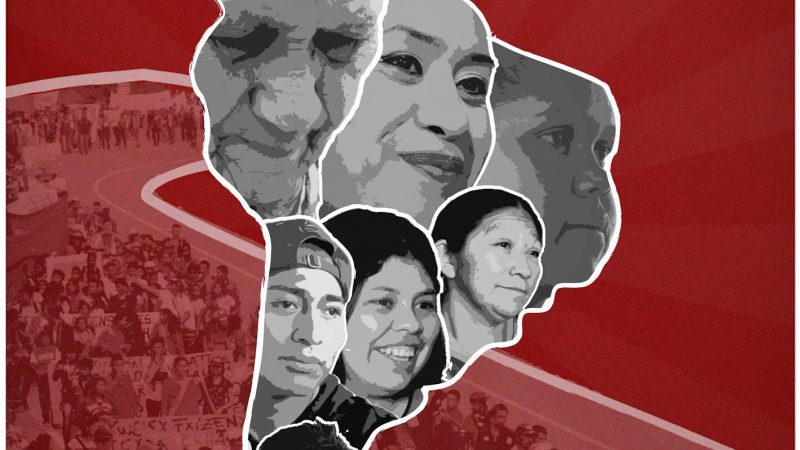 Poster details of the film “Education in motion”. Image shared publicly on Facebook.

After “500 days of travel and filming, 300 hours filmed, and six months of editing”comes the debut of the long-awaited feature-length documentary “La education en movimiento” (“Education in Motion”). The film follows the almost three years of hard work and adventures of two Argentine teachers, Malena Noguer and Martín Ferrari, as they journey throughout Latin America to document and analyze popular education projects developed in the heart of “Nuestramérica,” (“Our America”) as they like to call it.

Last year, Global Voices published two articles on Malena and Martín’s Education in Motion initiative, in which they visited educational projects that had emerged “from below” and that break with established norms. The final goal was to stitch all the material into a documentary that would be freely distributed.

In our first article, we presented the project, its protagonists and their incredible journey, as well as the first short clips published out of Argentina, Bolivia, and Peru. A second article followed with new information about the trip and more educational projects from Colombia and Ecuador. All of the clips and edited interviews along the way can be seen on their website or YouTube channel, freely accessible for educational, debate, and reflection purposes. 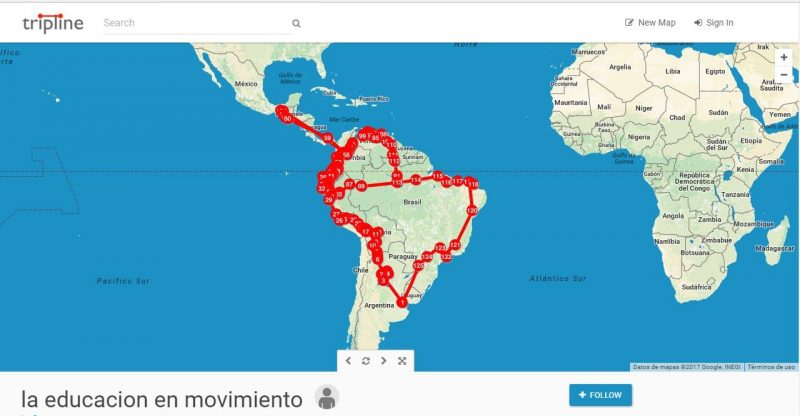 The travelers shared their journey on this interactive map. Photo shared publicly on Facebook.

The documentary was previewed on November 10 at the Gaumont Cinema, a well-known cultural reference point, located opposite the Congressional Plaza in Buenos Aires, that today belongs to the National Film Institute and Audiovisual Arts (INCAA) of Argentina. The official premiere will be in April 2018 and will be part of the programming of the 11th Argentine Documentary Film Festival.

This short video below gathers images and impressions from the first six months of Malena and Martín’s journey, and it is an opener of what will be the finished documentary:

This ambitious project was made possible thanks to the collaboration of many people, family, friends, colleagues and private donors interested in financing their production, as well as each of the groups and movements that offered their hospitality and support to the travelers. INCAA financed the last stage of editing, which allowed the documentary to be finished early.

The young filmmakers’ excitement is palpable in their posts on Facebook page:

We present to you the film!
Here you can see its colors, its music
Its protagonists, its stories, its struggles

It's coming… the pre-release!

More clips from the trip: Bolivia and Brazil

During their visit to Bolivia, Malena and Martín had the opportunity to visit the beautiful city of El Alto, at an altitude of more than 4,000 meters in the western region of the country. There, they got to know the Wayna Tambo Youth House of Cultures, a space for meetings and communication that aims to:

contribute to the recreation and consolidation of youth identities from an educational, cultural, and communicative intervention, with an approach that simultaneously works for the invigoration of the Andean-Aymara singularity and the strengthening of cultural diversity in equity and justice.

The house, which has more than 20 years of history, is part of the Diversity Network, has “an intercultural community radio station” that offers a space for workshops and books, musical bands, and to debate film presentations.

The journey of more than 1,000 kilometers from the south of Venezuela took them to Ceará, among the northeastern Brazilian states that are experiencing one of the worst droughts of the last century, which has been going on for six years. There, in the Lagoa do Mineiro settlement, is the Francisco Araujo de Barros Field School of the Landless Rural Workers’ Movement (MST), which is fighting “for an education from the countryside and for the countryside.”

Malena and Martín present the school and the principles of the movement in this clip titled, “Parir-nos en la lucha: Generaciones que hacen escuela” (“To be born into struggle: Generations that build an education”):

The people know very well that the school is here, conquered by the struggle, it is in struggle and lives in struggle. It is a school that lives permanently in the movement. This school has reference to changing its pedagogical curriculum at any time. It will depend on the needs of the working class.

Education in Motion is a self-managed and collectively financed project that used the support of individuals and institutions. You can follow them on Facebook, where they post photos and anecdotes about the people they have met along the way, and on their YouTube channel.