Another Muslim Man Is Murdered in India's Rajasthan by Cow Vigilantes 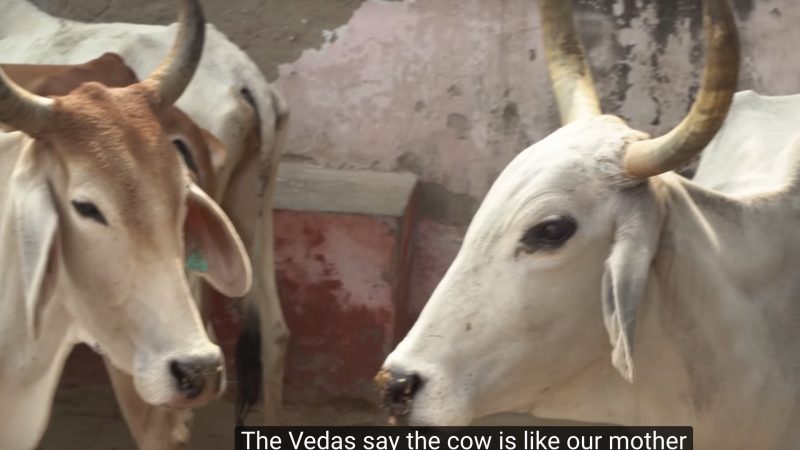 Screenshot from YouTube video on Gau Rakshaks by 101 India

With cow vigilantism seemingly on the rise and hardline Hindu nationalism taking root in India, hooligans calling themselves “Gau Rakshaks” (“Cow Protectors”) shot a Muslim man to death who they accused of smuggling cows.

The murder of Umar Mohammad in Rajasthan's Alwar district on November 10 was yet another instance of India's Muslim community facing targeted violence.

Several states in India have regulations prohibiting either the slaughter or sale or migration of cows. The Indian state of Rajasthan bans both cow slaughter and export or migration of bovine animal for the purpose of slaughter is also prohibited. However, according to reports, Rajasthan, especially the cities Alwar and Bharatpur, are one of the biggest contributors of smuggled cattle to slaughterhouses in different states of India.

Umar Mohammad's wife told the media that she had asked her husband to purchase the cows not to slaughter, but to have a regular supply of milk to feed their eight children and aging parents — which is legal.

Many Hindus consider the cow sacred and a symbol of life, and therefore do not eat it. India also has a significant population of other religions whose adherents generally do eat beef, including Muslims. In the current climate, this fact has increasingly become an excuse for communal attacks against Muslims.

‘Gau Rakshaks are a collective blot on our country, history and memory’

While the culprits have been arrested, as reported by international newswire Reuters, the ground realities remain unchanged. Since 2015, after right-wing Narendra Modi became prime minister, there has been a surge in cow vigilante violence attributed to the rise of Hindu nationalism in the country, ushered in by his election victory.

The term Gau Rakshak has slipped into the country’s lexicon of politics and culture over the past two years, in step with increasing activism by self-styled protectors and vigilante groups.

Many such vigilante groups are springing up across India and there is even a federation of cattle protectors called Bhartiya Gau Raksha Dal (Indian Cow Protection Organization).

#AlwarLynching GauRakshaks are a collective blot on our country, history and memory. Feel silenced and helpless that these killings persist

In a citizen video by online youth-focused content portal 101 India, Doctor VC interviewed some of these Gau Rakshak teams:

After talking with a leader of a Gau Rakshak team, Doctor VC comments in the video:

They held on to their religious belief (about cows) so rigidly, it made me feel uncomfortable even though I am a Hindu.

When he went to the Ramgarh police station to ask about the Gau Rakshaks, the officer in charge said that Gau Rakshaks mainly act as police informants and are not supposed to take the law in their own hands.

‘This is not something Mahatma Gandhi would approve’

Indian authorities should promptly investigate and prosecute self-appointed “cow protectors” who have committed brutal attacks against Muslims and Dalits over rumors that they sold, bought, or killed cows for beef, Human Rights Watch said today. Instead of taking prompt legal action against the vigilantes, many linked to extremist Hindu groups affiliated with the ruling Bharatiya Janata Party (BJP), the police, too often, have filed complaints against the assault victims, their relatives, and associates under laws banning cow slaughter.

This, in turn, elicited response from Prime Minister Narendra Modi in July, who said:

Killing people in the name of ‘gau bhakti’ (love of cow) is not acceptable. This is not something Mahatma Gandhi would approve.

But, many Indians believe the prime minister's words didn't go far enough, given what other high-profile figures have said, like the joint general secretary of the Hindu nationalist Vishwa Hindu Parishad:

If the sentiments of the majority community are respected, there would be no such incidents. Can we demand pork in any Gulf country?

A recent report by Reuters highlighted how in addition to the violence, cows have been stolen from Muslim families and redistributed to Hindu families, thereby further exacerbating the economic divide.

Muslims account for 14 percent of India's 1.3 billion population and were granted equal rights under India's constitution after the partition of India and Pakistan in 1947. While Pakistan became a homeland for Muslims and thereby an Islamic state, India's founding fathers including Jawaharlal Nehru and Mahatma Gandhi emphasized the country's democratic and secular credentials that guaranteed equal rights to all citizens irrespective of caste, creed or religion.

But, rising instances of nationalism fueled by abject disregard for rule of law has created a dangerous situation for minorities in India.

According to data from Indiaspend, a data journalism portal in India, nearly 86 percent of those killed in cow-related violence were Muslim and 97 percent attacks have taken place after 2014. Modi won the elections in May 2014.

Data further states that in 13 percent of the cases, police register cases against the victims. News reports suggest police officials have used the same method to highlight cases against Umar Mohammad after his death.

‘Violence has only strengthened violence…while the administration cheers on’

On June 28, 2017 thousands of people from all walks of life turned out in the streets across India to protest against the attacks on Muslims, waving placards containing messages like “Not in My Name” “Stop Cow Terrorism” and “Stand Up to Hindu Terrorism”. The protests followed the death of a 16-year-old boy accused of carrying beef on a train. 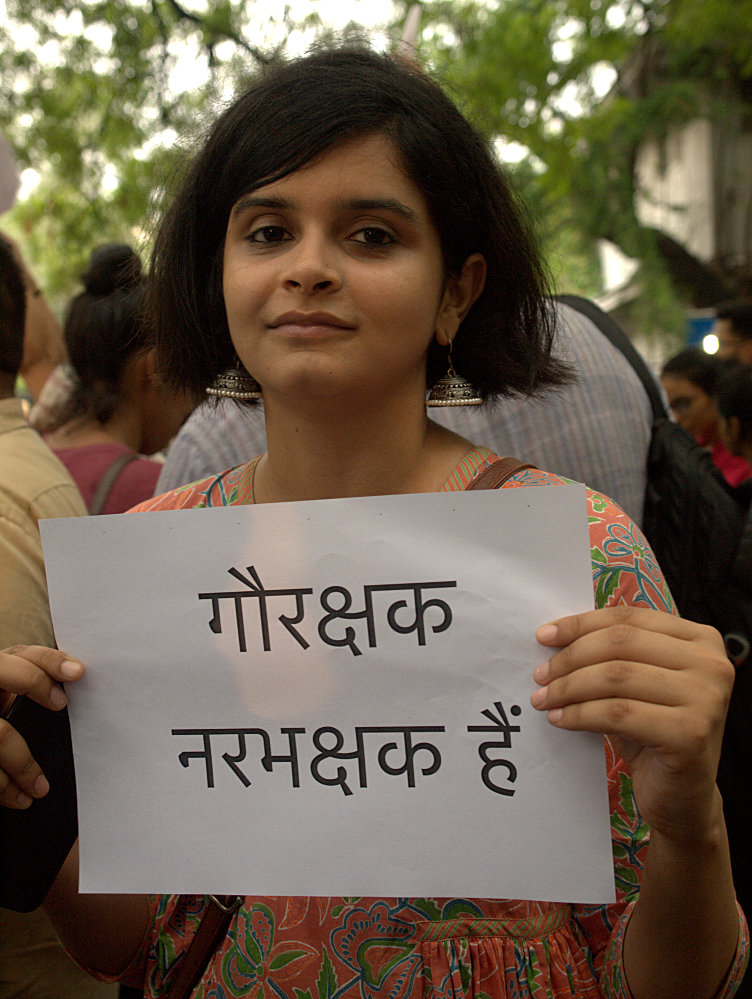 On June 28, 2017, thousands assembled in many places across India to declare that the many recent killings of Muslims were NOT IN MY NAME. Claiming to protect cows, Hindu right-wing vigilantes have been lynching Muslims. The card which this young woman is holding says, bluntly, COW PROTECTORS ARE MAN EATERS. Image from Flickr by Mukul Dube. CC BY-SA 2.0

There were also some protests following the murder of Umar Mohammad (mistakenly referred to as “Umar Khan” in the following tweet).

On Scroll.in, Ipsita Chakrabarty argued that the situation was only getting worse:

In Alwar in particular, the political acquiescence that accompanied Pehlu Khan’s lynching has emboldened murderous bullies. For instance, when activist Harsh Mander tried to take his Karwan-e-Mohabbat or Caravan of Love to Behror, the site of the lynching, they received threats from right-wing groups. When they pressed on, protesting crowds gathered at the spot as the local police claimed they were helpless to stop them. Never mind contrition, violence has only strengthened violence in Alwar, while the administration cheers on.

This is what the Hindutva radicalism has unleashed in India. And the loony Hindu Right wing will justify such nauseating murders. Shame!

In July, India's Supreme Court suspended a nationwide government ban on sale and purchase of cattle for slaughter. The ban would marginalize Muslims and the scheduled castes and tribes in the country and would harm the beef and leather industry, which employs millions of workers.

As debates around hyper-nationalism, religious zealotry, and bigotry intensify in India, it is the minorities who are facing the brunt of inhumane attacks over cow-protection, time and again.