With a Little Help From Humans, the Caribbean's Birds Are Attempting a Post-Hurricane Comeback 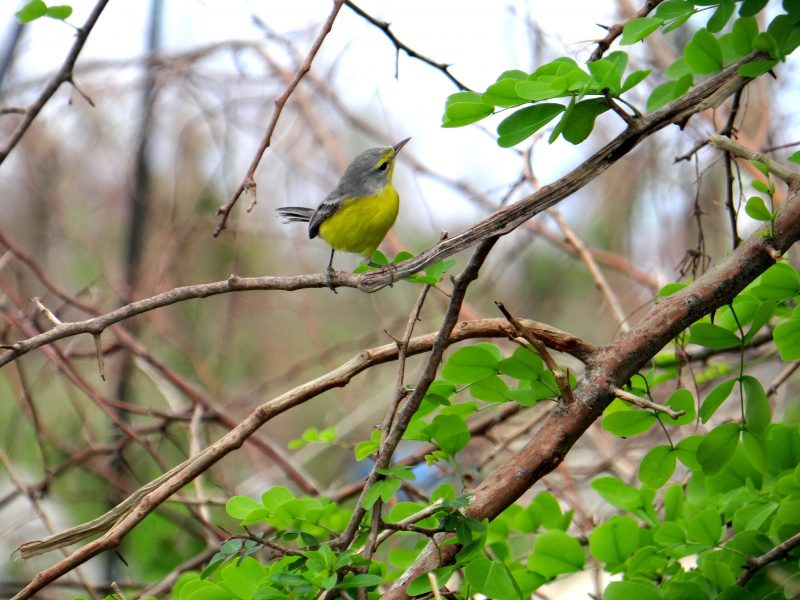 One Barbuda Warbler that was spotted after the passage of Hurricane Irma. Photo by Andrea Otto, used with permission.

2017 has been a highly stressful Atlantic hurricane season for the Caribbean. Enduring the storms themselves, however, was only the beginning. The road to recovery is often painfully slow, a process that has been as tough for not only residents, but also the region's hugely diverse bird population.

There are over 500 species of bird in the Caribbean, including over 100 species that live on only one island. The hurricanes destroyed the birds’ habitats, making food more difficult to find.

And many of the local humans who normally would work to protect them, such as conservationists and scientists, lost valuable equipment as well as the roofs off their homes. Numerous challenges remain, especially on the islands of Dominica, Barbuda and Puerto Rico. 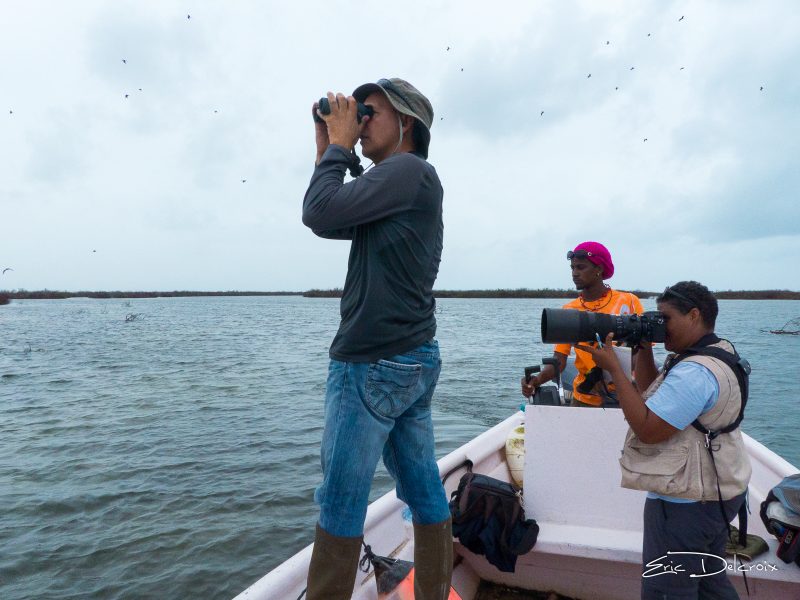 Scientists from Guadeloupe conduct a bird count at the colony of Magnificent Frigatebirds, Codrington Lagoon, Barbuda. Photo by Eric Delcroix, used with permission. 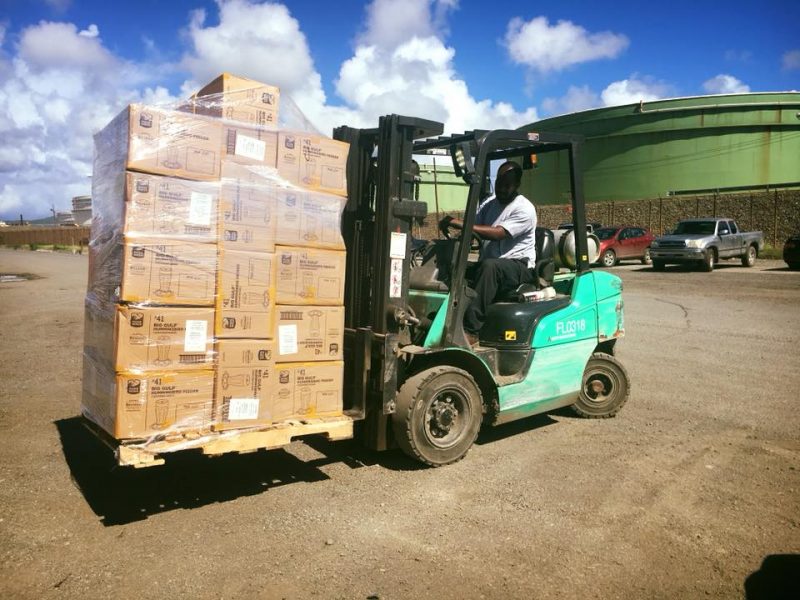 Soon, one of the most coveted items in bird-loving regional territories turned out to be hummingbird feeders. Les Fruits de Mer, an environmental group in hurricane-battered St. Martin, tweeted:

At lunchtime on Thursday, people were lining up at Sky’s the Limit restaurant in Grand Case. But unlike most days, these people hadn’t just come to eat local barbecue. They came to get bird feeders so they could take care of the birds around their homes. In less than an hour, the Les Fruits de Mer association gave away over 80 bird feeders. 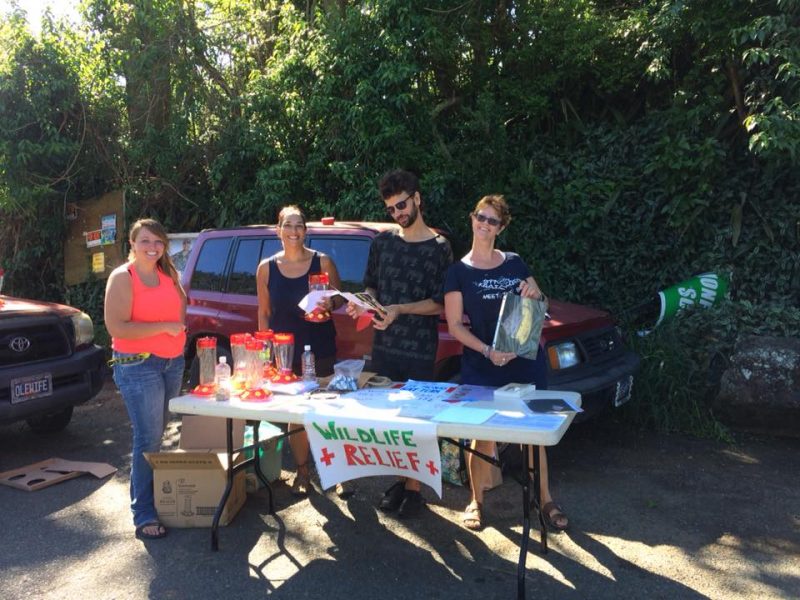 In St. Thomas, U.S. Virgin Islands — another island that suffered considerable ecological damage from both hurricanes — a Wildlife Relief stand was doing brisk business over the weekend. They also shared on Facebook:

The story behind the seeds & feeders: our native wildlife across the Caribbean took a severe blow from the storms. Like us, the birds and bats can’t go to the next island to get food and shelter, because those places were devastated too. BirdsCaribbean, a non-profit that works to conserve native Caribbean birds, raised funds and are shipping seeds and feeders to TEN Caribbean islands to help native birds! The logistics have been challenging, to say the least! The St Thomas Bat Team stepped up to volunteer to distribute the relief supplies on St Thomas. Yes, it’s a little late, but the birds really do still need the help! Come get your feeder this weekend!

The St. Croix Environmental Association in the U.S. Virgin Islands was pleased to receive their shipment and advocate for the bat population as well:

The bats at the Barren Spot Bat Tower at the Bat Conservation Site and throughout the territory are struggling from lack of food. Hurricanes Irma and Maria wiped out most of the fruit growing on our plants and trees! You can help these fruit eating bats by hanging fruits like bananas, papayas, mangoes or whatever you can find. Make sure you hang the fruit out of reach of cats and mongoose so they can't reach the bats! Bats are a key component to forest restoration. #BatWeek 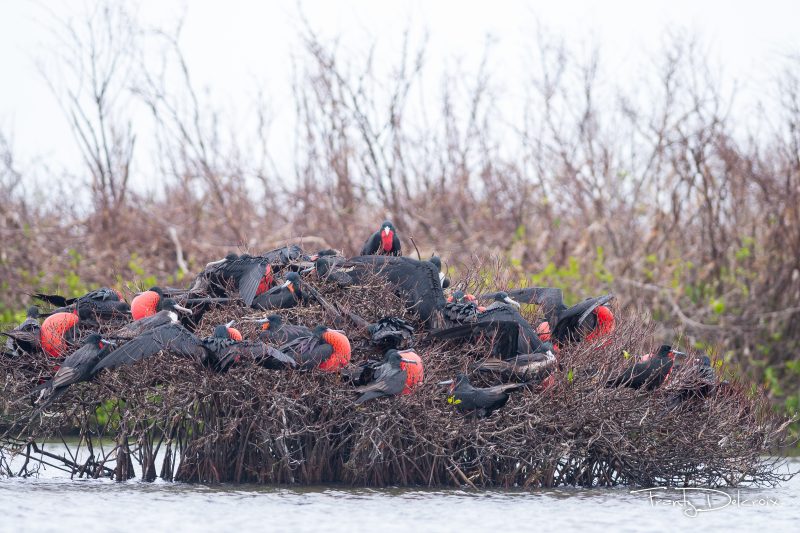 Magnificent Frigatebirds in a devastated mangrove lagoon on the island of Barbuda. Photo by Eric Delcroix, used with permission.

So how are the birds doing? Many Caribbean bird species, with their limited habitats and continuous encroachments from tourism and other developments, are already endangered, including Dominica's endemic Imperial Parrot, the beloved Sisserou, the iconic national bird portrayed on the island's flag. The eye of Hurricane Maria — a Category 5 storm — passed directly over the tiny island, causing immense damage.

Birds Caribbean reported that it sent binoculars, cameras and other tools to help the island's forestry department, which “lost everything in the storm,” search for the Sisserou. Fears of the bird's possible extinction on social media were thankfully premature, as the usually secretive and sparsely scattered parrot was since spotted:

BRILLIANT news: First confirmed sighting of the #Sisserou on #Dominica!!!! Spotted at Morne Saint Mary south of Roseau, thanks to Stephen Durand (Dominica Forestry) for sharing this wondrous news! pic.twitter.com/fKO8xD4Snj

Dominica's Red-Necked Amazon Parrot has also refused to play dead. One blog (subtitled Caribbean Nature in the Age of the Superstorm) reported:

A new video and photo debuted today, courtesy of Machel Sulton of the Dominica Forestry, Wildlife, and Parks Divison, featuring a Red-necked amazon being rehabbed post-Maria. The bird looks good!

Puerto Rico, clipped along its north coast by Hurricane Irma and then traversed from south to north by Maria, continues to fare very poorly, with the birds struggling alongside humans. The El Yunque National Forest was especially badly damaged and remains closed, and the fate of another precious parrot, the critically endangered Puerto Rican Amazon (Iguaca), hangs in the balance.

Sad news from our colleagues at El Yunque's #iguaca population. Most of the relict pop remains unaccounted for. Rio Abajo pop is up to at least 92 wild iguacashttps://t.co/YkfY2LBN26

Puerto Rico has just received 2,000 pounds of desperately needed seed and 800 feeders, and according to Birds Caribbean, eight other islands are picking up their seed and should be getting their feeders this week.

And what of the tiny island of Barbuda? Its human inhabitants, who were evacuated post-Hurricane Irma, are now uncertain about their future, fearing political exploitation and economic opportunism:

Unaware of island politics and humans’ anxieties, the tiny, endemic Barbuda Warbler (listed as “near threatened”) was spotted by local conservationists some two weeks after the storm, prompting much celebration. Since then, a team of scientists from Guadeloupe joined colleagues from the United States, Saint Lucia and Antigua to conduct a survey funded by Birds Caribbean. 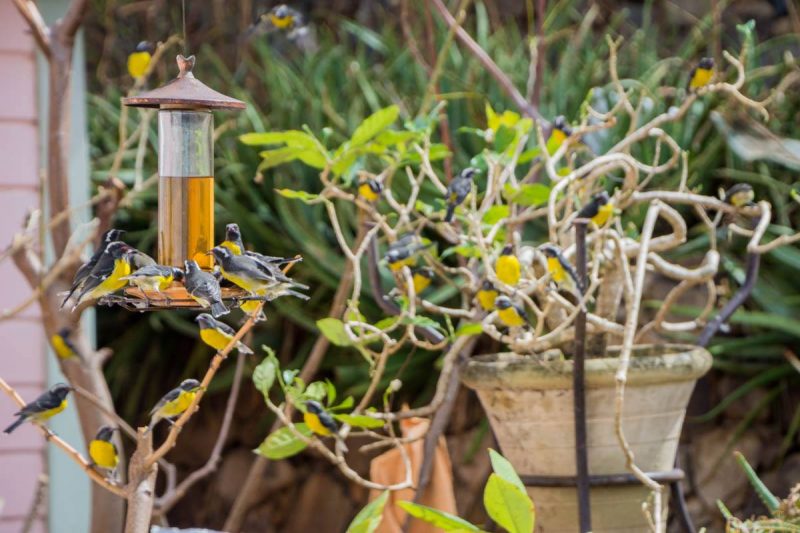 In a series called Irma's Island, the blog of Les Fruits de Mer in St. Martin suggested that the path of recovery depends on humans to make the right decisions:

As nature takes her path to recovery, we have an opportunity to influence the future. We can plant native trees and protect natural spaces or we could destroy them. How we participate in the process is up to us.

In another blog post, Tom White, a biologist with the U.S. Fish and Wildlife Department in Puerto Rico, noted that Puerto Rico’s rainforests are already starting to “green up” — and while it's frustrating to see bird populations “get knocked back to such a low level in a day” after decades of trying to build them up, he added, “If you give up, the hurricane wins. And we’re not going to let that happen.”

So, is there a lesson to be learned in the aftermath of the storms? Caribbean birds can be just as resilient as humans. And humans are fighting back, too.