The Winner Is: Same Sex Marriage Equality in Australia 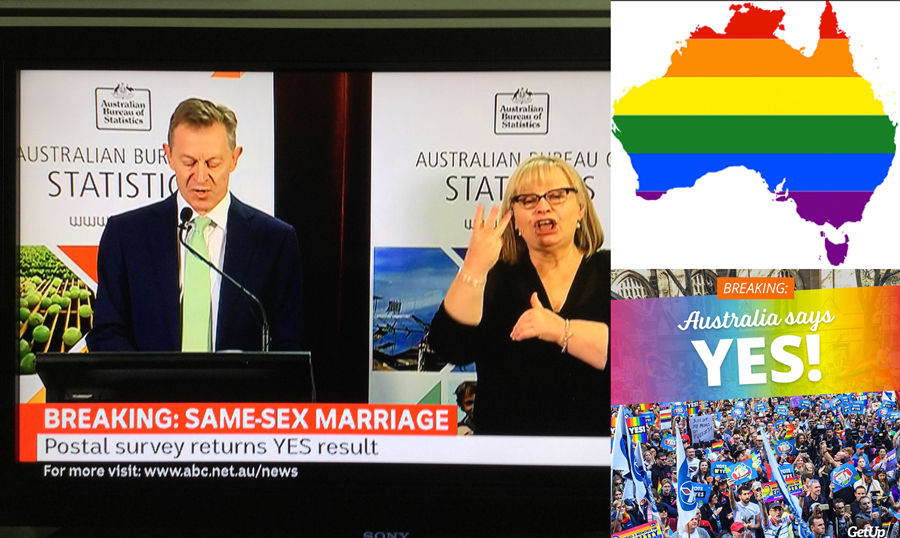 A total of 61.6% said ‘yes’ to the postal survey question: ‘Should the law be changed to allow same-sex couples to marry?’.

There was much rejoicing all round, especially on social media:

This all happened because of you.

We did this together. pic.twitter.com/4vWuIj9bpB

First bloody vote result in years that made me feel like reasonable, kind, compassionate people are still the clear majority. Thank you yes voters #marriageequality

Despite the government survey being voluntary, 79.5% of registered voters took part. Voting in Australian elections is normally compulsory with a turnout of approximately 90%.

Changing the Marriage Act is up to parliamentarians and does not require constitutional amendments. After the Senate rejected a bill to hold a compulsory plebiscite, the government decided to use administrative measures to conduct a voluntary, non-binding postal survey. The budget was $AU 122 million (about 95 million US dollars).

However, most lesbian, gay, bisexual, transgender and intersex (LGBTI) activists opposed this process as unnecessary, costly and promoting homophobia. Liam Esler posted some reasons for his anger on Twitter in August:

Australia is a secular nation, where the most common religion is none. We are not in the year 1900. Marriage is a legal vehicle, not a religious one.

For those who say religion is a voice that should be heard, religious leaders and people in Australia have had their say many, many times. Despite this, a clear majority of Australians, based on polling data, support marriage equality. Polling is far more accurate and fair than any postal vote (which favours those over the age of 50, coincidentally the demographic most likely to vote against marriage equality).

I've been with my partner for over ten years. Frankly, I'm tired of having my legal and civil rights debated by people who tell me my sexuality is a choice and that I'm going to hell for something I can't control.

For the next three weeks all I'm going to see every day is people telling me how disgusting I am, how unnatural my relationship with my partner is, how my identity is THEIR business to preside in judgement over. The suicide rate for LGBTQI+ people will rise, as it has every time these issues come up. It causes real damage.

In particular, it was regarded as harmful to members of their community, especially their mental health. Anti-vilification legislation was passed to try to lessen homophobic hate speech during the campaign.

Mental health was a recurring issue:

SCH proud to be part of a Comm that stands for equality for all. Now a speedy resolution to what has been a harmful debate.#MarriageEquality pic.twitter.com/UAq7TbTGI3

The plebiscite had been the policy of Prime Minister Tony Abbott, a conservative and Catholic, before he was deposed by fellow Liberal Party member of parliament Malcolm Turnbull in 2015. Despite his open support for same-sex marriage, Turnbull continued with the idea as a way of placating the right-wing members of his coalition government. It was widely seen as a stalling tactic of the Christian conservatives. The Labor party opposition and the Greens supported a free vote in parliament.

Abbott was a major figure in the ‘no’ case. After the result, many remembered his role:

This pleases me greatly especially after Abbott claimed that a 40% no vote in the marriage law postal survey would be a “moral victory”. Would still love to see that no side shrink further! https://t.co/uMu2R6GvFM

David Marr, a veteran journalist and longtime critic of Abbott, has ignited lots of Twitter joy:

“For old men like me this is another step on a once-unimaginable journey”. Watch the moment David Marr and his partner Sebastian Tesoriero heard the result https://t.co/Dw5XMoFLXF #MarriageEquality #AustraliaSaidYES pic.twitter.com/d0czYRcjaB

So has Penny Wong, Labor leader in the Senate, who came out in 2002:

All that remains is for federal parliament to pass legislation, which is almost a certainty. The only wrangling may involve conservative proposals to roll back anti-discrimination laws over religious and conscientious objections. The new law is expected to be passed by parliament before the end of the year.

Her role in the campaign will be long remembered. In 2012 Magda came out on national TV with the intention to “supercharge the case for marriage equality”. It had immediate impact:

After their online breakdown during the 2016 National Census, the Australian Bureau of Statistics has redeemed itself somewhat by spending only $AU 100 million (76 million US dollars), well under budget.

Wikipedia has a detailed background in the Australian Marriage Law Postal Survey article. 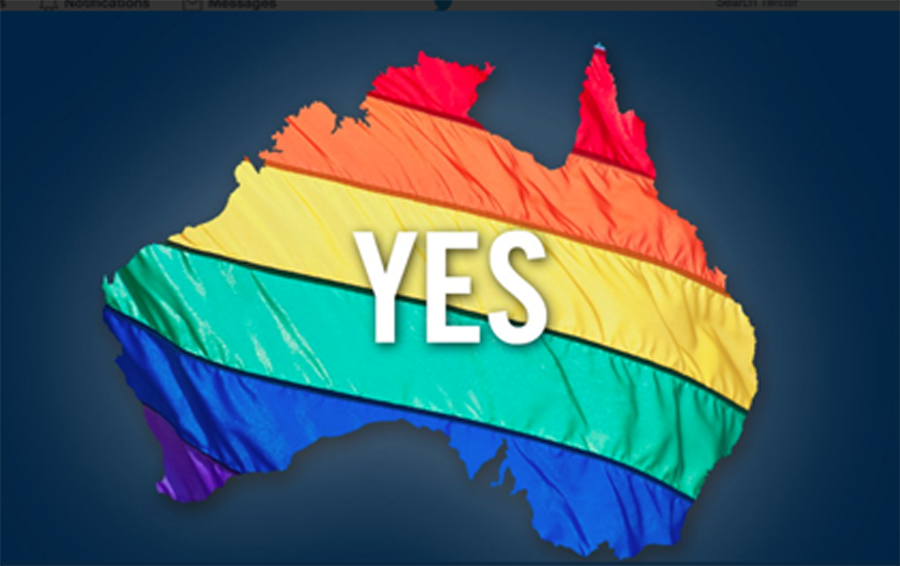