Costa Rica is just months away from a presidential election, set to take place on February 4, 2018. However, the road to the polls seems to be growing darker due to a complex political scandal that reveals the presence and extent of corruption in Costa Rica.

The scandal, popularly known as “Cementazo” (roughly translated as “huge cement blow”), is a puzzle with various pieces: an alleged import deal of cement from China, a dubious loan structure, an amendment of the import rules, and a complex network of people that goes all the way up to the Presidency.

By mid-2017, a series of investigations exposed irregularities in what totaled up to a US $31.5 million loan that the state-owned Bank of Costa Rica (Banco de Costa Rica or BCR) made to real estate developer, Juan Carlos Bolaños, and his firm, Sinocem Costa Rica to import cement from China.

The website CRHoy.com published a 20-minute audio of a conversation that allegedly involved Bolaños and then BCR assistant director, Guillermo Quesada:

This recording […] explains an alleged scheme to avoid paying a $20,000,000 loan that Bank of Costa Rica gave to a cement import businessman with public funds, using as collateral –in case of default– thousands of tons of cement imported from China. The audio […] as per various sources, apparently has some politicians, congressmen and businessmen planning strategies for an “honorable” way out. [As a consequence of all this] The head of BCR [resigned] from her position.

CRHoy also stated that investigations revealed complex influence peddling. It seems there is no information on the whereabouts of the imported cement, which was also the collateral given to BCR for it to approve the loan. Also the “relationship the businessman has with members of all state branches, including congressmen, the Supreme Court of Justice and the Presidential House, as well as members of different political parties”, is under scrutiny.

Bolaños has defended himself by arguing that the loan and the collateral for importing the cement were intended to “put and end to a duopoly” in the local cement industry. According to Bolaños, the Cemex and Holcim duopoly set cement's market prices and manage the industry.

In fact, the duopoly was indeed threatened with the import of cement from China. Import rules which favored the duopoly by targeting foreign cargo — in this case cement — were lifted to allow Sinocem’s Chinese cement shipment to enter Costa Rica while the cement was still en route, on the behest of very high profile political figures. Without the help of these powerful figures, the Chinese cement would not have complied with the tight import restrictions mandated by Costa Rican law, why then did the Bank of Costa Rica sign off on a loan for an import that would otherwise not be allowed to enter the country?

Bolaños insisted he has been a victim of multinational corporations and that his main interest was to provide Costa Rican people with cheaper high-quality cement, putting an end to the duopoly. His claims weren't enough. Juan Carlos Bolaños was arrested in the early hours of November 3 of this year while he was on his way to his estate in Santa Eulalia de Atenas, 40 kilometers from Costa Rican capital, San José.

After Bolaños, other figures that belonged to the state branches fell down too. Besides the resignation of Paola Mora Tumminelli as BCR chair (although not from the board of directors) as well as several managers from the bank, on October 18, 2017, the Supreme Court ruled for a three-month suspension for Courtroom III judge, Celso Gamboa, to investigate his relations with businessman Bolaños. Just days earlier, on October 13, that same legal body had suspended, for three months also, General Prosecutor Jorge Chavarría, to investigate the alleged concealment of evidence during the process.

Outrage is everywhere in the online sphere. Hashtags like #cementazo [huge cement blow], #cementazoCR [huge cement blow in Costa Rica] and #YoNoTengoAmigos [I have no friends], quoting a phrase by President Solís before the Congress Commission that visited him to get his version of events, became trending topics:

About the statements by independent congressman Victor Hugo Morales Zapata on November 6, the Presidential House reaffirms the President of the Republic has no friends and has acted solely on behalf of national interests.
———-
Welcome to the circus! Where the clowns are the owners who believe the public are the animals. ??‍
I have no friends.

A piece of advice to all those involved in “Cementazo”: start being affectionate among you guys, so things get a little less bad for you

They are all involved. The first one who should face the consequences instead of hiding is the president. I have no friends. ???‍♀️

On the discussion of the case and its implications, Medium website author, ¡Seás Tinta!, says they notice an over-simplification of the scandal considering the hashtags. They also argue that these kinds of cases need deeper reflections and less headlines that divert attention from more long-lasting consequences:

Bringing down the discussion, identifying the culprits, simplifying a complex phenomenon, destroying reputations, concealing the real traffic of influences and promoting others’ vested interests. Who will trust a public bank now? Who will want to pay more taxes after what's seen as “giving away money” to one businessman? How to fund public works with a trust? How are we going to go on modernizing the economy with duopolies that are no longer under discussion?

Recently, and during his recovery from surgery, President Solís uploaded a video on Facebook where he repeats he has no friends, and in case someone acted on his behalf, they did it without president's consent: 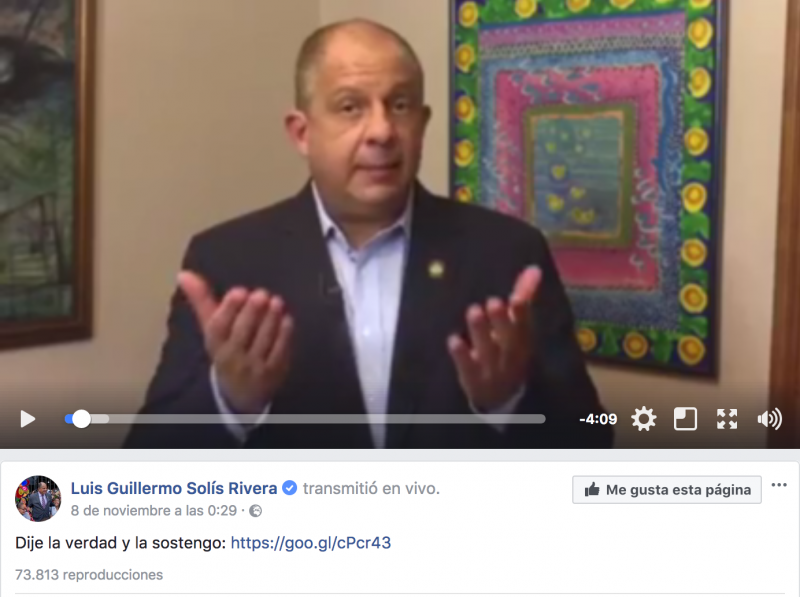 I said the truth and I stick with it.
Uploaded by Luis Guillermo Solís Rivera, on Tuesday. November 7, 2017.

Clearly, public opinion about the Costa Rican representatives has been the first victim of this scandal. Results of a survey carried out on October 2017, show an evident change in the public's perception about government corruption. Although unemployment is still a main issue in Costa Rica, corruption jumped to first position on the list of concerns for Costa Ricans.

This post was written with contributions from Costa Rican professionals under the condition of anonymity.