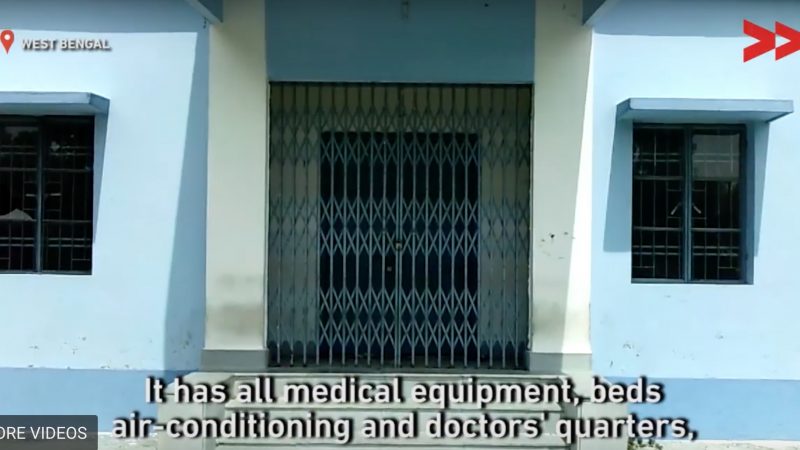 A rural medical facility remains shut due to lack of doctors. Screenshot via a VideoVolunteer report.

In many rural areas of India, many women suffer during childbirth or even die due to a lack of medical personnel or services.

India has succeeded in recent years in reducing the high maternal mortality rate (MMR). Still, about five women die every hour in India from complications developed during childbirth.

The main reasons for maternal mortality are unattended births (with no medical professionals), poor health infrastructure, scarcity of specialists and emergency obstetric services, and most importantly, shortage of doctors in rural areas. According to a study by the Lancet, a UK medical journal:

One of the reasons for this is that most doctors choose to work in cities, rather than move to rural areas. Video Volunteers’ community correspondent from West Bengal Jahanara Bibi reports:

Basanti Roy is an Accredited Social Health Activist (ASHA)in Badalpur village of South Dinajpur District in the Indian state of West Bengal. ASHAs are community health workers, organized by the government of India's Ministry of Health and Family Welfare, who play a pivotal role in ensuring positive maternal health outcomes. But Basanti could not save her own relative:

She was my nephew’s wife. I called the ambulance before her labor pain started but it arrived late. First I took her to the hospital at Rashidpur. There was a delay. Then we took her to the hospital in Kaldigi where they were able to perform a cesarean section on her. After the operations, she started having convulsions. We shifted her to a bigger hospital in the neighboring district of Malda where she passed away.

Government health facilities in West Bengal have repeatedly come under the scanner. A 2014 study found that not only is there a shortage of doctors in the hospitals, but the facilities were also underperforming and inefficient.

The situation in Badalpur is illustrative of this scenario. The primary health center (PHC) there serves a population of 50,000 when government rules mandate that there should be one PHC per 20,000 people. Further, the PHC is operational only between 9 am and 2 pm. Ailing patients have to travel up to 20 kilometers to the next government health facility.

Ambulances are always late. We kept calling but it arrived an hour later. My daughter-in-law had already given birth. We took the mother and child to the hospital and they stayed there for three days. We had to spend quite a lot of money, about 5,000 Indian Rupees (US$76). If we didn’t have to spend so much we could have cared for her nutrition better.

The government’s Janani Suraksha Yojana (JSY) program claims to provide free maternal health and delivery services in addition to a cash incentive of 1,400 Indian Rupees (US$21) to women in rural India who choose to give birth at government health facilities. But in areas like Badalpur where basic facilities are not available, poor families end up spending a large chunk of their income on out-of-pocket expenditures.

According to another report by community correspondent Shambhulal Khatik, government health facilities are ill-equipped to deal with complicated cases of childbirth and are plagued with a shortage of qualified staff. In the vacuum created by the absence of such health facilities, unscrupulous private clinics have started charging exorbitant fees to poor people.

Shambhulal reports that Pushpa Bai, a mother of five children living in a rural area in Rajasthan, died during the birth of a stillborn child due to systemic lapses and negligence in rural healthcare infrastructure.

When Pushpa Bai felt labor pain, her husband Shantilal Lohar took her to the nearest district hospital in an ambulance. There were no doctors in the hospital. Nurses examined her and told her she had two more days to go before her delivery and once again she was sent home.

The very next day she started experiencing excruciating pain. Shantilal hired a car and drove Pushpa to the nearest private clinic, five kilometers away, not choosing to trust the government health facilities. The doctor examined her and started the treatment assuring that everything was fine, the baby was fine. Three hours later their stillborn child was delivered. Pushpa started bleeding in the process and was referred to a district hospital with better facilities and doctors. She eventually died due to blood loss as the final private hospital she was admitted in did not have enough blood in their bank to make up for the continuous blood loss.

The National Family Health Survey (NFHS) reveals that health expenditure in a low-income household is often the cause of indebtedness and impoverishment, with hospitalization costing up to 20 times the monthly income in the poorest households.

The government health institutions lack doctors and reports point to poor working conditions or inadequate professional incentives as the reason for not many doctors wanting to work in rural areas.

What is even more frustrating in the case of Badalpur is that a new hospital, with facilities like inpatient department, doctors’ living quarters and other facilities, was constructed in 2014. But it lies vacant with its fully air-conditioned wards and state-of-the-art equipment because doctors are not willing to get posted in this remote village. While the government of West Bengal has enacted stringent laws to combat medical negligence in private hospitals and nursing homes, more clearly needs to be done to improve services provided through the state health care facilities.